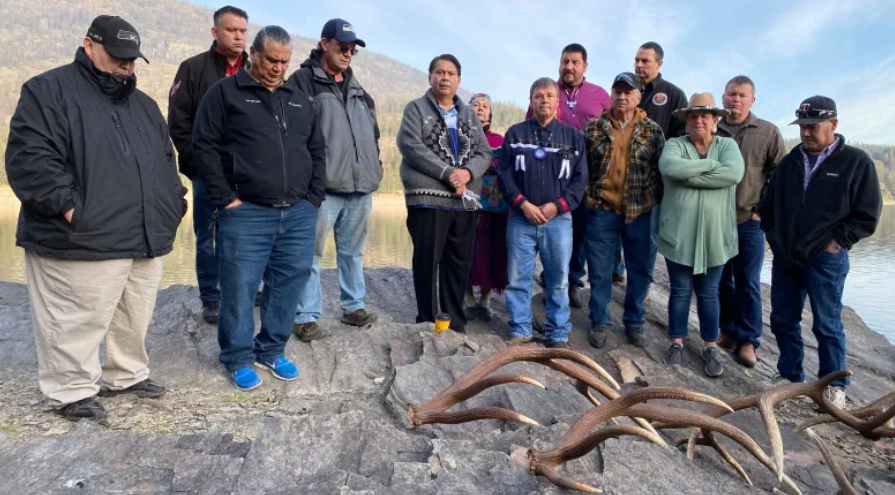 Above photo: Sinixt members of the Confederated Tribes of the Colville Reservation gathered for a prayer event in Kettle Falls, WA. before the Supreme Court of Canada released its decision. Shelly Boyd.

Decision looked at whether Native Americans have right to use traditional lands in Canada.

In a 7-2 decision, the Supreme Court of Canada said the Sinixt Nation, whose reservation is in Washington state, has constitutionally protected Indigenous rights to hunt in their ancestral territory north of the border.

The ruling means that if Indigenous groups outside of modern-day Canada can prove they descended from a pre-contact society in what is now Canada, they can claim Section 35(1) rights under the Constitution, which recognizes and affirms the rights of Indigenous Peoples.

“Persons who are not Canadian citizens and who do not reside in Canada can exercise an Aboriginal right,” the decision said.

The high court said the Sinixt, part of the Salish people who primarily occupied territory in the B.C. Interior and form the Lakes Tribe in northwestern United States, did not “lose” their identity by moving within their traditional territory south of the Canada-U.S. border.

“Accordingly, the Lakes Tribe is an Aboriginal people of Canada,” the decision said.

‘I did my happy dance’

The case began in 2010 when Sinixt leaders sent one of their members, Richard Desautel, to shoot and kill an elk in their traditional territory of the Arrow Lakes region in southeastern British Columbia to reclaim their identity in Canada.

Desautel phoned the B.C. Conservation Officer Service after his successful hunt to report himself and was charged.

Desautel is a member of the Lakes Tribe of the Colville Confederated Tribes based in Washington state, a successor group of the Sinixt people. He argued his right to hunt for ceremonial purposes in the traditional territory of the Sinixt is protected by Canada’s Constitution.

The Crown maintained Desautel didn’t have rights protected by the Constitution because he wasn’t part of any recognized Indigenous group in Canada.

Desautel won at every level of the B.C. court system, laying the groundwork for the Sinixt to be formally recognized again on Friday as an Indigenous people by the Supreme Court of Canada.

“I did my happy dance for almost half an hour,” Desautel told CBC News.

“I feel very gratified and very relieved that I’m not extinct.”

Hunting is how the Sinixt people practise their culture and their very identity is bound up with their territory, which stretches from West Kootenay to Nelson and all the way up to Revelstoke, B.C, according to Desautel’s counsel Mark Underhill.

Not being able to use their traditional lands has taken a tremendous toll on multiple generations of Sinixt people, he said.

“You always have that tie back to the land, no matter where you are,” said Underhill, who is a partner at Arvay Finlay LLP in Vancouver.

“To have it illegal to be able to practise your culture, it just really impacted those people.”

An important case on both sides of the border

The decision could have broad implications for other Indigenous groups with ties to Canada, but Underhill said those groups would have to show they maintained a continuous presence in territory that became part of Canada.

“That will open the door for them hopefully to have their rights recognized in Canada,” Underhill said.

Now that the Sinixt have reclaimed their identity in Canada, they are planning their next steps, which may include negotiations with Ottawa and the B.C. government.

“We can reunite again with Sinixt members in Canada and rebuild a confederacy of all the Sinixts people to address and work with many of the ministries of British Columbia,” said Rodney Cawston, chair of the Colville Confederated Tribes.

The federal government told CBC News it is analyzing the impact of the decision. Cawston said there is a lot of work ahead on things such as figuring out border crossings.

“That isn’t our border,” Cawston said of the U.S.-Canada boundary. “Our people travelled back and forth all across our landscape of our traditional homelands.”

Marilyn James, an autonomous Sinixt matriarch in Canada, said she’s heard nothing from the Sinixt in the U.S.

“We’d like them and their Sinixt members to come here and fully embrace these traditional practices and laws that we wish to see upheld … and not to join a confederacy of other tribal groups,” James said.

James said the Indian Act still doesn’t recognize her people as a legitimate First Nation. She said she will continue to petition the government to strike the extinction declaration.

“We welcome the possibility that this is a toe in the door to being recognized,” James said.

All levels of court ruled in Sinixt’s favour

The Supreme Court of Canada agreed with the trial judge, who held that the Sinixt engaged in hunting, fishing and gathering in their traditional territory in the Arrow Lakes area before and after first contact in 1811.

The trial judge said Desautel was exercising his traditional right to hunt for ceremonial purposes guaranteed under the Constitution, and the application of the Wildlife Act unjustifiably infringed on that right.

The Sinixt say they lived in the north-south valley stretching from present-day Kettle Falls, Wash., to Revelstoke, B.C., well into the 1700s. Eighty per cent of their pre-contact traditional territory is in Canada.

Smallpox and the arrival of missionaries, miners and settlers pushed the Sinixt out of the West Kootenay region of B.C. and off their territory. Some moved south to the U.S., taking up residence on the Colville Confederated Tribes reservation in the late 1800s.

In 1902, the federal government set aside a reserve for the Arrow Lakes Band, which included a few Sinixt members who remained in their traditional territory in Canada.

In 1956, the last living member of the Arrows Lakes Band died and the federal government declared the Sinixt “extinct” and without the rights of a First Nation in Canada.