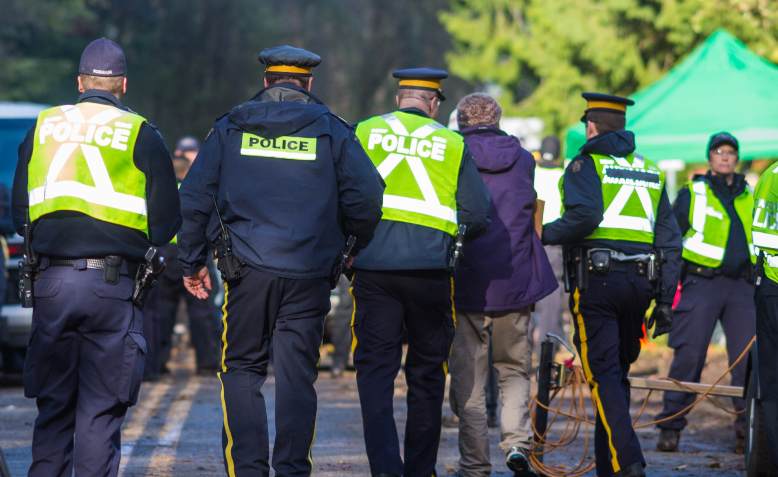 The Existence Of A Tailor-Made Security Service To Protect The Interests Of Polluting Companies Shows Clearly Just Who The Police Are There To Serve And Protect In This Society.

The expansion of oil and gas exports has become a strategic priority for a major section of the capitalist class in Canada and its political enablers. The declining possibilities for export to the US, moreover, have led ‘business and political leaders…to pivot to East Asia, particularly China.’ This has involved the development of the required infrastructure in the western provinces, including the construction of major pipelines.

Obviously, this whole initiative can only compound the impacts of climate change and other forms of environmental degradation. It has also put the Canadian state on a collision course with Indigenous nations who are determined to prevent such an assault on their traditional territory. On both fronts, there has been powerful resistance that will certainly intensify, as these reckless and destructive plans are put into effect.

In British Columbia, the Royal Canadian Mounted Police (RCMP) has been more than ready to act in the interests of the ‘extractive industries,’ as they the pursue their objectives. This is hardly surprising but what is shocking is the incredible lengths the force has gone to in order to provide a tailor made repressive force that can clear the way for these business interests.

The Aboriginal Peoples’ Television Network (APTN) has drawn up a report, entitled ‘Behind the Thin Blue Line,’ that examines the role of a ‘secretive arm of the RCMP in BC’ that operates under the name of the Community-Industry Response Group (C-IRG). The picture that emerges is one of a sinister and brutal tool of state repression that exists for no other purpose than to loyally ‘serve and protect’ a section of the capitalist class. As such, the report is as fascinating as it is horrifying to read.

APTN shows how C-IRG was established and explores its objectives and methods of operating. The BC RCMP’s own website states that this special formation ‘was created in 2017 to provide strategic oversight addressing energy industry incidents and related public order, national security and crime issues.’ APTN, however, uncovers a disturbing reality that those carefully chosen words are intended to conceal.

As the report asserts, ‘the real reason the outfit was created (was) to protect pipelines, specifically the Trans Mountain expansion and Coastal GasLink.’ It tells us that ‘Prominent First Nations activists call them ‘Indian fighters’ and ‘oil and gas mercenaries.’ One person, who has been on the receiving end of the C-IRG’s role in ‘addressing industry incidents,’ recalls that ‘They were in blue and black, had facemasks, were in full combat gear, wearing sunglasses so you could not see their faces, had guns on their hips and had handcuffs,” she claimed. ‘It was clear that they were there to enforce an injunction by any means necessary.’

APTN put months of investigation into this report ‘obtaining more than 4,000 pages of court files and releases from more than two dozen federal and provincial freedom of information requests.’ It ‘uncovered a broad suite of allegations against the unit that include intimidation, torture, brutality, harassment, racism, theft, destruction of property, arbitrary detention, inhumanity, lying and deceit.’

The report details the use of the most brutal and invasive methods against Indigenous land defenders and those driven to take action in the interest of environmental protection. The unit ‘has been casually monitoring the political activity of peaceful law-abiding groups based on fears that unknown extremists, professional protesters and agents provocateurs may use violence to support the cause.’  Indeed, RCMP officers quoted in the report frequently justify their methods by making unsubstantiated claims on the threat of violent activity. As one of their ‘operational plans’ puts it, ‘given some past events there could be public order issues arising from radical environmental activists and provacateures [sic] who may attempt to escalate an otherwise peaceful protest.’

APTN looks at the deployment of C-IRG and several situations in which they have functioned in the most overt fashion as a ‘pipeline police,’ including ‘three heavily armed raids on Wet’suwet’en territory,’ in 2019, where land defenders were challenging pipeline construction. The standard excuse that there were ‘some radical and potentially violent elements clearly in support’ was used to justify this conduct.

A ‘three-phased raid plan’ was developed in which the second phase would unleash a massive show of force. ‘An RCMP riot squad known as a Tactical Troop (or Tac Troop) would swoop in alongside a paramilitary SWAT unit known as an Emergency Response Team (ERT) followed by a dog unit, liaison team, criminal investigators, transportation and logistical support.’ There were also snipers on hand to ‘Back the Tac Troop with lethal overwatch.’

A review was conducted after ‘The raid garnered public outcry for its paramilitary style’ which laughably concluded that there had been, on the part of those subjected to this deployment of armed force, a ‘perception of intimidation, not the fact of it.’

The report provides a great deal of detail on the brutal methods employed by C-IRG. This includes using ‘pain compliance techniques’ against protesters that have included ‘gouging a protester’s eyes with a face hold, at Fairy Creek.’ At the same location, in 2021, APTN describes a situation where ‘Mounties douse protesters with streams of pepper spray. They rip surgical masks off faces in the crowd, knock off their hats and rub the burning chemical agent in their eyes.’ The account includes one independent media producer being told ‘You do one more thing and I’ll dose you, bitch.’ She asserts that ‘There was no name tag or badge number displayed on the officer’s uniform.’

C-IRG operates with a command structure that enables it to discharge its function as effectively as possible. It’s most senior officer, the gold commander, ‘sets strategic objectives and deals with bureaucrats and RCMP higher-ups.’ This frees up the silver commander to ‘oversee daily operations, including enforcing injunctions and planning raids.’ A series of bronze commanders in each of the RCMP’s regional districts then ‘deploy the resources and execute the silver plan.’ All the officers who participate in the work of the unit do so as volunteers and they are shifted from their normal police function on an as need basis. Their total number is a closely guarded secret.

The report considers the background and experience of some of the leading figures in the unit. The present overall leader, ‘Chief Supt. John Brewer, served as silver commander from 2017 until June 2021. He is a nearly 30-year veteran involved in domestic and international policing operations including in Afghanistan, according to court files. He’s a former member of an RCMP Emergency Response Team (ERT), the force’s militarized SWAT units.’

C-IRG works closely with federal intelligence agencies and the pipelines they are protecting ‘were designated national critical infrastructure by the federal government, meaning a federal counterterror squad, known as an Integrated National Security Enforcement Team (INSET), is monitoring protest actions related to these projects.’

It is also clear that the unit has a very active working relationship with private security operations that  are employed by the resource extraction companies. For example, ‘court files show Mounties colluded with Teal-Jones’s private security agents and helped them infiltrate Fairy Creek camps to conduct covert surveillance operations then feed this information back to the RCMP.’ The report makes it strikingly clear that the private security companies that C-IRG works so closely with are brimming with former RCMP officers. The line between state enforcers and company police is an exceedingly thin one.

It must be said that this special unit of the RCMP is no aberration but that it is an ugly continuation of the role that the RCMP has always discharged. It’s forerunner, the North-West Mounted Police, was established in 1873, as a paramilitary force that would be used to drive the Indigenous nations into reserves, in order to open a path for incoming settlers. As a colonial force, it was modelled on the Royal Irish Constabulary (RIC). To this day, the RCMP inflicts its brutally racist brand of social control on hundreds of Indigenous communities across Canada and its most senior officer has been compelled to acknowledge the force’s ‘systemic racism.’

The APTN report utterly demolishes any notion of impartial policing in the public interest. C-IRG operates as a tailor made security service for resource extraction companies that are focused on profit driven activities with dire environmental consequences and that trample on the rights of Indigenous people. The existence of a unit like C-IRG represents the clearest possible demonstration of just who the police are there to serve and protect in this society.