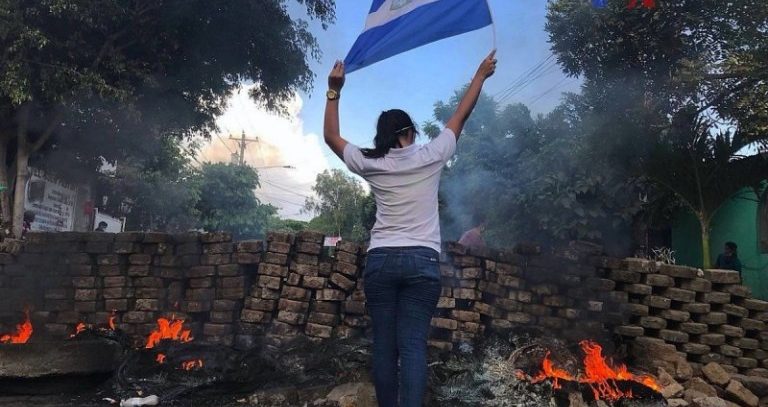 Above photo: A woman stands near a burning barricade holding Nicaraguan flag, April 2018.

Canada is supporting US efforts to overthrow Nicaragua’s government.

A recently leaked USAID document highlights “the breadth and complexity of the US government’s plan to interfere in Nicaragua’s internal affairs up to and after its presidential election in 2021.” The stated aim is to replace president Daniel Ortega with “a government committed to the rule of law, civil liberties, and a free civil society.” HighlightingWashington’s aim, Ben Norton notes, “the 14-page USAID document employed the word ‘transition’ 102 times, including nine times on the first page alone.”

Recently Canada’s representative to the Organization of American States, Hugh Adsett, joined five other countries in calling on the OAS’ Secretary General to organize a special session focused on human rights and democracy in Nicaragua. At the recent OAS meeting Adsett criticized Nicaragua, saying the Covid-19 pandemic “should not be used to weaken democracy”.

Ottawa has supported a number of OAS resolutions and initiatives targeting Nicaragua’s government. Along with the US, Paraguay, Jamaica and Argentina, Canada was part of the 2019 OAS High-Level Diplomatic Commission on Nicaragua, which Managua blocked from entering the country. The commission claimed there was an “alteration of constitutional order that seriously affects the democratic order” in Nicaragua. But, the group failed to win majority support at the OAS General Assembly.

Ottawa has severed aid and sanctioned officials from a government former US national security adviser John Bolton listed as part of a “troika of tyranny” (Venezuela, Cuba and Nicaragua). Ortega’s government is part of the Venezuela-led Bolivarian Alliance for the Peoples of our America (ALBA), which is a response to North American capitalist domination of the hemisphere.

Since the Sandinistas’ won power in 2007 poverty rates dropped substantially in the nation of six million. The government expanded access to electricity in rural areas and doubled the proportion of electricity from renewable sources to over half. Access to drinking water has increased as have health indicators improved. Women’s role in parliament grew sharply and Nicaragua’s murder rate remained a fraction of its northern neighbours. According to a July 2019 UN report, there were 8.3 murderers per 100,000 Nicaraguans compared with nearly 70 murders per 100,000 in El Salvador and Honduras.

A little more than a year after his third consecutive election victory a protest movement challenged Ortega’s presidency. Ostensibly what unleashed the uprising was a social security reform pushed by the International Monetary Fund. But, pension benefits were largely maintained with the government offloading most of the cost on to employers. Despite a relatively working-class friendly reform, many student organizations and NGOs aligned with the major employer federation, the wealthiest Nicaraguans and the conservative Catholic church to oppose the government. Many of these groups were financed and trained by the US government’s National Endowment for Democracy, USAID and Freedom House, which is close to the CIA. The movement was greatly influenced by Washington, which has long been powerful in the small, impoverished, country.

The protests quickly turned violent. At least 22 police officers were killed and as many as 300 lost their lives in politically related violence during 2018. The North American media and internationally connected NGOs blamed the government for all the rights violations. But, this was absurd, as the death toll of police highlight. It was also public knowledge that opposition rebels had been attacking government supporters for years. In March 2016 the New York Times published a long sympathetic story headlined “Ortega vs. the Contras: Nicaragua Endures an ’80s Revival” about a small number of anti-government rebels targeting police stations and Sandinistas in rural areas.

Still, Canadian officials blamed the government — either implicitly or directly — for the violence. Between April 23 and July 18, 2018, Global Affairs put out at least four press releases critical of the situation in Nicaragua. Chrystia Freeland’s statements became steadily stronger with the former foreign minister eventually demanding an immediate end to the “violence, repression, arbitrary detentions and human rights violations” and for “the government of Nicaragua to help create the conditions for safe, peaceful, and constructive discussions.” Subsequently Canada’s foreign minister questioned Ortega’s democratic legitimacy. In June 2019 Freeland declared, “Canada will continue to stand with the people of Nicaragua and their legitimate demands for democracy and accountability.” But, Ortega won the election in a landslide and it’s hard to imagine that he suddenly lost all support.

In March 2016 the New York Times reported, “Mr. Ortega enjoys strong support among the poor” while eight months later The Guardian noted he “cemented popular support among poorer Nicaraguans.” At the end of 2016 Ortega was re-elected with 72% of the vote in an election some in the opposition boycotted.

The Liberals raised the conflict in Nicaragua in international forums. At a Women Foreign Ministers’ Meeting in Montréal in September 2018 Freeland said “Nicaragua” was one of “the pressing issues that concern us as foreign ministers.” The “situation in Nicaragua” was discussed between Freeland and foreign minister Aloysio Nunes at the third Canada-Brazil Strategic Partnership Dialogue a month later.

Ten months later Canada sanctioned nine Nicaraguan government officials, including ministers and the president of the National Assembly. Individuals’ assets were frozen and Canadians were prohibited from dealing with said persons. The sanctions were adopted in co-ordination with Washington. “United States and Canada Announce Financial Sanctions to Address the Ongoing Repression in Nicaragua”, noted the US State Department’s release.

The Liberals’ stance towards Nicaragua contrasts sharply with its words and actions towards its Central American neighbour Honduras. While Canada condemned Ortega, severed aid and sanctioned officials, it maintained friendly relations and aid spending after Juan Orlando Hernandez defied the constitution by running for a second term as president and then brazenly stole the election.

The Liberals regime change efforts in Nicaragua are part of a broader pro-US/corporate policy in the hemisphere rife with hypocrisy.