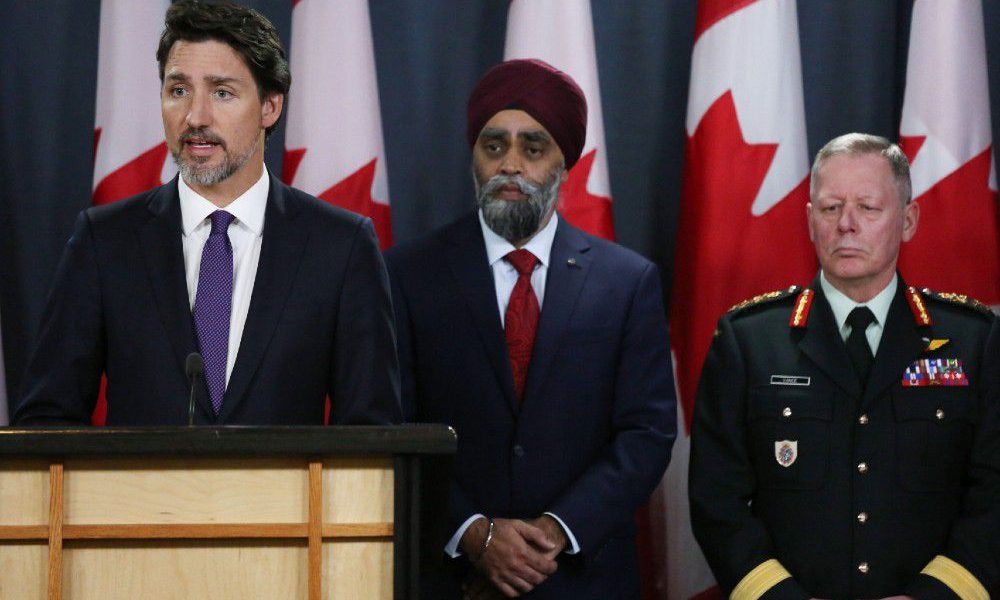 Canadian Military Wants To Use Propaganda, Other Techniques Domestically

NOTE: Business Insider reports that an amendment to the United States’ National Defense Authorization Act in 2012 repealed the Smith-Mundt Act of 1948 provision that banned the use of government propaganda domestically. They write:

“The Smith-Mundt Modernization Act of 2012 appears to serve this purpose by allowing for the American public to be a target audience of U.S. government-funded information campaigns.”

The Canadian Forces wants to establish a new organization that will use propaganda and other techniques to try to influence the attitudes, beliefs and behaviours of Canadians, according to documents obtained by this newspaper.

The plan comes on the heels of the Canadian Forces spending more than $1 million to train public affairs officers on behaviour modification techniques of the same sort used by the parent firm of Cambridge Analytica, as well as a controversial and bizarre propaganda training mission in which the military forged letters from the Nova Scotia government to warn the public that wolves were wandering in the province.

The new Defence Strategic Communication group will advance “national interests by using defence activities to influence the attitudes, beliefs and behaviours of audiences,” according to the document dated October 2020. Target audiences for such an initiative would be the Canadian public as well as foreign populations in countries where military forces are sent.

The document is the end result of what Chief of the Defence Staff Gen. Jon Vance has called the “weaponization” of the military’s public affairs branch. The document is in a draft form, but work is already underway on some aspects of the plan and some techniques have been already tested on the Canadian public.

But the office of Defence Minister Harjit Sajjan said Sunday that the plan, at least for now, is not authorized to proceed. Sajjan has raised concerns about some of the activities related to such influence and propaganda operations. “No such plan has been approved, nor will it be,” Floriane Bonneville, Sajjan’s press secretary, said after being asked by this newspaper about the initiative.

But a series of town halls were already conducted last week for a number of military personnel on the strategies contained in the draft plan.

The report quotes Brig.-Gen. Jay Janzen, director general military public affairs, who stated, “The motto ‘who dares, wins’ is as applicable to strategic communication as it is to warfare.”

The initiative also proposes the creation of a new research capability established to analyze and collect information from the social media accounts of Canadians, non-governmental organizations, industry and the news media, according to the report.

The Canadian Forces have already tested that capability earlier this year. This newspaper reported that a team assigned to a Canadian military intelligence unit monitored and collected information from people’s social media accounts in Ontario, claiming such data-mining was needed to help troops who were to work in long-term care homes during the coronavirus pandemic.

That initiative, aimed at people’s Facebook, Twitter and Instagram accounts, involved collecting comments made by the public about the provincial government’s failure to take care of the elderly. That data was then turned over to the Ontario government, with a warning from the team it represented a “negative” reaction from the public.

Military officers see nothing wrong with such collection of data as it is already in the public domain on social media accounts. They concede the team should not have been assigned to military intelligence, but under the new plan it will be controlled by the military’s public affairs branch.

But others have questioned how collecting information on the public’s views concerning Ontario Premier Doug Ford was even relevant to how the Canadian Forces were to care for elderly residents. In addition, concerns have also been raised on why the military turned over such data to Ford’s government and what became of it.

Sajjan requested an investigation be done into the data collection and has also limited at least temporarily some of what the military calls influence activities.

The military, however, noted in the plan that it will consult the federal privacy commissioner before it launches its collection of Canadians’ online information.

The public affairs enhancement plan reflects the military leadership’s view they can shape and direct the attitudes of Canadians if the right techniques are applied. “Defence StratCom will focus on effects and outcomes among key audiences and will provide clear direction on aligning actions, efforts and resources in pursuit of strategic objectives,” the plan added.

Some in the Canadian Forces already attempted to conduct a trial run of such techniques.

This newspaper reported in July the military had planned a propaganda campaign aimed at heading off civil disobedience by Canadians during the coronavirus pandemic. That campaign was to use similar propaganda tactics to those employed against the Afghan population during the war in Afghanistan, including loudspeaker trucks to transmit government messages. The propaganda operation was halted after concerns were raised about the ethics behind such techniques.

The public affairs enhancement plan also calls for harnessing the social media accounts of select Canadian Forces staff to push out pre-approved government and military messages to the public. Although the social media activity would be seen to be coming from the personal accounts of military personnel, it would actually be Canadian Forces public affairs officers behind the scenes crafting and coordinating the messages.

The enhancement plan also calls for improving links to military-friendly academics and retired senior military staff so they can be used to push out approved Canadian Forces messages either on social media or in their interactions with journalists.

Sajjan had originally approved the weaponization of public affairs initiative, started in 2015, along with a separate but significant expansion of military propaganda capabilities for various units. The Liberals outlined in their 2017 defence strategy policy the need for the Canadian military to become more involved in propaganda and information warfare.

But attempts to influence the public haven’t always worked out. Last year, the Department of National Defence and the Canadian Forces planned a public relations campaign to counter what bureaucrats and officers believed were false claims that the military had a problem with racists in the ranks. But that plan had to be scuttled after alleged racists and far-right sympathizers with links to military became involved in a series of high-profile incidents, undercutting the message of the PR scheme that the severity of the issue had been exaggerated.

As part of that PR effort, dossiers were created about journalists the military believed would cover the issue of racists in the ranks, including the CBC’s Murray Brewster. The dossier about Brewster, who has since broken a number of stories about the far-right in the Canadian Forces, contained transcripts of his interviews with senior military staff and the warning, “He’s familiar with the defence system, and his reporting, while factual, often emphasizes the mistakes and shortcoming of DND and the CAF.”

Bonneville said the minister did not and will not authorize the creation of the dossiers on journalists. She did not, however, provide an explanation on why the files were created by Canadian Forces staff.

In addition, under Sajjan’s watch, an invitation-only Facebook page has been created where serving and retired military and DND public affairs staff share information about journalists. There are more than 400 participants on the Facebook page, which is officially supported by the DND.