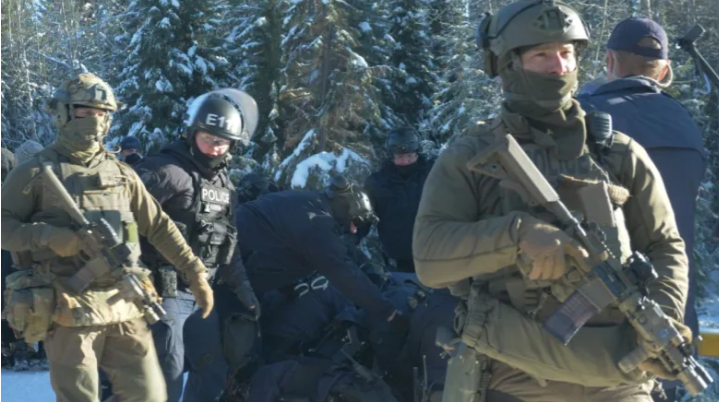 The RCMP arrested 15 people on Thursday November 18 as the land defence struggle against the construction of the Coastal GasLink fracked gas pipeline on Wet’suwet’en territory in northern British Columbia continues.

Gidimt’en land defender Sleydo’ says: “[The RCMP] came with intent and the ability to kill people and seriously harm people.”

According to an RCMP statement, those arrested are being held at the RCMP detachment in Houston. Gidimt’en Checkpoint notes: “They will be brought to Smithers for bail hearings tomorrow [Friday November 19].”

PBI-Canada will be travelling to Smithers for this.

CBC reports: “One resistance camp — dubbed Coyote camp — still remains, occupying a site slated to be used by CGL crews to drill the pipeline beneath the Wedzin Kwa river.”

Sleydo’ told CBC that the remaining group plans to stay and protect the river. She adds: “Drilling under the headwaters would be disastrous for our drinking water. We currently drink right out of the river. Protecting the river is critical to our livelihood.”

An RCMP statement says: “Moving forward, police resources will be in the area to ensure that the roads remain accessible and unobstructed.”

An “exclusion zone” set up by the RCMP that prohibits travel past the 29-kilometre point of the Morice River Forest Service Road remains in place.

Notes from a RCMP strategy session prior to that raid show that RCMP commanders stated that “lethal overwatch is req’d” and that officers were instructed to “use as much violence toward the gate as you want” ahead of the operation to remove a roadblock established by Wet’suwet’en land defenders.

In December 2019, the United Nations Committee on the Elimination of Racial Discrimination called on Canada to stop construction of the Coastal GasLink pipeline on Wet’suwet’en territory and to remove the RCMP from those lands.

Ignoring that resolution, a second RCMP raid was launched just weeks later on February 6, 2020. Twenty-two land defenders were arrested at that time.

Canada was required to submit a report this past Monday November 15 to the UN Committee on its compliance with the Convention on the Elimination of All Forms of Racial Discrimination, but Canada has now delayed that until an unspecified date in 2022.