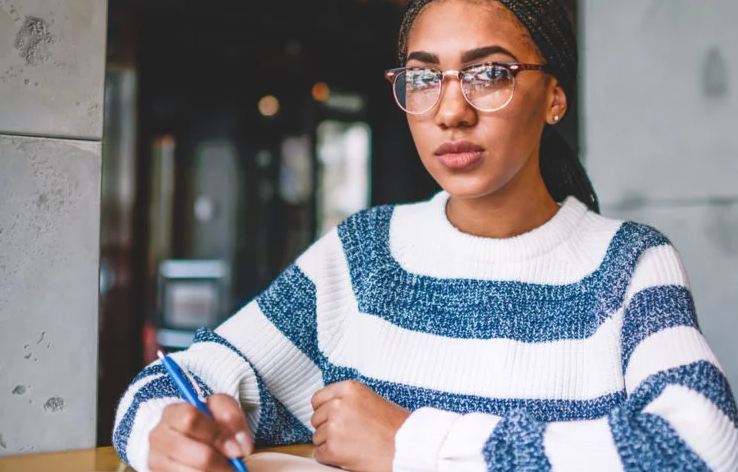 Cancel All The Student Debt: It’s About Economic And Racial Justice

Above Photo: Black students bear a particularly heavy financial burden from higher education. Because of their families’ likely financial position, which is rooted in a persistent unjust racial wealth gap, Black students often take on more debt than white students and have less family resources to pay off that debt. Shutterstock

Only full cancellation completely protects the vulnerabilities of Black students and students in general, while at the same time establishing higher education as a universal right and offering restitution to all those who have had to rely on debt finance.

You might feel desensitized to the swelling student-debt figures, but guess who’s not? Graduates—who are paying an average of $400 a month for approximately forever. There are two major proposals from Democratic presidential candidates on this problem. One gets rid of it all, canceling the whole student-debt balance nationally. The other cancels $50,000 of student debt for households with under $100,000 in income, and smaller amounts for those with higher incomes.

There has been some confusion about how each proposal would affect Black students and the racial wealth gap. We contend that limited cancellation, while a substantial improvement on the status quo, is likely to leave more than one million Black students and their families carrying debt, according to our analysis of the 2016 Survey of Consumer Finances. Only full cancellation completely protects the vulnerabilities of Black students and students in general, while at the same time establishing higher education as a universal right and offering restitution to all those who have had to rely on debt finance. Our perspective might run contrary to some commentary, including in Rewire.News, but it is grounded in historical and empirical analysis.

First, the current crisis of student debt is a historical aberration. The aggregate amount of student debt has more than tripled in the past 13 years from under $500 billion to more than $1.5 trillion. Black students bear a particularly heavy financial burden from higher education. Because of their families’ likely financial position, which is rooted in a persistent unjust racial wealth gap, Black students often take on more debt than white students and have less family resources to pay off that debt.

The concept of loan cancellation, while especially needed at the current moment, is not entirely new. For instance, the Bush administration brought us the public service loan forgiveness program in 2007. This program was intended to erase student debt for teachers, other public servants, and anyone working in a nonprofit organization, after they work in the field for ten years while paying toward their debt. Borrowers would also have to consolidate their loans and enroll in a particular type of repayment plan. These stipulations are complicated enough that the program has failed to provide relief to the vast majority of borrowers, even those verifiably working in nonprofits or government. Over the program’s history, more than 90,000 borrowers have submitted employer-verified applications, but only 845 have gotten relief—that’s less than 1 percent. The other 99 percent were rejected primarily on technical grounds.

GET THE FACTS, DIRECT TO YOUR INBOX.

Want more Rewire.News? Get the facts, direct to your inbox.

The two new proposals would each improve on the existing, almost absurdly ineffectual, policy described above. One proposal is means-tested and capped, wiping away $50,000 of student-loan debt for borrowers earning less than $100,000 in household income and phasing out from there up to households earning up to $250,000. Fifty-thousand dollars of loan cancellation would be a substantive improvement, especially in the context of the status quo. Still, the other proposal would fully eliminate the outstanding balance of every student loan for every borrower. Everyone would be eligible, and all debts would be relieved. And that means everyone, including Black graduates of costly private universities, or Black parents with sizable PLUS loans, many of whom owe more than $50,000. The full cancellation would serve to alleviate the debt burden of millions of Black students and graduates with debt—along with, yes, a fraction of wealthy whites.

When considering a $50,000 cap, keep in mind that, on average, Black graduates owe $53,000 four years after graduation. With $50,000 in debt cancellation, the average Black student would owe a lot less, yet many would still be left with substantial sums of debt. In contrast, the average white graduate four years after graduation carries less debt: below $30,000 on average, all of which would be wiped away under the capped relief program.

Some critics have expressed skepticism, arguing that full cancellation would be racially regressive, benefiting white borrowers more than Black borrowers. The argument goes that more debt probably indicates a graduate or professional degree, which white students are more likely to obtain. In that case, wouldn’t a full cancellation of the higher levels of debt, above $50,000, really just help white students? Similar critiques have been offered for the partial relief program and are exaggerated for full cancellation. The first problem with this argument is that a large and growing share (47 percent in 2008) of Black students enroll in a graduate degree program within four years of completing their bachelor’s, which is higher than the rate for white recent graduates.

The other concern is that a full cancellation might favor white debtors in a way that increases the racial wealth gap. At best, the evidence is mixed. A compelling recent study finds the opposite: that a full cancellation of student debt would reduce racial wealth disparities. Black students tend to take on more debt at every level of higher education. Black students are also more likely than white students to drop out of university because of financial concerns—in large part because of the same financial issues that led them to take on debt in the first place. So at each level of higher education, undergrad and grad, removing student debt proportionately benefits Black students more.

The real problem with the racial wealth gap argument is that it confuses the urgent problem of student debt with the urgent problem of racially unequal access to capital. Relieving student debt is not the policy tool for eliminating the racial wealth gap. The racial wealth gap has a great deal more to do with a lack of assets for Black families than an abundance of debt on the part of Black students and graduates. The fact that Black families headed by a college graduate have less wealth than white families headed by a high school dropout is not driven by student debt. That inequity stems from the insufficient assets of the Black community, regardless of education. The young Black person will start out in a less favorable economic position than their white peers, whatever their student debt. Neither a full nor a limited cancellation changes those roots of the racial disparity in assets.

This is not to say there is no connection between student debt and the racial wealth gap. Families with financial advantage can “buy” crucial advantages for their children, such as the ability to obtain a college degree without accruing costly educational debts. Lack of wealth (primarily inherited wealth) prevents many Black families from accessing this advantage.

Nonetheless, the alarming trend of student indebtedness, which in the context of stagnating real wages and growing income and wealth inequality points to an alarming economic vulnerability in the United States, needs to be addressed. The bad news is that this iterative and intergenerational problem may be getting worse. A recent report illustrates that the aftermath of the Great Recession, along with record levels of student debt accumulation, has left the homeownership rate for young adult millennials lower than for every other generation at a similar age dating back about 100 years to the greatest generation, who were entering young adulthood right after the Great Depression. What’s more, the racial disparity in homeownership for young millennials is as large as it has ever been.

Black Americans are highly motivated to pursue education, but the reality is that as a group, they are financially stymied. Fewer Black students begin college, even fewer graduate, and those that do graduate carry much more debt than their white counterparts. While student debt has conventionally been thought of as “good debt,” the investment generates widely disparate rates of return by race within the prevailing social framework that subjects Black people to inferior housing and educational products, predatory finance, and labor market discrimination. These, along with other reasons, are why we enthusiastically applaud proposals that remove the financial stress and social and psychological stigma associated with the burden of tuition and fees at public universities and community colleges, for all students. Furthermore, we fully support proposals that implement retroactive justice by canceling the burden of all existing student debt. We can do the right thing and establish higher education as a universal economic right.