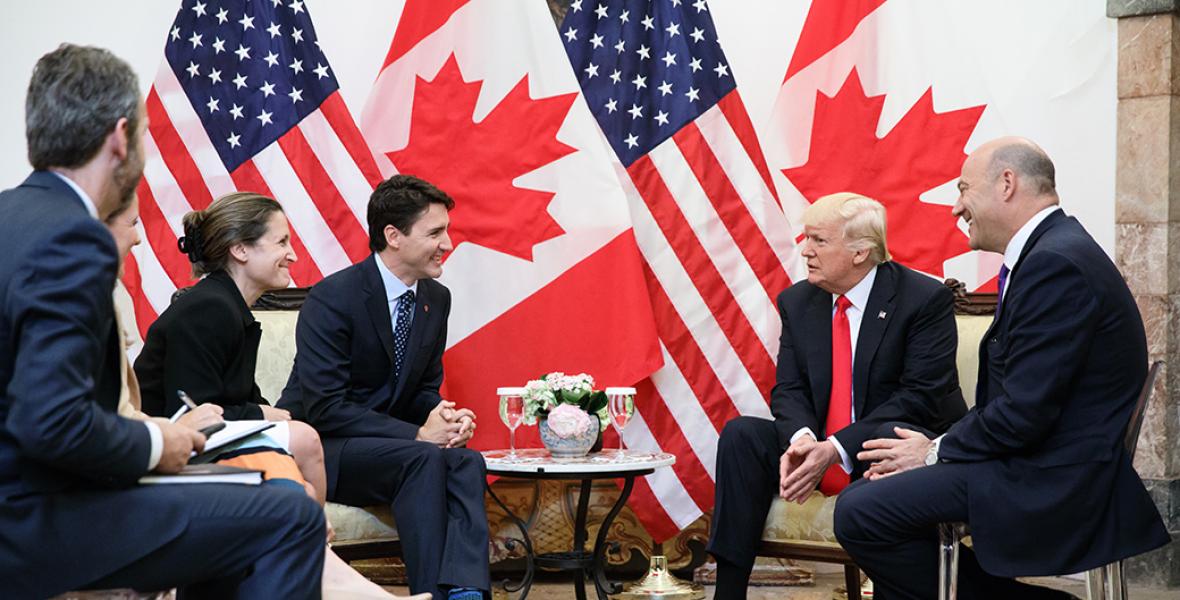 Canceling NAFTA Could Be The Best Way Forward

Canada – Have you ever wondered what would happen if you called the bully’s bluff? As Liberal members of Parliament return to their seats in the House of Commons, they need to consider the sometimes-veiled opportunities that political bullying provides. Are you listening, Foreign Affairs Minister Chrystia Freeland?

More than 20 years ago, I was someone who campaigned and organized against the passage of both the Free Trade Agreement (FTA) and the North American Free Trade Agreement (NAFTA). I was devastated, like many others, when both passed, first the FTA and then later NAFTA, enabled by the Liberals, and supported over the years by various shades of Conservatives.

The results of almost 30 years of free trade have not borne fruit for workers, the environment or family farmers.

Over the years the U.S. has placed one barrier in front of another, and Canada has spent incredible energy trying to defend some of the public systems that have created a bit of equality in this country. Whether it be health care, supply management, or the now defunct Canadian Wheat Board, among others, various U.S. administrations have been quick to call Canada’s regulations unfair trade practice, protectionist, or simply and blatantly, unfair competition. Go figure — the powerful U.S. couldn’t handle the public component of Canada’s governance. Probably because it helped alleviate some of the pain of living in a profit-driven system.

As U.S. President Donald Trump rambles and rumbles about cancelling NAFTA, I keep thinking — what if we called the bully’s bluff? The result would no doubt be much better than succumbing to any of his suggestions for change. In the process, food producers and working people could rid themselves of an all-around bad deal.

In August, as renegotiations of NAFTA began, farm groups from Canada, the U.S. and Mexico issued statements about the process and denounced the directions of the talks. Farmers in Mexico called for transparency. And American farm groups have noted that trashing Canada’s supply management system will not benefit U.S. farmers, any more than increasing exports will ensure fairness for farmers and the price of their products.

“This whole process should begin with a thorough, independent evaluation of NAFTA’s economic, social, environmental and governance impacts,” notes Victor Suarez, Executive Director of the Mexican National Association of Rural Producers (ANEC). “The goal should be to restore national sovereignty over food and farm policy, and to support local farming communities.”

Suarez and other progressive farm people know that NAFTA has always been about much more than trade. The tri-country treaty has set rules on investment, but also farm exports, food safety, access to seeds and access to markets. It has also been about the consolidation and merging of agri-business corporations, and the loss of family farms and their communities. Basically it has been about following a profiteering model of food production and consumption as detailed in, among others, Eric Schlosser’s 2001 book Fast Food Nation or Raj Patel’s dazzling analytical tome, Stuffed and Starved, published in 2007.

Representatives of small family farmers from across the continent also have lots to say about the negative impact of NAFTA.

“Under NAFTA and its forerunner, the Canada-U.S. FTA, farm input costs have gone up and inflation-adjusted commodity prices have dropped, yet the farmer’s share of the grocery dollar is smaller,” says National Farmers Union President Jan Slomp. “We export more, but imports have increased faster, which means our share of our own domestic market is actually shrinking. NAFTA and the FTA have not helped farmers. Since 1988 we have seen one in every five of our farms disappear and we’ve lost over 70 per cent of our young farmers, even though Canada’s population has increased.”

NAFTA has not benefitted working people in Canada, or the U.S., let alone the working people of Mexico. NAFTA, like many agreements since, was really the first multi-country agreement to consolidate corporate control and investment. It was never designed to protect workers, human rights, communities, or family farms. It was meant to increase the profits of large corporations through trade.

The Donald appears to be particularly vexed by the dispute resolution clause in NAFTA and by Canada’s system of supply management. The dispute clause, known as Chapter 11, is the only provision that has allowed some semblance of fairness on some issues such as softwood lumber. Canada’s supply management system was born way before NAFTA and so far has managed to survive despite the constant challenges by U.S. administrations.

As Parliament heads back after the summer recess, the Liberal government and Minister Chrystia Freeland need to take a tough stand on these two items and not budge an inch. Either that, or as the Canadian Centre for Policy Alternatives’s Bruce Campbell has noted, prepare an exit strategy and encourage cancellation of the so-called trade agreement. If Trump insists on his concessions, this may be the best way forward.

For farmers and working people of the three countries, cancelling the deal might just be a super idea. It would astonish most of us to actually think that — for different reasons, obviously — we could agree with The Donald. But, as they say, politics makes for strange bedfellows!

In an article for the CCPA Monitor, former CCPA executive director Bruce Campbell raised a number of points worthy of reflection. It’s important to keep in mind that NAFTA was never designed as a treaty that would enforce labour, environmental or human rights; rather, it was designed as an investment treaty. For that reason, Mexican workers, who have a very low rate of unionization, were the most affected by NAFTA and have seen their living standards and wages drop substantially, Campbell notes.

The Institute for Agriculture and Trade Policy has tracked the impact of NAFTA over the decades and has released a primer called NAFTA Renegotation: What’s at stake for food, farmers and the land? as well as collecting 25 years’ worth of research on the trade deal.

“NAFTA has woven our economies together in ways that hurt family farmers, workers and our environments. We need a new approach to trade that promotes local and regional food systems, including providing for mechanisms in all three countries to shelter food crops from volatile markets and dumping. Simplistic calls to expand exports won’t get us to the fair and sustainable food and farm system we need.”

What many of these voices seem to be emphasizing is clear: a bad deal is not a deal that can be repaired.

Lois Ross is a communications specialist, writer, and editor, living in Ottawa. Her column “At the farm gate” discusses issues that are key to food production here in Canada as well as internationally.