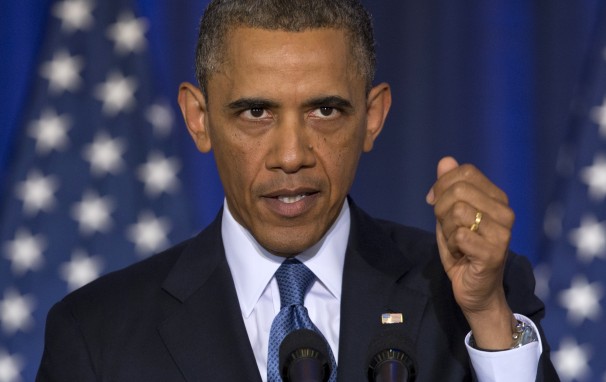 Candidate Obama Said The President Did Not Have Unilateral War Power

The issue of whether President Obama needs congressional approval to go to war is coming to a head as two letters have been sent to him by more than 120 Members of Congress telling his that Congress must be involved in this decision.

We reprinted the views of President Obama and Vice President Biden before they were in their current offices.  See “The Rush To An Illegal War: Obama Should Seek Congressional Approval,” both said congressional approval was needed unless the U.S. was acting in self defense. Then Senator Biden threatened impeachment of President George W. Bush if he took the country to war without the support of Congress. Below we reprint a full interview on national security with candidate Barack Obama where he is quite clear on the limits of presidential power in regards to taking the nation to war.  We share then-Senator Biden’s view, failure to get congressional approval for a military attack is an impeachable offense.  We do not think a war with Syria is justified nor in the national interest and most Americans agree.  James Madison, who is credited with being the primary drafter of the U.S. Constitution, declared the war powers clause the most important in the document because no one person should have the power to take the nation to war.

“The President does not have power under the Constitution to unilaterally authorize a military attack in a situation that does not involve stopping an actual or imminent threat to the nation.”

1. Does the president have inherent powers under the Constitution to conduct surveillance for national security purposes without judicial warrants, regardless of federal statutes?

The Supreme Court has never held that the president has such powers. As president, I will follow existing law, and when it comes to U.S. citizens and residents, I will only authorize surveillance for national security purposes consistent with FISA and other federal statutes.

2. In what circumstances, if any, would the president have constitutional authority to bomb Iran without seeking a use-of-force authorization from Congress? (Specifically, what about the strategic bombing of suspected nuclear sites — a situation that does not involve stopping an IMMINENT threat?)

The President does not have power under the Constitution to unilaterally authorize a military attack in a situation that does not involve stopping an actual or imminent threat to the nation.

As Commander-in-Chief, the President does have a duty to protect and defend the United States. In instances of self-defense, the President would be within his constitutional authority to act before advising Congress or seeking its consent. History has shown us time and again, however, that military action is most successful when it is authorized and supported by the Legislative branch. It is always preferable to have the informed consent of Congress prior to any military action.

As for the specific question about bombing suspected nuclear sites, I recently introduced S.J. Res. 23, which states in part that “any offensive military action taken by the United States against Iran must be explicitly authorized by Congress.” The recent NIE tells us that Iran in 2003 halted its effort to design a nuclear weapon. While this does not mean that Iran is no longer a threat to the United States or its allies, it does give us time to conduct aggressive and principled personal diplomacy aimed at preventing Iran from developing nuclear weapons.

3. Does the Constitution empower the president to disregard a congressional statute limiting the deployment of troops — either by capping the number of troops that may be deployed to a particular country or by setting minimum home-stays between deployments? In other words, is that level of deployment management beyond the constitutional power of Congress to regulate?

No, the President does not have that power. To date, several Congresses have imposed limitations on the number of US troops deployed in a given situation. As President, I will not assert a constitutional authority to deploy troops in a manner contrary to an express limit imposed by Congress and adopted into law.

4. Under what circumstances, if any, would you sign a bill into law but also issue a signing statement reserving a constitutional right to bypass the law?

Signing statements have been used by presidents of both parties, dating back to Andrew Jackson. While it is legitimate for a president to issue a signing statement to clarify his understanding of ambiguous provisions of statutes and to explain his view of how he intends to faithfully execute the law, it is a clear abuse of power to use such statements as a license to evade laws that the president does not like or as an end-run around provisions designed to foster accountability.

5. Does the Constitution permit a president to detain US citizens without charges as unlawful enemy combatants?

No. I reject the Bush Administration’s claim that the President has plenary authority under the Constitution to detain U.S. citizens without charges as unlawful enemy combatants.

6. Does executive privilege cover testimony or documents about decision-making within the executive branch not involving confidential advice communicated to the president himself?

With respect to the “core” of executive privilege, the Supreme Court has not resolved this question, and reasonable people have debated it. My view is that executive privilege generally depends on the involvement of the President and the White House.

7. If Congress defines a specific interrogation technique as prohibited under all circumstances, does the president’s authority as commander in chief ever permit him to instruct his subordinates to employ that technique despite the statute?

No. The President is not above the law, and the Commander-in-Chief power does not entitle him to use techniques that Congress has specifically banned as torture. We must send a message to the world that America is a nation of laws, and a nation that stands against torture. As President I will abide by statutory prohibitions, and have the Army Field Manual govern interrogation techniques for all United States Government personnel and contractors.

8. Under what circumstances, if any, is the president, when operating overseas as commander-in-chief, free to disregard international human rights treaties that the US Senate has ratified?

It is illegal and unwise for the President to disregard international human rights treaties that have been ratified by the United States Senate, including and especially the Geneva Conventions. The Commander-in-Chief power does not allow the President to defy those treaties.

9. Do you agree or disagree with the statement made by former Attorney General Gonzales in January 2007 that nothing in the Constitution confers an affirmative right to habeas corpus, separate from any statutory habeas rights Congress might grant or take away?

10. Is there any executive power the Bush administration has claimed or exercised that you think is unconstitutional? Anything you think is simply a bad idea?

First and foremost, I agree with the Supreme Court’s several decisions rejecting the extreme arguments of the Bush Administration, most importantly in the Hamdi and Hamdan cases. I also reject the view, suggested in memoranda by the Department of Justice, that the President may do whatever he deems necessary to protect national security, and that he may torture people in defiance of congressional enactments. In my view, torture is unconstitutional, and certain enhanced interrogation techniques like “waterboarding” clearly constitute torture. And as noted, I reject the use of signing statements to make extreme and implausible claims of presidential authority.

The detention of American citizens, without access to counsel, fair procedure, or pursuant to judicial authorization, as enemy combatants is unconstitutional.

Warrantless surveillance of American citizens, in defiance of FISA, is unlawful and unconstitutional.

The violation of international treaties that have been ratified by the Senate, specifically the Geneva Conventions, was illegal (as the Supreme Court held) and a bad idea.

The creation of military commissions, without congressional authorization, was unlawful (as the Supreme Court held) and a bad idea.

I believe the Administration’s use of executive authority to over-classify information is a bad idea. We need to restore the balance between the necessarily secret and the necessity of openness in our democracy – which is why I have called for a National Declassification Center.

11. Who are your campaign’s advisers for legal issues?

Gregory Craig, former Assistant to the President and Special Counsel (1998-1999), former Director of Policy Planning for U.S. Department of State (1997-1998)

12. Do you think it is important for all would-be presidents to answer questions like these before voters decide which one to entrust with the powers of the presidency? What would you say about any rival candidate who refuses to answer such questions?

Yes, these are essential questions that all the candidates should answer. Any President takes an oath to, “preserve, protect and defend the Constitution of the United States.” The American people need to know where we stand on these issues before they entrust us with this responsibility – particularly at a time when our laws, our traditions, and our Constitution have been repeatedly challenged by this Administration.