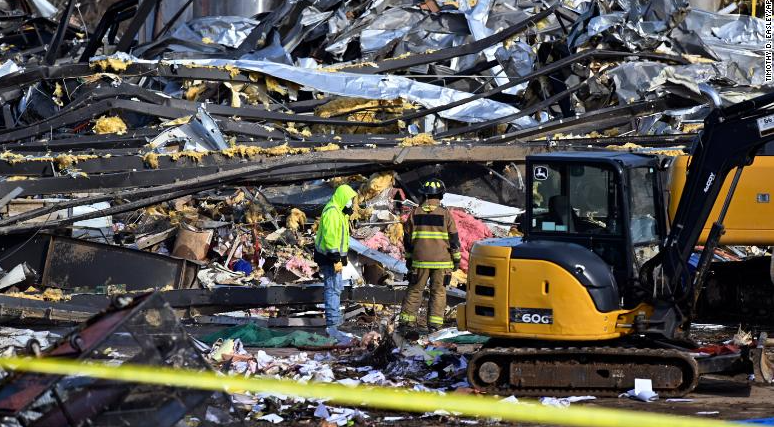 The weekend of December 10-11, 2021, saw a reported 30 tornadoes hitting several states from Arkansas to Illinois; as of this writing, 74 people are confirmed dead and several buildings severely damaged or totally demolished.

All the cases of death and destruction are devastating; however, the most telling and unconscionable are the deaths of eight people at a candle-making factory in Mayfield, Kentucky, and six in an Amazon facility in Edwardsville, Illinois. What makes these two cases significant is that they most likely could have been avoided, but once again capitalism’s insatiable greed is significantly responsible for these people’s death.

The trade union is the most effective tool the working class has in confronting and challenging capitalism in its attack on workers’ rights and quality of life. The tornado catastrophe in Kentucky, especially at the candle-making factory, and the Amazon facility in Illinois, re-emphasizes this point. The respective companies took advantage of the financial position of the workers who, because of the monetary incentive, put themselves at lethal risk. In post-tornado interviews several surviving workers stated that the supervisors did not allow them to leave as warning sirens sounded; one worker was reportedly told by a supervisor that, should they leave, they most likely would be fired.

The factory, Mayfield Consumer Products located in Mayfield, Kentucky, was destroyed on Friday night, December 10, killing eight workers of the one hundred ten on the night shift. Workers were threatened that they would be fired if they left the factory even as the tornado bore down.

The company is the third largest employer in that part of Kentucky and reportedly, in its advertisement for workers, the company states that overtime is mandatory. Mayfield Consumer Products reportedly offers a starting salary of $8.00 per hour, which is 75 cents above Kentucky’s minimum wage. All this is against the background that, in 2019, the state’s safety and health agency fined the company $16,350 for 12 safety violations, seven of which were labeled “serious.”

In Edwardsville, Illinois, six of the fifty workers on duty were killed, mainly because of inadequate shelter preparations; workers reported that they were told to shelter in bathrooms. Compounding the problem was that workers were prevented from taking their cell phones onto the shop floor. In an area susceptible to heavy storms including tornadoes, the use of a cell phone is critical to receiving storm and tornado warnings and also communicating with family.

The cell phone ban policy is profit-motivated, maximizing production with little regard for safety. The facilities should not have been open due to impending severe weather conditions.

A non-unionized workplace is fertile ground for employers to engage in oppressive and unsafe labor practices, make unreasonable work scheduling demands, offer low and disproportionate wages as related to task difficulty, oftentimes not even close to the industry standards, minimal and inadequate safety training courses and, worst, no proper recourse for filing and resolving working condition issues.

Complain and, in numerous cases, you are fired, plain and simple.

Because of wide exposure and struggle by workers and activists, the National Labor Relations Board has ordered a new election for workers at the Amazon facility in Bessemer, Alabama, because of illegal and intimidating union-busting tactics used by Amazon in the period prior to the April 2021 election.

From surveillance and the issuing of “vote no” merchandise to placing Postal Service boxes at the site, Amazon had spared no tactic in attempting to thwart the will and the right of the workers to unionize. While the calling of a new election is appropriate, the bigger issue is that, not once in the history of the labor movement, has any company been seriously punished for engaging in such illegal union-busting tactics.

More often than not these new elections end up in favor of the employers and this one is viewed with skepticism. The first one was so tarnished with irregularities and intimidation from Amazon that fear and mistrust can undoubtedly influence the new one in favor of Amazon as well.

For years workers at the various Amazon facilities have been complaining about oppressive and unsafe labor practices, which have gone unaddressed. The recent deaths at Amazon and Mayfield Consumer Products are the result of capitalists’ insatiable greed and unbridled drive for profits at any cost.

The profit motive of capitalism has no bounds to its arrogance and inhumanity; it is rooted in the most inhumane ideology and mode of production the world has ever seen. It is a system based on socialized production, but private accumulation of the benefits accrued from the exploitation and dehumanization of the workers.

The workers should not be forced or threatened with the loss of their jobs, or even fear losing their jobs, by going home or to some other place of safety, while severe storms are pending. The buildings themselves should have adequate shelter areas, constructed before being occupied, which have the potential to save lives. Storms and tornadoes are unpredictable in location and intensity; however, measures are available that can minimize material damage and loss of life.

After the dust has settled and the initial shock has abated, Mayfield Consumer Products and Amazon will undoubtedly return to business as usual, offering oppressive working conditions and threatening life safety issues.

Unionization is one of the first steps in breaking the back of unchallenged oppression and exploitation at the workplace. The ultimate solution to resolving the antagonistic contradiction between capital and labor is public ownership of the means of production.

Anything less is treating the symptoms and not the cause.