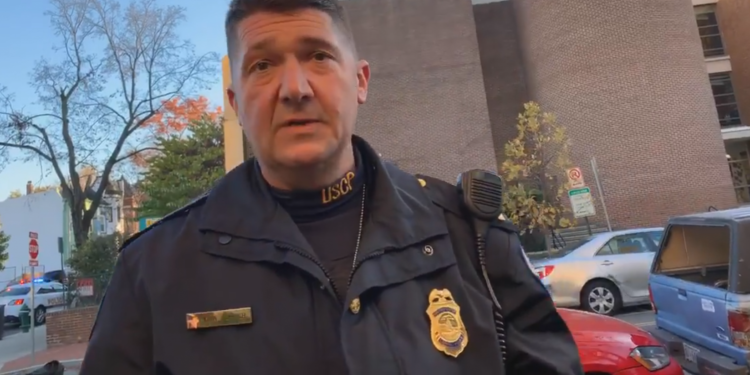 Police in Washington, D.C. surrounded the home of Code Pink activist Medea Benjamin and attempted to arrest her for “assaulting” Democratic Congresswoman Debbie Wasserman Schultz. But police did not have a warrant and apparently were uncertain whether an assault was even committed.

At the House Triangle by Capitol Hill, Wasserman Schultz and Republican Congressman Mario Diaz-Balart announced the formation of a “bipartisan Venezuela Democracy Caucus” to “support freedom for the Venezuelan people, who have endured years of suffering under brutal and illegitimate tyranny.”

In other words, the members of Congress announced a caucus to ensure that support for the floundering coup attempt against President Nicolas Maduro remains strong in the legislative branch.

Activists from Code Pink and other groups were present at the press conference at the Triangle. A group of Venezuela opposition supporters waving Venezuela flags crowded closely around Wasserman Schultz and Diaz-Balart, and Benjamin was able to take a position right next to the congresswoman.

Video was posted by the account for the Venezuela Embassy in D.C., which police helped the opposition seize in May. It shows Wasserman Schultz finishing her statement, and moments after, she yells, “Please, somebody get her out! Out! Out! Out!” She was referring to Benjamin.

It is not entirely audible, however, Benjamin can be heard yelling, “You’re hurting me!” Individuals, who were not police, pulled Benjamin away from Wasserman Schultz like she demanded.

Benjamin shouted something about free speech, as Diaz-Balart tried to give his statement, and then clearly Benjamin was pulled down again. She cannot be seen in the video, but she put her hands on Wasserman Schultz to keep herself from falling on the ground.

“Let go of me!” Wasserman Schultz yells. “Okay, we’re going to need to call the Capitol Police. This woman is assaulting me.”

Footage was recorded by Voz de América, the Spanish version of the United States government-funded state-owned media agency Voice of America. It shows Benjamin as someone at the press conference has their arm around her neck.

“Mr. Balart, tell them to stop choking me. They’re choking me,” Benjamin implores.

People gathered at the press conference were bunched so closely to each other that anyone pushing another person would cause several people to fall like dominos.

The press conference to announce the formation of a pro-opposition caucus occurred at 3 pm. Less than an hour later, Benjamin returned home and immediately realized police were deployed against her. She streamed the attempted arrest on her Facebook page.

“We’re told that there was an assault that occurred on the Triangle earlier,” an officer says to Benjamin. He has the letters “U.S.C.P.” on his turtleneck, which stands for United States Capitol Police, and stood outside the fence around her home.

“You know me. You know me all the time. I don’t assault anybody. I’m a peaceful person,” Benjamin additionally states implying that the Capitol Police are well aware of all her acts of civil disobedience and protest, where she has been arrested without hurting anyone.

She recalls, “I was being pulled by these big guys behind me, and we have all this on footage.”

At that point, the officer who initiated contact with Benjamin informs her she was accused of “assaulting” Wasserman Schultz. He asks if she would be willing to come with the police.

“You’ll be placed under arrest, and/or we’re going to get a warrant for you,” the officer adds.

Benjamin is intimidated by all the police. She points out the escalating presence.

Benjamin launches into her recollection of what occurred. “Debbie Wasserman Schultz was there. I was standing by the side of her, and the right-wing Venezuelans were dragging me down. I grabbed on to whatever I could find, and now they’re saying that I assaulted a congresswoman.”

The same officer suggests the Capitol Police have video camera footage from Capitol Hill with “all the Capitol angles.”

She indicates she would prefer to wait for her lawyer to advise her on what to do next, and not long after, this particular officer mentions police were reviewing footage to see what exactly happened.

Apparently, the Capitol Police had an allegation, did not know if they could substantiate the allegation, but because it involved a congresswoman, it did not matter. They sought to quickly coerce a political activist into submitting to their authority, even if there was no basis for that activist to do so before the allegation was corroborated by police.

Police are afraid that Benjamin would flee. One officer tells her to stay put, even though she is not under arrest.

A second officer, who had not spoken with Benjamin, approaches her. “They’re re-interviewing the victims, the witnesses on scene. We’re trying to figure out exactly what happened, okay? Do you understand? Does that make sense? Any other questions?”

“Yeah, I have questions. Are you arresting the people who attacked me?” Benjamin responds.

The second officer indicates they were “investigating that,” whatever that means. At this point, a detective was on his way.

Shortly after, according to Benjamin, she was informed that she was “free to go” after they had looked over the footage. But she did not know if that meant they would not seek a warrant for her arrest.

Journalist Ford Fischer interviewed Benjamin soon after the attempted arrest. She said she was “very shaken up” by what happened.

“I think it shows how closely the Democratic Party and the Republican Party work hand in glove with the Venezuela opposition, who are very aggressive. We saw what they did at the Venezuela embassy. They attack us. They spit on us. They hit us. And we can’t get them arrested, even when we ask the police to do something.”

There was an instance where someone snatched an activist’s phone at the press conference. The police apparently did nothing in response, according to Benjamin.

Able to speak without the threat from police surrounding her, Benjamin offered Fischer much more detail about the way in which Venezuela opposition supporters allegedly manhandled her.

“When Debbie Wasserman Schultz was speaking, I was standing right next to her, and every once in a while I would say something like, ‘Lift the Sanctions!’ ‘This is all about the votes, Debbie, isn’t it? In Florida!’”

“I was pulled by people behind me. They grabbed me. They choked me. They threw me down, and I was very upset and shaken,” Benjamin claimed.

The attempted arrest by Capitol Police came weeks after D.C. police showed up to journalist Max Blumenthal’s home prepared to execute a “SWAT-style raid.” They arrested him for “simple assault” based on a five-month-old allegation from members of the Venezuela opposition, who besieged the Venezuela embassy in D.C. in April and May.

Ben Rubinstein was at the embassy trying to deliver food to activists, who were authorized by Venezuela government officials to help protect the embassy from takeover by opposition supporters. He was arrested and charged with a crime in May. (The opposition has tried to tie Blumenthal to this political offense.)

On May 16, Margaret Flowers, David Paul, Adrienne Pine, and Kevin Zeese were arrested, as police raided the embassy in violation of the Vienna Convention. They face misdemeanor charges of “interfering with certain protective functions” of the federal government. They could each be imprisoned for up to one year and fined up to $100,000.

*Note: The above report will be updated if Capitol Police return to carry out an arrest against Code Pink activist Medea Benjamin tonight or tomorrow.

**Correction: A prior version of this report indicated D.C. police had attempted to arrest Medea Benjamin. The stream recorded by Benjamin clearly shows an officer with a “U.S.C.P.” turtleneck and vehicles with “United States Capitol” on the side surrounded her home.