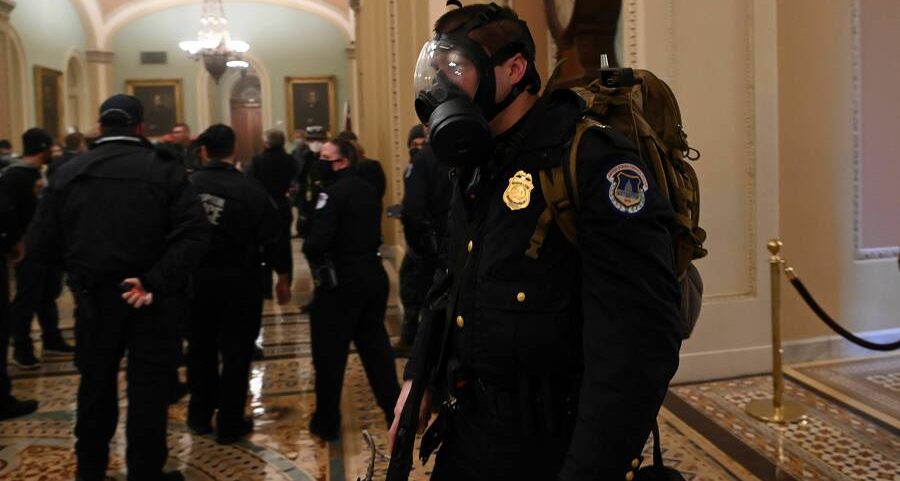 Capitol Police Show Why We Need To Defund The Police

Above photo: A U.S. Capitol police officer wears a gas mask as supporters of President Donald Trump enter the Capitol on January 6, 2021, in Washington, D.C. Saul Loeb/AFP via Getty Images.

On January 6, police showed us exactly who they “serve and protect.”

On January 6, we witnessed the vast double standard for how Black Lives Matter protest is treated versus how white-supremacy-as-mob is treated. This wasn’t just a matter of police refraining from mass beating and arresting participants in the pro-Trump storming of the Capitol: Numerous police appear to have actively supported the mob, and to have defended it after the fact.

First, it’s important to clarify that what happened on January 6 was not a protest. Protest is about seeking redress for wrongdoing — this was backlash. Redress was the November 3 democratic process and recrimination of a criminal president. January 6 was payback and mob rule.

There were numerous accounts and online videos showing police acquiescence to the pro-Trump crowd, shining further light on an institution of policing that has long aligned with a far-right white supremacist ideology. Footage shows members of the Capitol Police posing for selfies with demonstrators, and helping them open doors and move barricades. As Rep. Pramila Jayapal (D‑Wash.) told The Cut, ​“The lack of security at the Capitol is not an accident. It is very clear to me that there were breaches of our law-enforcement agencies. The fact that there were no barriers, that they were essentially allowed in.”

And then there is the alleged participation of off-duty police officers in the storming of the Capitol. Reuters reports that ​“police departments in Virginia and Washington state have placed officers on leave as authorities examine whether they took part in unlawful acts while off-duty.”

But it wasn’t just officers at the Capitol. The head of the Chicago Fraternal Order of Police, John Catanzara, defended the insurrection to WBEZ radio on January 7. ​“There was no arson, there was no burning of anything, there was no looting, there was very little destruction of property. It was a bunch of pissed-off people that feel an election was stolen, somehow, some way,” he said.

What was very much in evidence on January 6, and in the immediate aftermath, was the harmony between the beliefs, tactics and politics of white supremacy and the institution of policing. This alliance is at odds with what we are told about how police ​“serve and protect” the public. Any media consumer was able to see the contradiction with their own eyes.

What better time to question our beliefs and assumptions of the entire idea of policing? After all, the complicit, complacent and selective law enforcement on display January 6 is truly the bulwark of the criminal justice system. Condemnation of this very police racism and violence ricocheted across the country this summer when Black Lives Matter protesters staged uprisings, from Minneapolis to Chicago to Los Angeles.

Yet, leading up to the events of January 6, people in positions of power failed to meet the moment. I’ve heard no civilian mayor make a public call to root out this virulent, right-wing, white-supremacist strain from their police department. I know of not one mayor who has had to manage civil unrest as a result of the killing of Black and Brown bodies who has meaningfully championed the call to burrow deep into their own police department.

I suspect those mayors know what they will find: a strain of white supremacy and duty to protecting capital so deeply rooted it cannot be extracted from policing without dismantling policing. We have seen this again and again during the Trump era. In Minneapolis where I live, the head of the Minneapolis Police Federation, Lt. Bob Kroll, took center stage at an October 2019 Trump rally wearing his Cops for Trump t‑shirt (defying prohibitions against speaking at a political event in uniform) to complain about the Obama administration for ​“the handcuffing and oppression of police.” He then praised President Trump because ​“he decided to start [letting] cops do their job.”

Police are not as much law enforcement as power enforcement, and many Americans had surmised they were on the winning side of power, so they didn’t concern themselves with this problem. But those on the losing end have long recognized police as an instrument of brute power: We know this well in Minneapolis. In 1934 the Minneapolis Police Department was deployed to control a general strike of truckers resulting in two workers dead and 67 injured. In 2020 the Minneapolis Police Department, responding to a call about counterfeit money, killed Black man George Floyd. The same strong-arm tactics were then deployed against Black Lives Matter protestors rallying for George Floyd. Those on the losing end recognize how incredibly consistent this police department has been.

Some are citing the Capitol mob to call for more law enforcement. The events of January 6, for example, have renewed calls for a new domestic terrorism law. According to a report from the Wall Street Journal, a working group advising the Biden campaign is urging the President-elect to ​“create a White House post overseeing the fight against ideologically inspired violent extremists and increasing funding to combat them.” FBI and police have long signaled a desire to increase mass surveillance, including backdoor access to messaging apps and facial recognition software.

But on January 6 we did not see a lack of tools or firepower or budget (the Capitol Police have a budget of half a billion dollars a year): We saw a lack of will. What we really should be calling for is a stronger defense against fascist authority, which includes the power distilled through policing.

The stronger defense is to build a stronger social contract — what educator, activist and writer Mariame Kaba described in a June 2020 New York Times op ed as ​“a different society, built on cooperation instead of individualism, on mutual aid instead of self-preservation.” Kaba insists, ​“We can’t reform the police. The only way to diminish police violence is to reduce contact between the public and the police.”

Instead of investing in a brutal force that fails you at your most acute time of need, we must invest in healthcare, housing, education and meaningful employment. Abolition is a calling to a moral standard and social agreement of the highest order. Abolition wants to hold us to true accountability and repair — not punishment, power enforcement, or mass delusion about law and justice

We spent January 6 seeing in real time that white supremacists and police are magnets to the same metal. In light of this, abolition does not seem radical: It is the most logical next step. Those calling for the dismantling of policing are vindicated by the fact that police so clearly answered the question that has been chanted at racial justice protests across the country: ​“Who do you serve, who do you protect?”

D.A. Bullock is a filmmaker, media-maker, and activist based in Minneapolis, Minnesota.