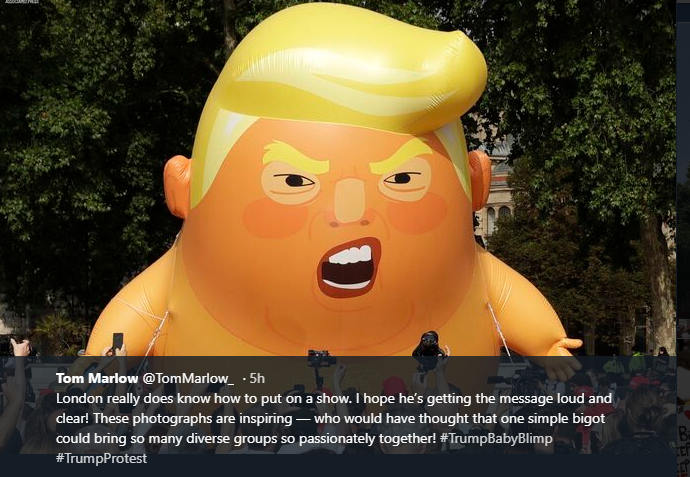 ‘Carnival Of Resistance’ Trump Protests Largest Since The Iraq War

President Trump is being met by mass protests in Great Britain. Everywhere he is expected to go, including London, have held or are planning massive demonstrations. Today, Friday, July 13, 2018, the largest weekday protest in eleven years is taking place in London. The last one was a protest against the Iraq War.  The president avoided directly seeing the protests as his schedulers made sure all of his events were outside of the city.

The London protests involved hundreds of thousands of people taking to the streets to protest Trump, showing historic opposition to a sitting president of the United States.

Jeremy Corbyn spoke at the #TrumpProtest in Trafalgar Square saying: “when somebody on a global stage condemns Muslims because they are Muslims it is not acceptable and we will call it out.” pic.twitter.com/VhAsWnCfQd

Thousands of people have walked out of worklppaces and classrooms to descend on the streets and sent a message to the world: Donald Trump and the racist, capitalist politics he represents, are not welcome here. #TrumpProtest #TrumpProtests #TogetherAgainstTrump #TrumpUKVisit pic.twitter.com/G8Vdk0MO2d

Huge #TrumpProtest in Portland Place. Can’t see how it will move south down Regent St as thousands are still heading north from Oxford Circus, being corralled round onto Mortimer St then Gt Portland St to join rear.. which is now up near the park. pic.twitter.com/FIah4lToX2

The media keep saying @realDonaldTrump won’t see these pictures because he’s busy. So help him out if you can. #TrumpUKVisit pic.twitter.com/Ox2XPkfqEP

Protesters were outside of the US Embassy when Trump arrived in Great Britain. And, they lined the road to Blenheim Palace when Trump attended an event yesterday evening.

The first of the London protests against Donald Trump’s visit outside Winfield House in Regents Park – demonstrators planning to make as much noise as possible overnight to stop Trump getting a good night’s sleep! @LBC pic.twitter.com/BYPhM7GNLn

This is one of the largest demonstrations I’ve ever seen, with tens of thousands shutting down the whole of Regent Street in London. #TrumpVisitUK #TrumpProtest pic.twitter.com/z3FXakxMRp

Great banner from Unite the Union at the #TrumpProtest against Trump’s climate policies. Highlighting too that investing in renewal energy will be fantastic for the economy & for jobs. #TrumpVisitUK pic.twitter.com/F7UEJNBwlt

Protesters were also lined up around Windsor Castle to protest his meeting with Queen Elizabeth.

The same crowd barriers that were in place for the Royal Wedding – but this time they’re lined with protestors ahead of Trump’s arrival at Windsor Castle at 5pm for tea with the Queen @LBC pic.twitter.com/JZieVkiTdF

People in Scotland are preparing for Trump’s visit to Glasgow where he is scheduled to arrive this evening. They are building a “Wall of Resistance”, which will surround a stage where community and political leaders will give speeches. Protests are planned in Edinburgh at Trump Turnberry, a golf course he owns in Ayrshire, where he is expected to play golf on Saturday.  Protesters wanted to fly the baby balloon Trump blimp over the golf course, but were not allowed to do so. The blimp may still make an appearance. Trump is not scheduled to meet Scotland’s First Minister Nicola Sturgeon, who has spoken out against the President numerous times.