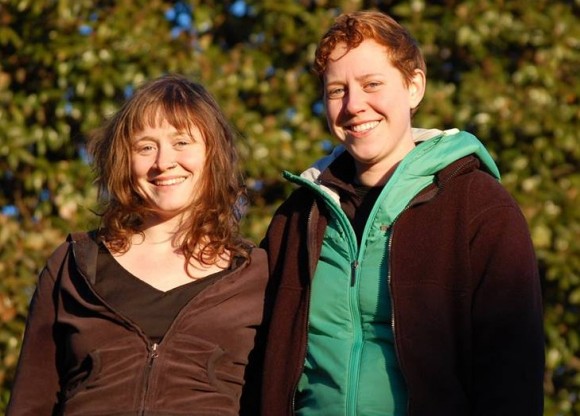 Photo: Carling Sothoron (r) and Heather Doyle (l) were sentenced for a banner drop from crane on Dominion construction site in Cove Point.

Note: Heather Doyle decided not to accept probation and chose to go to jail. She is currently in the Calvert County Detention Center where she will be serving her 40 day jail sentence. Donate to the SEED Coalition legal defense fund here.

Sign the SEED Coalition “Pledge to Resist” and help us to stop the export of fracked gas from Cove Point.

The SEED Coalition writes: There are two things that Heather has asked for in terms of support.

1.  She would love letters.  There are lots of restrictions on what you can send, so please check them out before you lick that stamp! http://www.co.cal.md.us/index.aspx?NID=289.  Her address is:

From Heather, before she went in:  “I would ask for your support in working toward a specific goal that we can bring attention to while I am in jail. We would like to put pressure on the facility to change their book policy to let family, friends and other supporters send books through the mail to incarcerated people. Many facilities allow this sort of mail to come in and place some restrictions on this, such as letting people only have two books. I have known any extra books to be able to be held for the person, with the possibility of also adding to the facility’s library. Right now, Calvert County does not allow any books to be sent in, and people have to order books from the library. We don’t know what sort of resources this library actually has, either. This is the sort of thing that could be different, as every facility can make up its own rules. But they won’t even consider doing more work, or changing this unless we let them know that we care, that folks who are behind bars deserve access to something that could potentially help them. I think it’s hard to argue for not letting people try to educate themselves or provide some relief from the monotony and bleakness of incarceration.

‘So I am asking you, if you are able, to make phone calls to the detention center, to your county commissioners, to the local newspaper, write a letter to the editor, or post on social media. This is something we can do to help people in a tangible way, and I’d like to use the experience I have opened myself up to when choosing arrestable actions for something positive beyond our specific goals. I hope that you will join me in this work. Here’s a start: Please contact Major Reese, the Calvert County Detention Center Administrator. His number is (410) 535-1600, ext. 8902.”

Carling’s sentence is three years probation, 40 days suspended, and a $200 fine.  The fine was reduced from $500 to account for the forfeiture of her climbing equipment during the arrest.Heather and Carling’s cases were heard by a visiting judge from Kent County.  He doubled their days from the rest of the arrestees’ because they both had priors for similar actions.

On April 20, two environmental activists appeared in Maryland District Court in Calvert County on charges related to a protest against the Cove Point LNG plant, in which they climbed up the arm of a crane and dropped a banner at a Dominion Cove Point construction site.

In separate proceedings, Carling Sothoron and Heather Doyle pleaded guilty to charges of trespassing for entering the construction area known as “Offsite A” before dawn on February 3. Charges of failure to obey a lawful order and malicious destruction of property were dismissed for Sothoron and Doyle respectively.

Mark Goldstone, Doyle’s attorney, said that she had mounted the crane with climbing equipment to serve as “belay” to Sothoron as the latter scaled to the top of the crane arm.

From the highest point, Sothoron dropped a banner, which read, “Dominion get out. Don’t frack Maryland. No gas exports. Save Cove Point.”

According to Goldstone, his client acted “to communicate concerns about the LNG plant, the site of a potential catastrophe.”

“A methane leak could cause an explosion,” he warned. He also reminded the judge that exactly five years to the day, BP’s oil rig Deepwater Horizon exploded in the Gulf of Mexico because of a methane gas bubble.

“This is a dangerous and volatile situation,” he said.

Mark Palumbo, Sothoron’s representative, disputed the contention of the state attorney that she had refused to come down at his order. She was cooperative but couldn’t come down because one of the officers at the scene had tied off her equipment.

In accepting their guilty pleas, Judge John E. Nunn III said that he was “sympathetic to the environmental movement.”

“I understand the purpose… to educate people about the dangers of this project,” Judge Nunn said. “But you have to frame your arguments within the confines of the law.”

“How does climbing a crane address this situation?” he asked.

“The activists believe that this [Cove Point LNG] is not a done deal,” he said.Goldstone responded that construction is continuing on the Cove Point project even though the Federal Energy Regulatory Commission’s (FERC) has delayed ruling on a request for rehearing on its certificate of approval. FERC should stop construction until a ruling is made.

Judge Nunn took prior convictions into consideration when sentencing. Sothoron received a suspended sentence of 40 days, 3 years unsupervised probation, $500 fine, $300 suspended, and court costs. She was ordered to stay away from Dominion Cove Point and the construction site. Sothoron, age 28, lives in Baltimore and works as an educator for an urban agriculture project.

Doyle was sentenced to 40 days, with credit for time served. Doyle, age 31, requested jail time over probation because probation would prohibit her from entering jails as a volunteer. Next year, Doyle will begin a Master’s program in dance therapy at the University of Maryland.

Sothoron and Doyle are affiliated with SEED (Stopping Extraction and Exports Destruction) Coalition.

In an interview, Doyle said that Cove Point LNG poses a “catastrophic threat” to the community.

“We wanted the action to be an escalation. Banner hangs are a publicity stunt,” she said. “We want Dominion Cove Point to be on notice that there are people who are willing to take more steps to resist the project.”

Dominion Resources began construction on the conversion of Cove Point LNG into an export facility in October 2014. Although it has been an import terminal for decades, often dormant, Cove Point will become an entirely different facility when it begins to export. The comparatively small site in a populated neighborhood will contain a liquefaction train, a power plant and multiple tanks holding large quantities of combustible materials such as propane and aqueous ammonia, in addition to the existing seven gigantic LNG storage tanks.

Emad Dides, a Calvert County resident present in court on another matter, said he had heard about the expansion of Dominion Cove Point. He doesn’t support it.

“It will pollute the air. The 60-foot wall won’t eliminate noise,” he said. “It will kill wildlife, marine life. It will affect children at the Cove Point Park.”

Dides values having natural gas for his home, and he believes it is a “treasure” that Americans are entitled to before the Chinese or Japanese. (Dominion Cove Point will export LNG to Japan and India.)

But he doesn’t think climbing the crane to make a point about Cove Point was a good strategy. “It’s not an issue of trespass but injury. They risk injuring themselves,” he said.

Doyle, however, contends that she and Sothoron are both “expert climbers” who took precautions.

“Everything we did was done with utmost safety within our system,” she said. “I would never put anyone into a situation where we weren’t trained or equipped.”

She believes that the officers on the scene, in contrast, displayed reckless disregard for their safety.

“This Special Ops Team is supposed to be trained in wide angle rope rescue,” she said. “If they didn’t have those skills, they should have waited to climb up on the crane, or waited for people who operated to get there to assess everything on the ground before they started climbing up.”

On April 7, the Board of County Commissioners awarded Dfc. Robert “Bubba” Brady, Jr. and Dfc. Stephen Esposito a “Team Excellence Award” for their actions on February 3. According to the County’s Award Recognition Committee, Brady and Esposito worked together to bring a “harrowing, high angle rescue” at Offsite A to “a safe and orderly conclusion.”

SEED Coalition released a statement on the sentencing:

We are disappointed but not surprised by the extent of these sentences. They are completely out of proportion to the charges of trespassing to which Heather and Carling pled guilty. However, these penalties reflect a pattern of excessive punishment for peaceful protests undertaken as a last resort in Calvert County. More broadly, we want to use this opportunity to draw attention to the fact that police, courts, and jails are used to sustain a fundamentally unjust system. They subject some people to harsher discipline than others due to their backgrounds or personal characteristics. Heather chose to serve her time in jail so that she will be able to better support and advocate for people in jails and prisons.

NOTE: This article previously stated that Heather Doyle received a sentence 40 days with time served, plus three years’ probation, a stay-away order and court costs. Probation was not part of her sentence, however, and court costs were waived. She is also not required to stay away from Dominion Cove Point.