‘Catharsis On The Mall’ Promotes Healing Through Creativity And Connection

“Catharsis on the Mall” is DC’s smaller version of the Burning Man festival, held annually at the Washington Monument. With thoughtful art or theatrical displays, the organizers offer anyone who wants to come an opportunity for purification, healing and, of course, catharsis through emotional release.

The main draw was supposed to be a giant 60-foot statue of a woman’s body made of opaque curved metal near the flat white stone of the Washington Monument. But the statue was one foot too high, so the permit for the shapely structure could not be secured from the National Park Service. So in its place stood a giant scaffold with banners of a woman, her body partially covered with flora.

This year’s theme for Catharsis was equality embodied by the ten principles of Burning Man for community ethos and culture through visual art, music and dancing, interactive participation, and story-telling. Many people narrated their journeys and struggles in overcoming life-changing obstacles. A variety of tents, booths and art displays encouraged creativity and connective existence with the ten principles: radical inclusion, gifting, de-commodification, radical self-reliance, radical self-expression, communal effort, civic responsibility, leaving no trace, participation and immediacy. 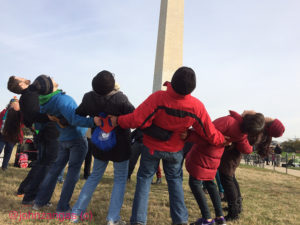 A sage spoke inside a geodesic tent about relationships, intentional living and overcoming challenges while 50 or more people listened intently. A man danced without music dressed in a bathing suit as scores of amused onlookers enjoyed his freestyle interpretation. A group of strangers joined hands to stretch in a series of exercises. Their instructor showed them how to breathe, relax and let go of stress while they closed their eyes. A display called the graphic sex project drew on public feedback to illustrate a spectrum of sexual preferences. An activist told of their journey of healing after discovering the depth of childhood injury.

There were safe spaces created for transgender and Black Lives Matter, lovers, singles seeking others, a love tent made of soft giant hearts, a 30-foot enclosed house made of reflective sheets to give one a chance to visualize their center from many directions. There was an enchanted forest next to a grove of cherry trees, a bus converted into a giant dragon, a giant metal cube made of hanging crystal balls, and a miniature post office to leave write letters of encouragement for display. There were mirrors to look at the “true self” and help viewers to “see” their personality, art healing projects, sculpture and a graffiti project.

There were veterans who described a need for peace and attested to the personal costs of war. They shared their life experiences in stories as a gift from one generation to the next, the old to the new.

There were a variety of panel discussions with a goal of sharing stories to help focus group energy towards individual healing. Several movies were shown and focus groups were organized for discussing social issues.

Others were attracted to the possibility of change, or looking for new creative directions, something different, transformation, or longing for a better way of life, for cooperation and new unity, or understanding. 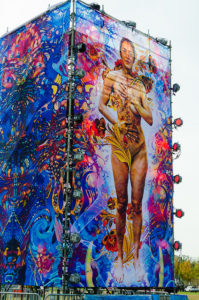 Debbie Baxter, a visual artist, invited participants to disrobe and helped them pose in a life-size nest. “For me, the best is about going back to home, safety and nurturing,” said Baxter. She wove the nest out of materials she collected in the local area. Her vision was for the project to help heal in “response as an artist and mother to the ever-growing pain, injustice, devastation, and wounding of our culture,” she wrote on her website. “It’s very cathartic because it’s allowing them to just let go and be,” she said. She photographed her subjects as a part of the project she plans to publish.

A sculptor from Howard University demonstrated how interactive art could transform and heal. Daryl Green, the only student majoring in Sculpture Art, designed a 1,600-lb. metallic structure in tribute to his brother, Wade Green, a deaf dancer. He collected various pieces of discarded metal and worked for four months creating the giant sculpture. “It’s a tribute to change, and this is about welcoming new energy,” he said.

The annual Catharsis on the Mall offered needed relief and new pathways to healing following a year marked by division and an acrimonious political and social discontent. It was an appropriate time for this to be held in Washington, DC. 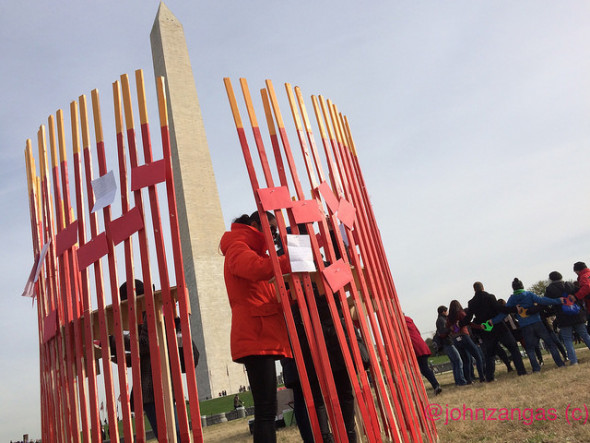 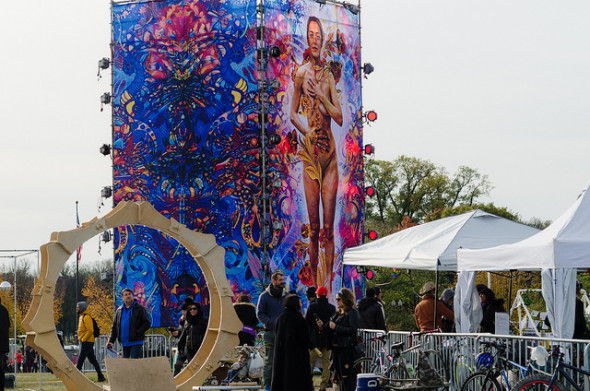