Above Baltimore National Improved Medicare for All protest in Baltimore, MD February 2017. Photo by Kevin Zeese. 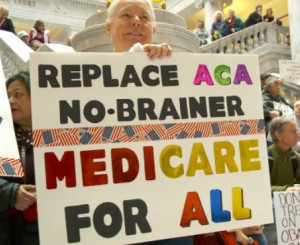 Note: Below is the report of the Congressional Budget Office (CBO) and the Joint Committee on Taxation’s (JCT) scoring the Republican healthcare plan. The report shows the critics were right: the Republican plan is health care cuts for the people and massive tax cuts for the rich. In a separate analysis, Margaret Flowers describes the plans of Republicans and Democrats as putting a price on the value of life.

The report’s conclusion is totally believable, despite President Trump, his Secretary of Health and congressional Republicans claiming it is not accurate. Repealing the ACA should result in going back to pre-Obamacare levels of people without insurance — about 50 million people. It is worth noting that an internal White House review found even higher numbers of uninsured, 26 million newly uninsured people compared to the CBO’s 24 million. 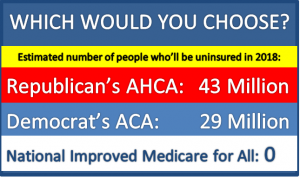 To put these numbers into perspective, a consistently accurate measure is that for every one million not covered there will be 1,000 deaths — so the Republican plan will result in 50,000 excess deaths annually. The ACA, with 29 million without insurance, results in 29,000 annual deaths. Neither plan is acceptable when we have the alternative of improved Medicare for all, which results in everyone being covered.

The corrupt bi-partisans in Congress, that is funded by healthcare profiteers from the insurance industry, pharmaceuticals and investors who profit from healthcare, is unwilling to do the obvious — expand and improve Medicare to cover everyone. Medicare for all could be put in place in less than a year and save money since one-third the cost of healthcare comes from the insurance industry’s expenses and the bureaucracy it creates for doctors, hospitals and other healthcare providers. Medicare has served a difficult population since 1965 — the elderly — with very low overhead (about 1.5%). It is very popular among the elderly, including Tea Party members! Why not build on what works? 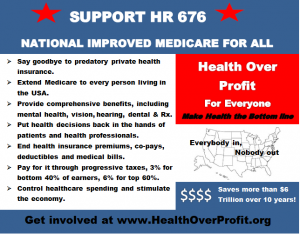 This CBO report is an excellent opportunity to educate Congress, their staff and the public on the advantages of National Improved Medicare for All. See www.HealthOverProfit.org for more information. MF and KZ

Analysis of the American Health Care Act by CBO and JTC

The Concurrent Resolution on the Budget for Fiscal Year 2017 directed the House Committees on Ways and Means and Energy and Commerce to develop legislation to reduce the deficit. The Congressional Budget Office and the staff of the Joint Committee on Taxation (JCT) have produced an estimate of the budgetary effects of the American Health Care Act, which combines the pieces of legislation approved by the two committees pursuant to that resolution. In consultation with the budget committees, CBO used its March 2016 baseline with adjustments for subsequently enacted legislation, which underlies the resolution, as the benchmark to measure the cost of the legislation.

Effects on the Federal Budget

The largest savings would come from reductions in outlays for Medicaid and from the elimination of the Affordable Care Act’s (ACA’s) subsidies for nongroup health insurance. The largest costs would come from repealing many of the changes the ACA made to the Internal Revenue Code—including an increase in the Hospital Insurance payroll tax rate for high-income taxpayers, a surtax on those taxpayers’ net investment income, and annual fees imposed on health insurers—and from the establishment of a new tax credit for health insurance.

To estimate the budgetary effects, CBO and JCT projected how the legislation would change the number of people who obtain federally subsidized health insurance through Medicaid, the nongroup market, and the employment-based market, as well as many other factors.

Later, following additional changes to subsidies for insurance purchased in the nongroup market and to the Medicaid program, the increase in the number of uninsured people relative to the number under current law would rise to 21 million in 2020 and then to 24 million in 2026. The reductions in insurance coverage between 2018 and 2026 would stem in large part from changes in Medicaid enrollment—because some states would discontinue their expansion of eligibility, some states that would have expanded eligibility in the future would choose not to do so, and per-enrollee spending in the program would be capped. In 2026, an estimated 52 million people would be uninsured, compared with 28 million who would lack insurance that year under current law.

Stability of the Health Insurance Market

Decisions about offering and purchasing health insurance depend on the stability of the health insurance market—that is, on having insurers participating in most areas of the country and on the likelihood of premiums’ not rising in an unsustainable spiral. The market for insurance purchased individually (that is, nongroup coverage) would be unstable, for example, if the people who wanted to buy coverage at any offered price would have average health care expenditures so high that offering the insurance would be unprofitable. In CBO and JCT’s assessment, however, the nongroup market would probably be stable in most areas under either current law or the legislation.

Under current law, most subsidized enrollees purchasing health insurance coverage in the nongroup market are largely insulated from increases in premiums because their out-of-pocket payments for premiums are based on a percentage of their income; the government pays the difference. The subsidies to purchase coverage combined with the penalties paid by uninsured people stemming from the individual mandate are anticipated to cause sufficient demand for insurance by people with low health care expenditures for the market to be stable.

Under the legislation, in the agencies’ view, key factors bringing about market stability include subsidies to purchase insurance, which would maintain sufficient demand for insurance by people with low health care expenditures, and grants to states from the Patient and State Stability Fund, which would reduce the costs to insurers of people with high health care expenditures. Even though the new tax credits would be structured differently from the current subsidies and would generally be less generous for those receiving subsidies under current law, the other changes would, in the agencies’ view, lower average premiums enough to attract a sufficient number of relatively healthy people to stabilize the market.

Starting in 2020, the increase in average premiums from repealing the individual mandate penalties would be more than offset by the combination of several factors that would decrease those premiums: grants to states from the Patient and State Stability Fund (which CBO and JCT expect to largely be used by states to limit the costs to insurers of enrollees with very high claims); the elimination of the requirement for insurers to offer plans covering certain percentages of the cost of covered benefits; and a younger mix of enrollees. By 2026, average premiums for single policyholders in the nongroup market under the legislation would be roughly 10 percent lower than under current law, CBO and JCT estimate.

Although average premiums would increase prior to 2020 and decrease starting in 2020, CBO and JCT estimate that changes in premiums relative to those under current law would differ significantly for people of different ages because of a change in age-rating rules. Under the legislation, insurers would be allowed to generally charge five times more for older enrollees than younger ones rather than three times more as under current law, substantially reducing premiums for young adults and substantially raising premiums for older people.

The ways in which federal agencies, states, insurers, employers, individuals, doctors, hospitals, and other affected parties would respond to the changes made by the legislation are all difficult to predict, so the estimates in this report are uncertain. But CBO and JCT have endeavored to develop estimates that are in the middle of the distribution of potential outcomes.

Because of the magnitude of its budgetary effects, this legislation is “major legislation,” as defined in the rules of the House of Representatives. Hence, it triggers the requirement that the cost estimate, to the greatest extent practicable, include the budgetary impact of its macroeconomic effects. However, because of the very short time available to prepare this cost estimate, quantifying and incorporating those macroeconomic effects have not been practicable.

JCT and CBO have reviewed the provisions of the legislation and determined that they would impose no intergovernmental mandates as defined in the Unfunded Mandates Reform Act (UMRA).