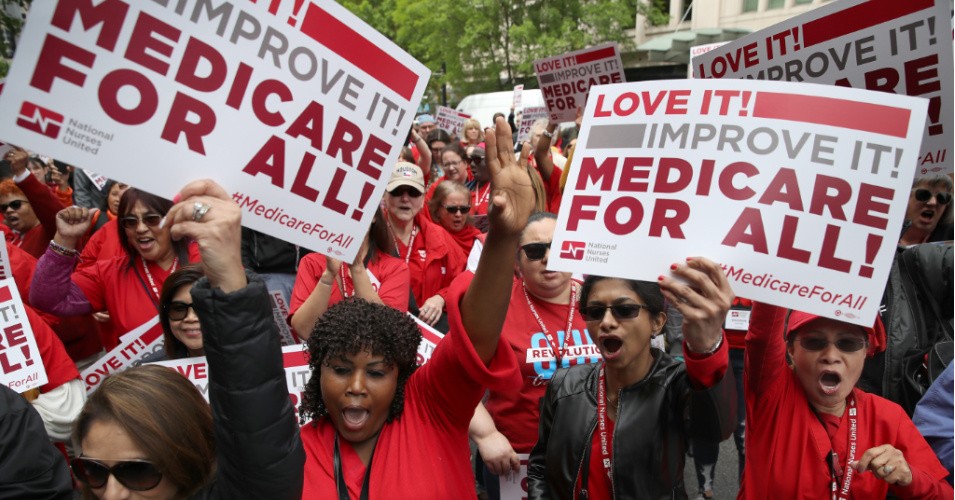 Above photo: The barriers to Medicare for All, wrote Matt Bruenig of the People’s Policy Project, “are not technical deficiencies or costs, but rather political opposition from Republicans and conservative Democrats who would rather spend more money to provide less health care.” Win McNamee/Getty Images.

The analysis shows that administrative costs under a single-payer healthcare system “will be lower than what even the most rabid Medicare for All supporters have traditionally claimed.”

The Congressional Budget Office on Thursday released a report examining the costs associated with universal healthcare proposals that are based on Medicare’s fee-for-service program and found that implementing a single-payer health insurance program in the United States would not only guarantee coverage for every person in the country but would also reduce overall healthcare spending nationwide.

In the words of researcher Matt Bruenig—founder and president of the progressive think tank People’s Policy Project who called the CBO’s working paper (pdf) on the topic “more exhaustive than any other recent study on the subject”—the new analysis shows that administrative costs under a single-payer healthcare system “will be lower than what even the most rabid Medicare for All supporters have traditionally claimed.”

According to Bruenig, “Modeling the cost of a single-payer program is relatively straightforward. You begin with the status quo healthcare system and then make educated guesses about the following questions:

In its analysis, the CBO looked at several distinct single-payer designs and determined that four such systems—fully implemented by 2030—would save anywhere from $42 billion to $743 billion that year alone.

“Never let a politician ask: ‘How will we pay for it?'” tweeted Democratic Socialists of America for Medicare for All.

Medicare for All could save as much as $0.7 trillion in 2030 while universal healthcare to all US residents, according to the Congressional Budget Office.https://t.co/ojIloECgrX pic.twitter.com/5kb4CkWrmL

Bruenig explained that the CBO option that most closely resembles current Medicare for All proposals is the one based on low payment rates and low cost sharing, which would generate $650 billion in savings in 2030.

If one were to add long-term support and services to that option, as many current Medicare for All proposals do, savings would fall to about $300 billion, he noted.

What Bruenig found most noteworthy is the CBO’s findings on administrative costs:

This rebuttal never really made any sense. Private Medicare Advantage plans have a similarly sick and elderly enrollment population, but manage to spend a whopping 13.7% of their revenue on administrative expenses. The CBO’s analysis, which starts with the current Medicare administrative costs and then determines how each element of those costs would go up or down in a single-payer system, seems to put this claim to bed once and for all.

Indeed, the CBO finds that the current Medicare administrative costs that are often touted by advocates are actually higher than the administrative costs you would expect in a single-payer system because a large share of those costs are tied up in tasks like eligibility determination and collection of Medicare Part B premiums that would no longer exist in a Medicare for All system.

What this means, Bruenig said, is that other studies estimating the effects of a single-payer system on administrative costs are “missing hundreds of billions of dollars of savings per year.”

“Overall,” he continued, “the study confirms what serious Medicare for All analysts have known for some time now: It is possible to provide high-quality public health insurance to every person in the country while also saving money overall on health spending.”

Bruenig added that “the barriers to the policy are not technical deficiencies or costs, but rather political opposition from Republicans and conservative Democrats who would rather spend more money to provide less healthcare.”