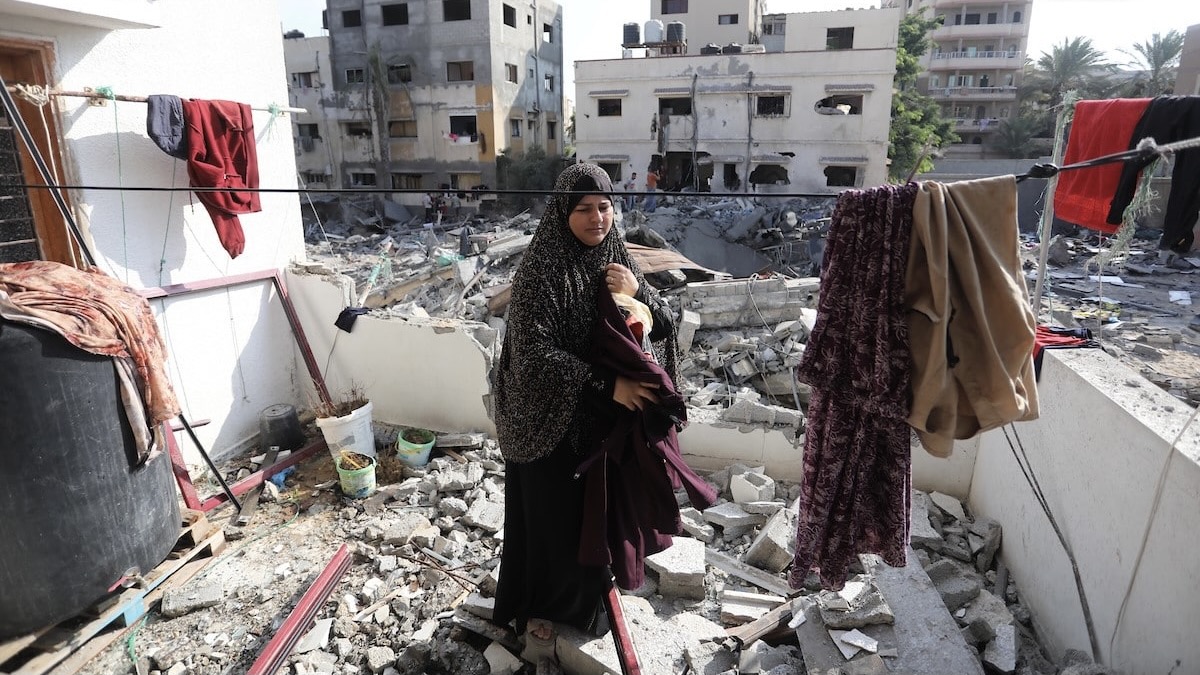 Ceasefire In Gaza After Three Days Of Israeli Bombings

Above Photo: Palestinans inspect the rubble of their homes destroyed by Israeli airstrikes during the recent aggression on Gaza. Quds News Network.

Israel’s latest aggression in the densely populated occupied Palestinian territory of Gaza constitutes ‘war crimes’ committed with the support of the US and other Western powers, assert Palestinians.

A ceasefire came into effect at around midnight on Sunday, August 8, ending the three-day-long Israeli bombing campaign inside the occupied Palestinian territory of Gaza. The latest round of Israeli aggression on the besieged territory, which began on Friday, killed at least 44 Palestinians and wounded more than 360 others.

Contrary to the Israeli claims that its airstrikes targeted leaders of Islamic Jihad, most of the Palestinians killed were civilians, including 15 children.

This was the second large-scale air raid carried out by the Israeli occupation in a little over a year inside the Gaza strip which has been placed under a comprehensive air, sea and land blockade since 2008. Similar raids were carried out in May last year, in which over 260 Palestinians were killed and over 2,000 injured. The raids also caused large-scale destruction of civilian infrastructure.

As per the terms of the truce, Islamic Jihad will seize its rocket attacks inside Israel in return of Israel stopping its air strikes inside Gaza. Al-Jazeera reported that Islamic Jihad leader Ziad al-Nakhala said that the truce was agreed to on the condition that Israel will take steps to end its blockade of Gaza and release two Islamic Jihad leaders currently held in Israeli jails.

Though the ceasefire has been effective so far, Israeli raids inside Gaza continued until the last moment before the truce came into force, targeting different locations inside one of the world’s most densely populated regions.

Israeli bombardment inside the Gaza strip began on Friday. Occupation authorities claimed that the strikes were “preemptive” in nature in order to prevent Islamic Jihad from carrying out its attacks. Israel called its operation “breaking dawn”.

Last week, Israeli forces arrested Sheikh Basan al-Shadi, a senior leader of the Islamic Jihad, from Jenin in the occupied West Bank. During the midnight raid, they also killed a Palestinian teenager Dirar al-Kafrayni and wounded Shadi’s wife. Since the Jenin raid on Monday, Israeli forces had been preparing for a “response” and took aggressive preemptive action such as reinforcing their blockade of the Gaza borders by closing all crossings into the territory.

Palestinian human rights group Al-Haq wrote in a statement on August 7 that “Israel’s aggressive assault and bombardment of the civilian population and infrastructure in the occupied Gaza Strip is being conducted disproportionally and excessively, relative to Israel’s anticipated military advantage, constituting a grave breach of international humanitarian law and may amount to war crimes and crimes against humanity.”

Palestinians’ Right To Self Defense

The latest round of Israeli aggression inside Gaza led to a fresh debate over the Israeli claims of “self defense” and the Palestinian right to resistance. Israel’s justification for initiating the bombing campaign was also widely criticized.

Husam Zomlot, Palestinian ambassador to the UK, condemned statements issued by the US and the UK wherein they declare that they stand by Israel’s right to self defense and Israel’s classification of Palestinian resistance movements as “terrorist”.

In an interview to BBC, Zomlot said, “under international law, the only people who have rights here are the occupied people. Therefore, this whole talk of Israel’s right to self defense-to defend itself as per the US statements, the UK statements, some western countries’ statement-is simply giving Israel–a green light to continue its murderous policies, to continue its war crimes.”

Ali Abuminah, editor of Electronic Intifada, called for a global debate on the Palestinians’ right to resistance in light of the international community’s failure to prevent the repeated crimes of occupation and attempts to justify Israeli aggression on the basis of rockets fired into Israel.

Most of the rockets fired by Islamic Jihad were intercepted by the Israeli missile defense system without causing any significant damage.