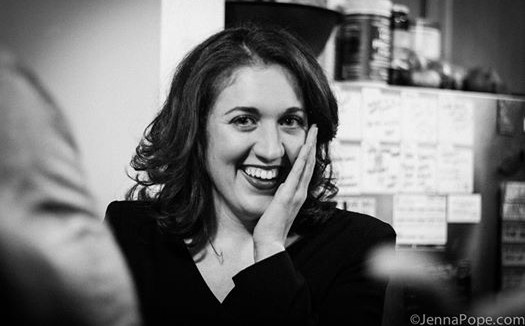 Above: Cecily McMillan night before the trial by Jenna Pope

The trial of Cecily McMillan – a prosecution that should not even be taking place – is in recess today and about half way through jury selection. (We have been covering Cecily’s prosecution regularly, previous stories can be seen here.) Below is a report on how the first few days of the process went. Justice for Cecily summarizes the situation:

“We are now up to 7 jurors, and we only need 9 more (the jury is 16 people – 12 jurors and 4 alternates). Cecily’s lawyers were able to once again bring up their desire to mention Officer Bovell’s history of violent conduct and gained permission to question him about it, which is really good for us. Just like anyone, there are good police, and there are bad police… and this one is pretty bad.”

The Guardian reported that finding jurors had been more difficult than the judge expected. Potential jurors often had ties to Wall Street and opposed the occupy movement.  The Guardian reports that the finance industry holds about one in nine jobs in New York City, as a result: “And as one after the other was rejected – either by McMillan’s attorneys, state prosecutors, or the judge – a jury selection process that the defense had hoped would be completed in one day reached the end of a second with only seven of the 12 jurors’ seats filled.”

The judge had been ruling that the defense would not be able to question Bovell about his history and even threatening  her attorney Marty Stolar with contempt of court if he asked about it. The defense continued to find ways to raise the issue and finally got a little leeway to bring Bovell’s history up. Bovell has been accused in four previous incidents of violence. Cecily’s lawyers will also bring up Bovell’s involvement in the Bronx ticket fixing scandal for which he was reprimanded. The Guardian reports that some potential jurors said they could not be impartial when they learned that Bovell had been “disciplined by bosses for having five parking and speeding tickets fixed as part of the so-called ‘Bronx ticketing scandal’ of 2011.'” Bovell’s history is critically important because the prosecution is essentially a one witness case. Nothing has been provided to the defense during the pre-trial phase indicating there is any witness to the initial conflict between Bovell and Cecily. Video tape shows police beating up Cecily after the initial incident, but there is only a poor quality video shot from a distance making the initial encounter unclear; both sides will argue that tape supports their case. Cecily claims that she was aggressively grabbed from behind by someone clenching her right breast and she instinctively reacted swinging her elbow around and hitting the person in the face. It turned out to be Officer Bovell. Cecily’s story is confirmed by photos of her bruises taken by her doctor. If the jury believes Cecily and not Bovell, there was no crime because there was no intent to assault the officer. We don’t have much information on the jurors selected so far, from twitter the following has been reported:

–          Jury selection is taking awhile and both sides are trying to meld the jury into something more “fair” [From Shay Horse who is tweeting from court] –          Update Marty Stolar is doing an amazing cross examination, asking questions to the Jurors waiting to be selected [From Casper OWS who is tweeting from court]. Cecily’s other attorney is Rebecca Heinegg was also questioning potential jurors. –          Cecily’s lawyer put on record that 2 of the jurors that were black were taken out by the prosecution. [From Global Revolution which has been reporting on the case via twitter] People at the trial report at least 5 African Americans have been rejected by the prosecutors. –          Interesting, a few jurors would not believe OWS activists testimony because they are OWS activists. [From Stan Williams who is tweeting from court] –          Defense is happy with what they have gotten so far [From Casper OWS] Cecily’s case has finally gotten some major mainstream media coverage. The New York Times published a fair story that described Cecily as “a labor organizer, was a nanny and a graduate student at the New School when she was arrested. She has said she went to Zuccotti Park that night to meet a friend, not to join the protest.” Regarding the incident the NY Times linked to an article about the aggressive police behavior on the night. They describe how Cecily says she was grabbed and explained how most occupy arrests have been dismissed or resolved with seriously reduced charges:

“The majority of the 2,644 protesters arrested never faced serious charges. The district attorney declined to prosecute or dismissed 679 of the cases. An additional 1,355 cases were placed in the category “adjourned contemplating dismissal,” which means those people will not have police records.”

The Times also reported that the prosecutor’s plea offer required Cecily to plead guilty to felony assault, but offered a probationary sentence. Cecily refused to plead guilty to something she did not do as she never had any intent to assault Bovell, but merely reacted to his aggressive sexual assault. The Times quotes Marty Stolar, Cecily’s lawyer saying “Some cases you just don’t prosecute, but they made their decision.” As can be seen on twitter #Justice4Cecily, there is a lot of support for Cecily in the community. The New York Times misunderstood this solidarity as Cecily’s supporters trying to create a ‘cause celebre,’ when all people are doing is showing that they stand with Cecily and want justice for her. The courtroom has had dozens of her supporters attending each hearing. The judge prohibited her supporters from wearing a cut out of a hand on their breast, signifying the sexual assault. If you are in New York, please attend the hearing to show support.  Regarding next steps, Justice for Cecily reports:

“She will be back in on Friday, April 11th to finish jury selection and begin opening arguments, so plan on coming then! It will be a very powerful statement if once the jury is chosen and go to sit in their section of the courtroom, the first thing they see is a courtroom filled with people there to say that Cecily is innocent.

“Thanks to all who have come out to support her in the past few days, it really means a lot.”