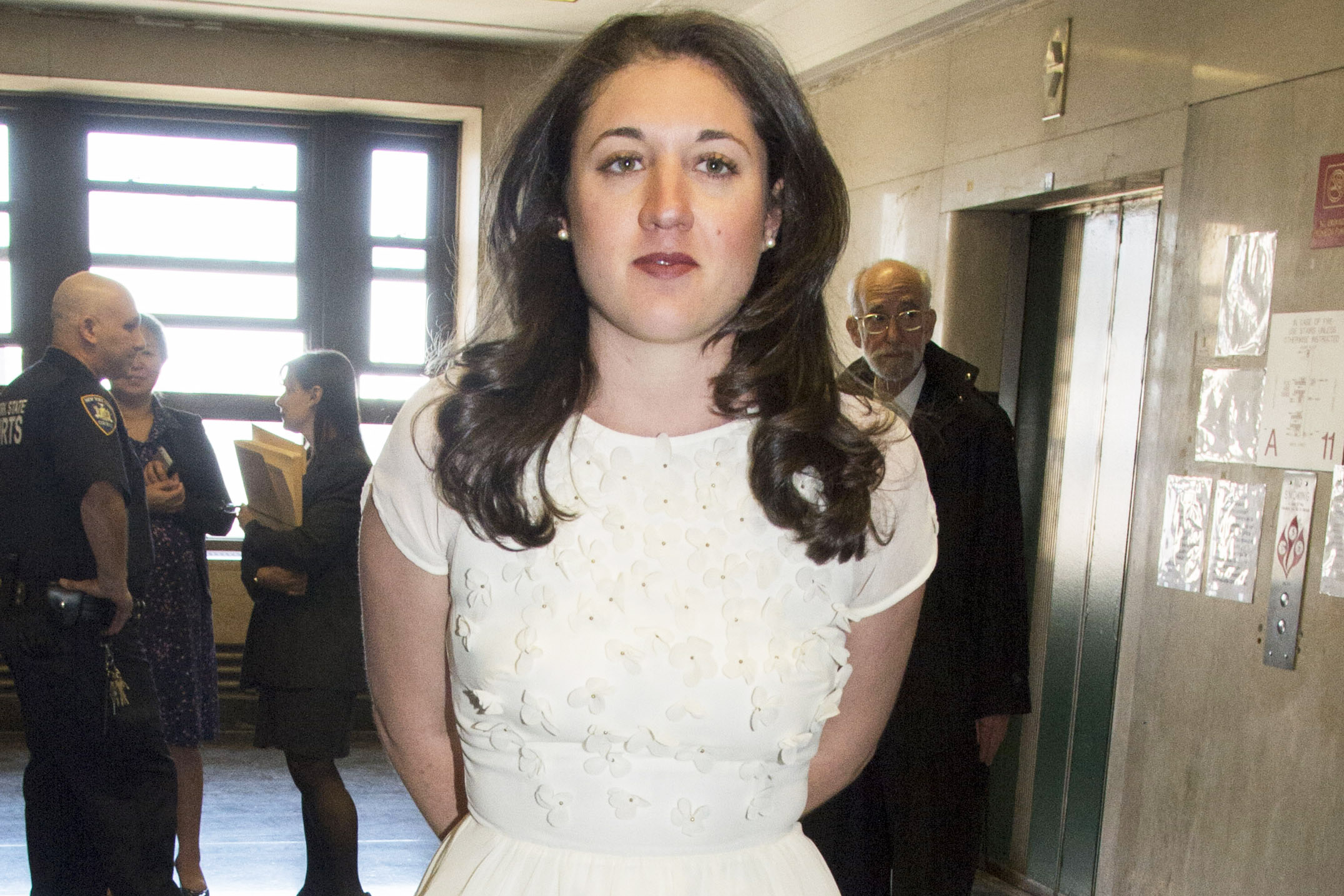 Above: Cecily McMillan in court in early May. Her attorney Marty Stolar is behind her. Photo: Steven Hirsch

The Judge may have intended to send a message to those who dissent, instead may have created a powerful messenger of dissent.

Cecily McMillan received a 90 day jail sentence plus five years’ probation.  This comes after an unjust trial managed by a prosecutor in robes, Judge Ronald Zweibel.  Cecily remained true to herself and true to the movement at her sentencing.

Judge Zweibel, who should be scorned wherever he goes in New York, prosecuted a trial that was obviously unfair to everyone who observed.  Vanity Fair published a summary of the reports on the evident injustices:

“Much has already been written about the case, and about presiding Judge Ronald Zweibel’s handling—and excluding—of evidence that would have almost undoubtedly weakened the prosecution’s version of events. There were the bruises on McMillan’s chest, which the prosecution argued were self-inflicted. There exists audio of McMillan’s fellow protesters imploring the N.Y.P.D. to call an ambulance for McMillan, while she was seizing on the ground as police officers casually looked on, but video played in court was unaccompanied by the sounds of that day in March 2012. There was, of course, plenty of video footage that didn’t make it into Judge Zweibel’s courtroom, and, thus, to the jury. Bovell’s history of alleged violence and misconduct was also excluded from the trial. (A fuller accounting of Zweibel’s ‘editing’ of the case is available from The Nation’s Kathryn Funkhouser.)”

During the sentencing Judge Zweibel hid behind a phalanx of court officers who surrounded the courtroom knowing that what he was about to do would spark outrage among many.

Before issuing his sentence, Cecily spoke, refusing to acknowledge the guilt found by the jury in Zweibel’s Kangaroo Court. She described how she is on a “path where dignity is derived from the law of love” and that:

“This being the law that I live by, I can say with certainty that I am innocent of the crime I have been convicted of. And as I stand before you today, I cannot confess to a crime I did not commit; I cannot do away with my dignity in hopes that you will return me my freedom.”

She concluded her statement apologizing for any harm done to Office Bovell saying:

“. . .the same law of love requires me to acknowledge the unintentional harm I caused another – for this accident, I am truly sorry. And in this spirit, your honor, I ask you to halt the violence there. Consider my words as I ask you to not perpetuate one injury with yet another.”

Her full sentencing statement is below.

The prosecutor in a robe was not moved by Cecily’s courage and dignity, saying “A civilized society must not allow an assault to be permitted under the guise of civil disobedience. The jury rejected the defendant’s version of events.” All in the courtroom knew the jury’s verdict was in doubt because the trial was a manipulation of the jury, not a true opportunity to find the facts that occurred on the night Cecily was arrested.

While the 90 day sentence, minus the time she has already served, is much less than the potential sentence of seven years, it is an unjust sentence after an unjust trial which is one example of many of injustice in America.

Her attorney, Marty Stolar, said after the sentencing that the guilty verdict has already been appealed. McMillan’s supporters have raised about $14,000 for her defense online.

Cecily McMillan is growing in stature, strength and power from this experience already. During her trial she generated huge levels of support and took it all with humility. As Vanity Fair reports her support “including a majority of the jurors who convicted her, five City Council members, over 170,000 petition-signees, and scores of social-media users—and those concerned over the N.Y.P.D.’s not-brilliant record when it comes to use of force, the verdict and sentence represent scary realities about the city’s dismal view of public assembly, nonviolent protest, and police violence.”

Even though Cecily knew that she was treated unfairly, telling Chris Hedges: “I watched the trial. I watched the judge. This was never about justice;” she has kept her dignity in trying times and becoming someone who can express reality in ways that will be persuasive and powerful to all who hear her because it will come from her personal experience. Judge Zweibel may have intended to send a message to those who dissent, but he may have created a powerful messenger of dissent.

Chris Hedges visited Cecily the day before her sentencing and reported what Cecily has already seen behind the prison walls:

“It’s all out in the open here. The cruelty of power can’t hide like it does on the outside. You get America, everything America has become, especially for poor people of color in prison. My lawyers think I will get two years. But two years is nothing compared to what these women, who never went to trial, never had the possibility of a trial with adequate legal representation, face. There are women in my dorm who, because they have such a poor command of English, do not even understand their charges. I spent a lot of time trying to explain the charges to them.”

So often in our history, those who have gone through criminal prosecution and imprisonment have come out as truth-tellers that can explain the coarse reality of what the nation really is to others. Cecily is on that path and she is someone who can achieve a level of greatness that would not have been possible without the injustice of Judge Zweibel.

From jail Cecily expressed what her task is, as well as what our is our collective task.  How do we overcome the economic and social injustice, racism and the violence of the security state?

“We can talk about movement theory all we want. We can read Michel Foucault or Pierre Bourdieu, but at a certain point it becomes a game. You have to get out and live it. You have to actually build a movement. And if we don’t get to work to build a movement now there will be no one studying movement theory in a decade because there will be no movements. I can do this in prison. I can do this out of prison. It is all one struggle.”

Your honor, I stand before you exhausted. I have spent 35 of the 42 months that I have been in New York City in this room trying to convince the court of my innocence. I have lost friends and family, school and work, and, most recently, my freedom. I have been exhausted of nearly everything that makes me, me, except, that is, my dignity.

As a young girl my mother told me, “Cecy, everything you see, your home, your loved

ones, even your life, can be taken from you at will. But no one can strip you of your dignity without your consent.” I don’t think I knew what dignity was then, but I did understand that it was deliberate, something you had to define for yourself.

And though I am still young, and still searching for answers, I have started down a path where dignity is derived from the law of love, and though it has been said that this trial is personal and not political, I maintain that the personal cannot be divorced from the political.Whereas nonviolent civil disobedience is the manifestation of my ideology, it is rooted in a love ethic that is central to my identity.

The law of love holds that we, all of human society, live one common life, our existence beats with one common pulse – that as we listen to one another, learn from one another, love one another – we draw closer to one another and towards our collective happiness. Therefore -whether in resistance or in retribution, whether personal or political, violence is not permitted.

This being the law that I live by, I can say with certainty that I am innocent of the crime I have been convicted of. And as I stand before you today, I cannot confess to a crime I did not commit; I cannot do away with my dignity in hopes that you will return me my freedom.

However, the same law of love requires me to acknowledge the unintentional harm I caused another – for this accident, I am truly sorry. And in this spirit, your honor, I ask you to halt the violence there. Consider my words as I ask you to not perpetuate one injury with yet another.

Kevin Zeese is an organizer with Popular Resistance and attorney general for the Green Shadow Cabinet.