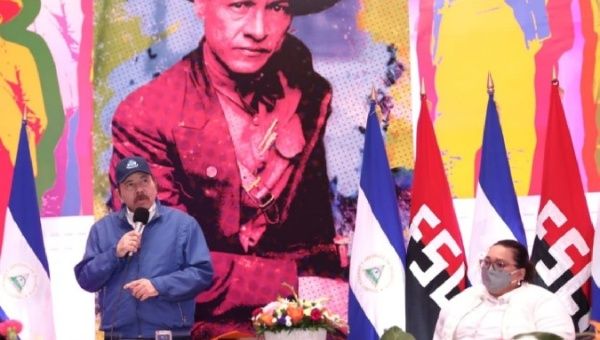 President Ortega: CELAC Is A Meeting Point For Latin Americans

Referring To The Unwillingness Of The U.S. To Invite Nicaragua To The 2022 Summit Of The Americas, The Sandinista Leader Pointed Out That Such Event “Does Not Interest Us.”

On Wednesday, Nicaragua’s President Daniel Ortega called for strengthening the Community of Latin American and Caribbean States (CELAC) as the most appropriate space for the meeting of the peoples and their governments of the region.

“Our starting point is CELAC. Now we need to strengthen it so that this community has more sovereignty and autonomy,” he said during the celebrations for the 127th anniversary of the birth of Augusto Cesar Sandino, the hero of the Nicaraguan struggle against U.S. imperialism.

“CELAC was born with the strength and energy of the revolutionary processes that were multiplying in Latin America and the Caribbean,” Ortega recalled, stressing that its promoters had the courage not to include the United States in that community.

This does not mean that CELAC does not develop relations with nations outside the region or other integration processes in the world. Its international relations, however, are based on reciprocal respect, Ortega explained and recalled that CELAC has extensive exchanges with countries such as Russia, China, and India.

Referring to the unwillingness of the U.S. to invite Cuba, Nicaragua, and Venezuela to the 2022 Summit of the Americas, the Sandinista leader pointed out that “we have to make ourselves respected,” adding that “the summit does not interest us.”

However, the Nicaraguan president thanked the concern and courage of several Latin American governments that rejected the exclusionary attitude adopted by Washington.

“The spectacle the Yankee rulers are giving with this so-called ‘Summit of the Americas’ is a shame,” Ortega pointed out and suggested that CELAC invite the U.S. to a continental meeting, in which the Latin Americans do not exclude anyone.