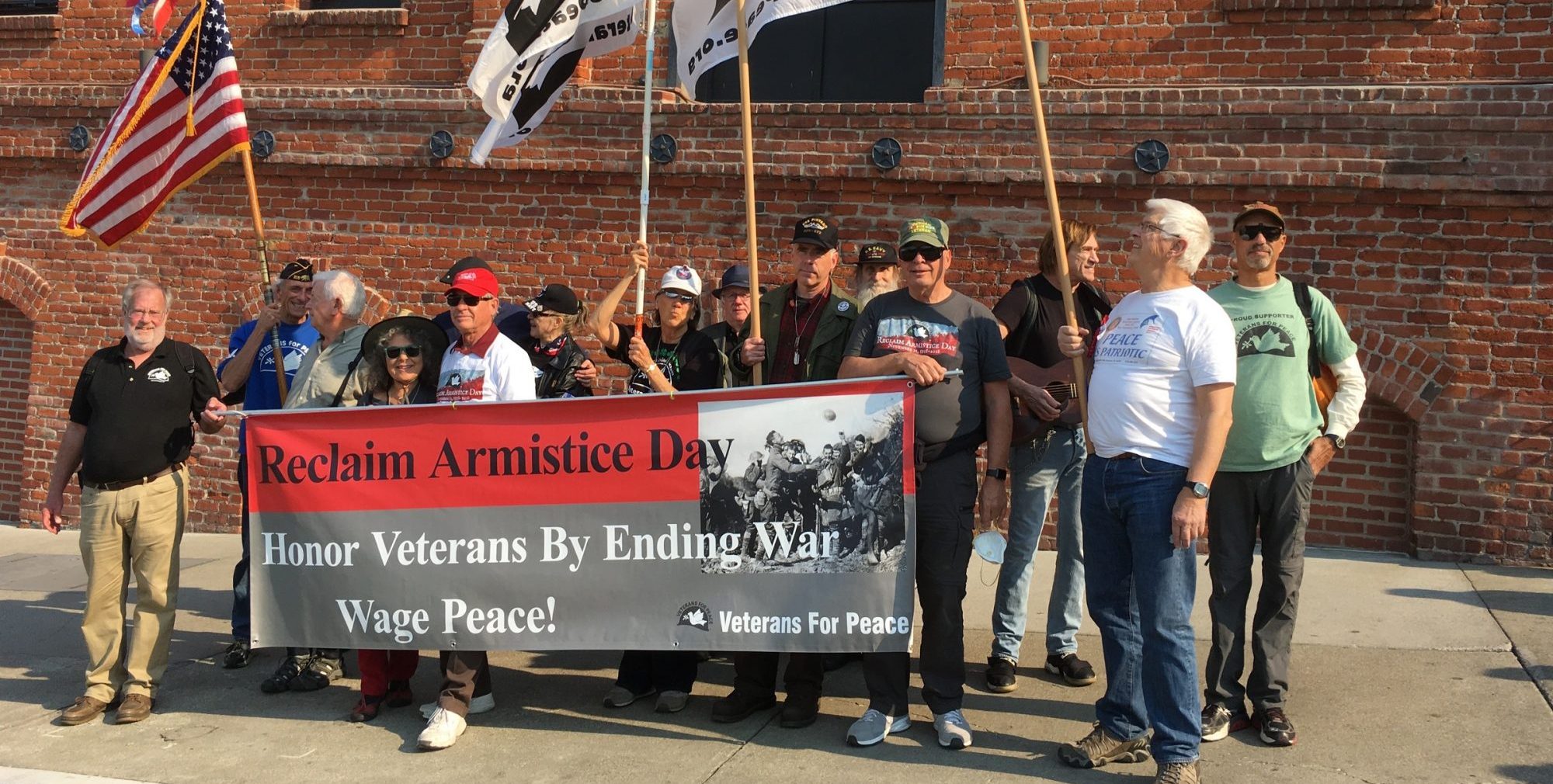 Above photo: Veterans for Peace.

November 11 is Armistice Day, marking the 1918 armistice that ended the First World War, on the “eleventh hour of the eleventh day of the eleventh month.” Horrified by the industrial slaughter of millions of soldiers and civilians, the people of the U.S. and the world initiated campaigns to outlaw war once and for all.  In 1928 the U.S. Secretary of State and the French Foreign Minister were awarded the Nobel Peace Prize for co-sponsoring the Kellogg-Briand Pact, which declared war-making illegal and called upon nations to settle their differences by peaceful means. The United Nations Charter, signed by many nations in 1945 after the end of World War II, included similar language, “to save succeeding generations from the scourge of war, which twice in our lifetime has brought untold sorrow to mankind…”

Tragically, however, the last century has been marked by war after war, and growing militarism. Those of us in the U.S. who are concerned about global militarism need look no further than at our own military industrial complex, as President Dwight Eisenhower warned.

The U.S. maintains no fewer than 800 military bases around the globe, in a full-court press to “defend our national security interests.”  These are not the interests of everyday working people, who must pay the tab for the ever growing military budget, and whose sons and daughters are forced to fight wars in faraway lands. No. These are the interests of the now infamous One Percent, who are grotesquely enriched by the exploitation of other nations’ natural resources, labor and markets, as well as by their investments in the misnamed “defense industry.”

As Martin Luther King bravely declared in his Beyond Vietnam speech, “…I knew that I could never again raise my voice against the violence of the oppressed in the ghettos without having first spoken clearly to the greatest purveyor of violence in the world today: my own government.”

Operating alongside the overgrown U.S. military are less visible forces.  U.S. intelligence agencies like the CIA have morphed into covert armies that work to undermine and topple governments that are out of favor with the U.S. ruling class.  Economic warfare – aka “sanctions” – are employed to make economies “scream,” bringing death and misery to thousands.

To make matters worse, the Obama/Biden administration launched a One Trillion Dollar, 30-year program to “modernize” the “nuclear triad” – air, land and sea-based nuclear weapons systems.  The Trump administration has systematically withdrawn from crucial nuclear disarmament treaties, leading the Bulletin of Atomic Scientists to move their Doomsday Clock to 100 seconds from midnight.  The danger of nuclear war is greater than ever – all the more so because of the U.S./NATO encirclement of Russia and the huge U.S. military buildup in the Pacific, threatening a major war with China.

This is all very alarming, as it should be.  But there is good news too.  On October 24, 2020, Honduras became the 50th nation to ratify the UN Treaty on the Prohibition of Nuclear Weapons. In what leading campaigners are describing as “a new chapter for nuclear disarmament,” the Treaty will now come into force on January 22, two days after the inauguration of the next U.S. president. The treaty declares that the countries ratifying it must “never under any circumstance develop, test, produce, manufacture or otherwise acquire, possess or stockpile nuclear weapons or other nuclear explosive devices.”

The International Campaign to Abolish Nuclear Weapons (ICAN) – an umbrella organization and campaign for dozens of groups across the world – said that the coming into force, was “just the beginning. Once the treaty is in force, all States’ parties will need to implement all of their positive obligations under the treaty and abide by its prohibitions.

Neither the U.S. nor any of the nine nuclear-armed nations are signatories to the Treaty. The Trump administration, apparently fearful of an international consensus to abolish nuclear weapons, is actually pressuring nations to withdraw their signatures.

“States that haven’t joined the treaty will feel its power too,” according to ICAN. “We can expect companies to stop producing nuclear weapons and financial institutions to stop investing in nuclear weapon-producing companies.”

There could perhaps be no better news to share on this Armistice Day.  Surely, the abolition of nuclear weapons will go hand-in-hand with the eventual abolition of war. And the abolition of war will go hand-in-hand with ending the domination of weaker nations by predator nations.  Those of us in who live in the “belly of the beast” have a tremendous responsibility – and great opportunities as well – to work with the peoples of the world to bring about a peaceful, sustainable world.

Because November 11 is also celebrated as Veterans Day, it is appropriate that veterans have taken the lead in reclaiming Armistice Day.  Veterans For Peace has issued a strong statement, and many VFP chapters are organizing Armistice Day events, mostly online this year.

“Veterans For Peace is calling on everyone to stand up for peace this Armistice Day. More than ever, the world faces a critical moment. Tensions are heightened around the world and the U.S. is engaged militarily in multiple countries, without an end in sight.  Here at home we have seen the increasing militarization of our police forces and brutal crackdowns on dissent and people’s uprisings against state power. We must press our government to end reckless military interventions that endanger the entire world. We must build a culture of peace.”

On Armistice Day we celebrate the overwhelming desire of people around the globe for a nuclear-free world and a peaceful, sustainable future.  We make a solemn commitment to work harder than ever to bring an end to nuclear weapons and war, before they are allowed to bring an end to us.

War, what is it good for?  Absolutely nothing!  Say it again!

Gerry Condon is a Vietnam-era veteran and war resister, and the recent past president of Veterans For Peace.