This weekend, celebration of Indigenous People’s Day will replace the federal holiday, Columbus Day, in at least eight states and over 130 cities in 34 states. Along with the toppling of Columbus statues and the removal of a racial slur as a name for a major football team, this signals a shifting awareness in the United States of our colonial roots and ongoing Indigenous genocide and a desire for change.

If, like me, you are not indigenous, there are ways each of us can educate ourselves and those around us about the land we live on, to whom it belonged and how it was taken away from them. We can learn about the ways our actions may silence indigenous voices or otherwise contribute to their oppression. We can support indigenous people by buying from their businesses, contributing to their organizations or showing up to assist with their struggles. Taylor Payer (Anishinaabe) wrote this guide for ways to celebrate Indigenous People on this day and every day.

Roxanne Dunbar-Ortiz, author of “An Indigenous Peoples’ History of the United States,” writes, “By and large the history of relations between Indigenous and settler is fraught with conflict, defined by a struggle for land, which is inevitably a struggle for power and control. Five hundred years later, Native peoples are still fighting to protect their lands and their rights to exist as distinct political communities and individuals.” Here are a few of the current efforts by Indigenous Peoples to protect their sovereignty, right to exist and lands. 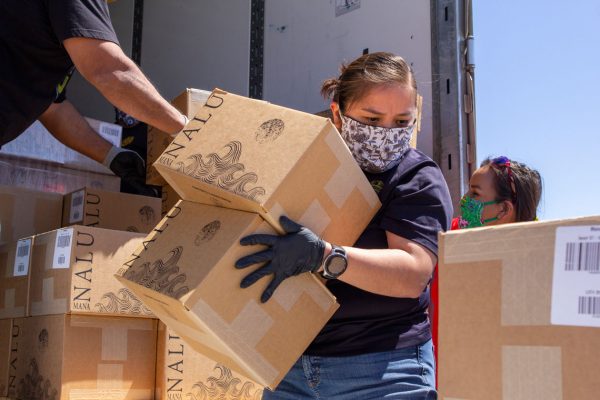 Indigenous communities in the United States are more likely than other communities to lack basics such as running water, electricity, access to the internet and other necessities that support public health measures, the ability to get information and to stay at home.

The Navajo Nation, which was hit very hard early in the pandemic, received federal funds after a long delay, but this money has to be spent by the end of the year or they lose it. While much of it was used to provide protective equipment, food and health care, leaders argue they also need to build infrastructure to support health now and in the long term, but those projects take time. There is a bill in Congress to extend the deadline for when the funds must be used, but it is not likely to pass in time.

In the Great Sioux Nation, tribes such as the Cheyenne River Sioux and the Oglala Sioux created checkpoints at the entrances to their reservations to screen people for COVID-19. This is a public health measure used by nations around the world to control the spread of the virus. In South Dakota, where cases are rising, Governor Kristi Noem is opposed to the checkpoints and is threatening to withdraw aid if they aren’t dismantled. The tribes refuse to take them down and have filed a complaint with the federal government. 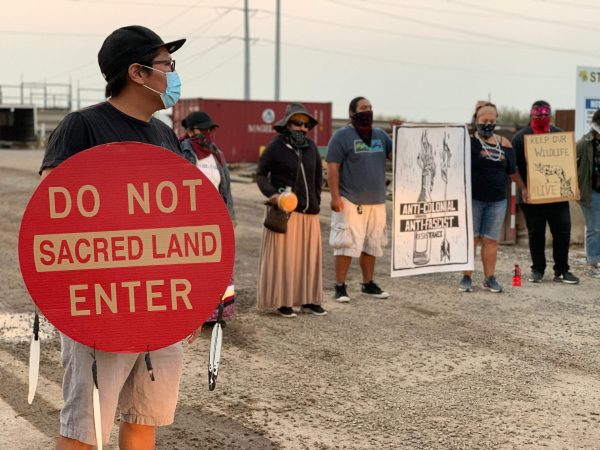 There is a long history in the United States of failure to understand Native American culture and respect sacred sites. Think of an indigenous sacred site as a church, mosque or temple. Now imagine what the reaction would be if a government or corporation tried to destroy those structures or refuse access to them. Religious freedom is protected under the First Amendment in the United States, except for Indigenous Peoples.

Sacred sites have been destroyed, such as the San Francisco Peaks where a ski resort, Snowbowl, was built. In February, the Trump administration granted permission for mining and logging on Bears Ears land. The Black Hills have long been a target for development. Cal State Long Beach is facing consequences for dumping construction debris, including asphalt, metal and concrete, on a sacred site that is registered as a national  historic place.

At present, a conflict is taking place along the US-Mexico border where construction of the wall is violating indigenous sovereignty and rights. A group of tribes in the Kumeyaay Nation are suing the federal government for blocking their access to “sacred sites, trails, plants and medicines, as well as a number of historic landmarks.” And activists in Arizona from the Tohono O’odham Nation are waging a direct action campaign to physically block construction of the wall there that will stop them from having access to a sacred site and source of water, the Quitobaquito Springs. 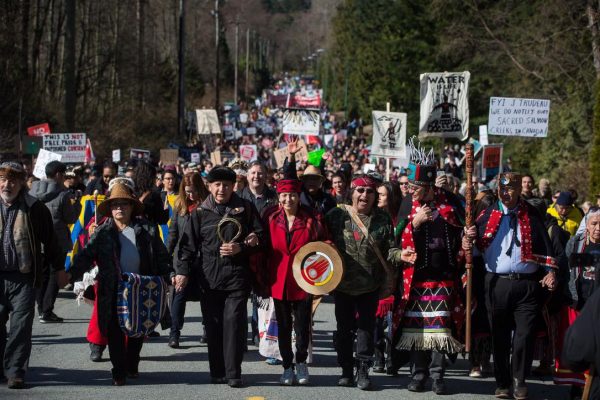 From the Toronto Star.

The struggle to stop the Dakota Access Pipeline is perhaps one of the most well-known efforts to stop fossil fuel infrastructure from invading and degrading indigenous land, and that struggle continues, but there are many similar struggles going on. Resistance is rising in Greater Chaco against fracking, which began there in 2010.

Two major conflicts are in Western Canada, the Trans Mountain Pipeline on Secwepemc and Ktunaxa land and the Coastal Gaslink Pipeline on Wet’suwet’en Territory. The Trans Mountain Pipeline project was bought by the Canadian government in 2018 when Kinder Morgan was about to give up on it. Construction has begun and people are trying to block it through tree sits and targeting corporations that insure the project. Similarly, the Wet’suwet’en have used blockades, and been treated violently by militarized police, and are now asking the Supreme Court to halt the project because of the violence to their communities associated with the pipeline workers’ “man camps.” 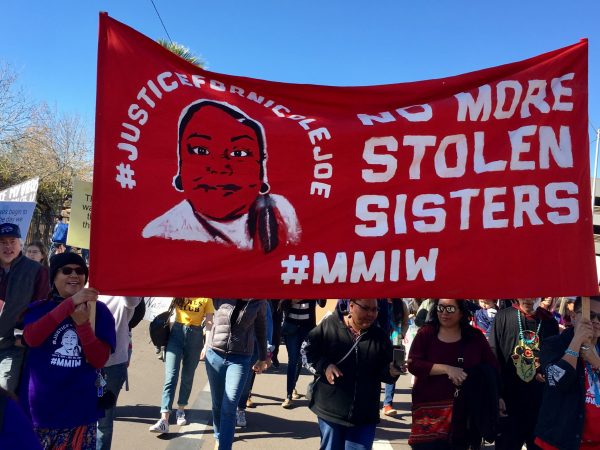 The kidnapping, sexual assault and murder of indigenous women is at a crisis level. Clearing the FOG spoke with Annita Luchesi (Cheyenne) about it last year. She has been working to document the cases through the MMIW Database, win policy changes to solve the cases and prevent them from occurring through the Sovereign Bodies Institute. Red dresses are used in protests to symbolize the women and girls who have disappeared or have been killed. Not only are “man camps” that exist around fossil fuel projects directly correlated with increased violence towards women, but law enforcement, who are supposed to investigate the violence, are perpetrators of it too. 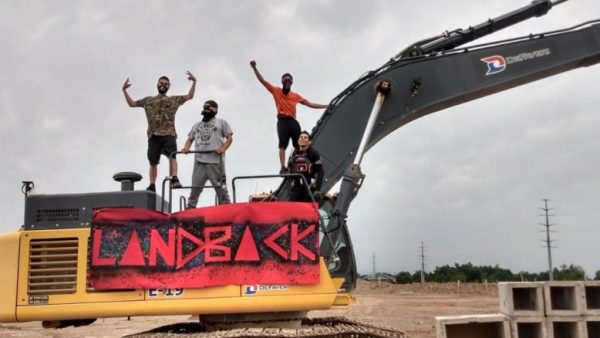 Land defenders from the Six Nations in Canada are waging a struggle to prevent a development from being built on their land. They established a camp on the land, which is disputed territory, in July and named it 1492 Land Back Lane. Police arrested them last month and now the land defenders are receiving more support and solidarity through rallies and marches.

In this interview, two Haudenosaunee land defenders explain how settlers are encroaching upon their land with development and restricting their land base as their population grows. They describe how they need land for their sources of food, such as plants and game, and how development destroys that. It is easy to see the parallels with the situation faced by colonized people all over the world, and particularly Palestinians who are being constrained to smaller spaces and attacked right now for harvesting their olives.

This is the “American Way of War,” as Roxanne Dunbar-Ortiz describes it. It has its roots in the tactics used by settlers when they first came to the Americas of destroying land, housing and crops to weaken Native Americans and drive them off their land. It continues today in places like Yemen and Syria where there are food crises and with the use of economic coercive measures against countries like Cuba, Venezuela, Zimbabwe and Iran that prevent them from buying food and medicine. It’s time for the people of the United States to demand an end to these destructive practices. 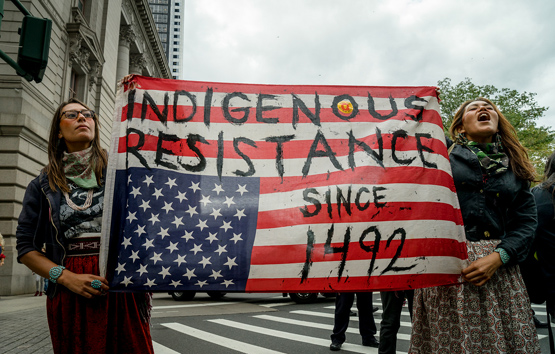 Climate Justice Alliance developed a set of  proposals for an indigenous-led just transition to a green economy. They write:

“A just nation-to-nation relationship means breaking the cycle of asking Indigenous nations to choose between a colonial imposed model of an extractive economy or preservation of their Indigenous sovereignty, including protection of their traditional lands, waters and air, and the right to practice their spirituality and cultural lifeways.”

The proposals include respecting the sovereignty of indigenous nations, requiring their consent for policies and projects, repairing the damage done through broken agreements and investment in indigenous communities. These principles can be applied more broadly than just  addressing the climate crisis to become a template for all interactions with indigenous nations.

There is a path forward to a future where the rights of indigenous peoples are respected and protected. As we participate in the current movement to end systemic anti-black racism in the United States, let’s include the ways systemic racism and colonization impact Native Americans. Let’s show our solidarity with indigenous people through our actions to support their resistance.