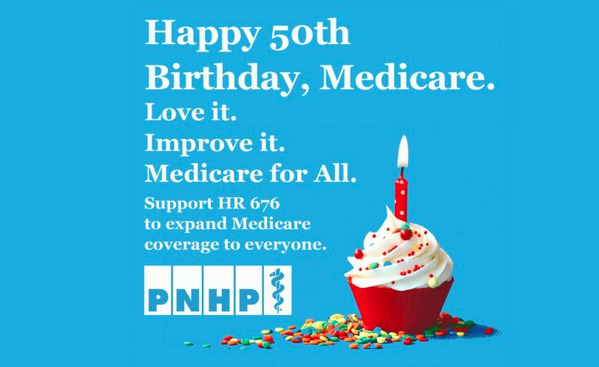 Celebrate Medicare’s 50th Birthday By Expanding It To All

Fifty years ago, the rapid rollout of Medicare flowed from the simplicity of its basic principle: virtually everyone 65 and older was automatically eligible for government health insurance. Now all we have to do is make it better and provide it to everyone. (Image: PNHP)

The nation has a lot to celebrate when Medicare turns 50 on July 30.

Medicare has brought care and dignity to millions of seniors, relieving their suffering and extending their lives.

Before President Lyndon Johnson signed Medicare into law in Independence, Missouri, in 1965, only about half of those over 65 had health insurance. In the 50 years since then, life expectancy has risen by more than nine years to a little over 79 years.

Medicare ended segregation in our country’s hospitals when federal reimbursements for patient care were made contingent on ending discrimination. Within a few months the walls tumbled in the face of sound public policy and financing based on social justice.

Today, Medicare covers about 17 percent of our population, over 55 million people, including those other than the elderly whom the private insurance industry has abandoned – the permanently disabled and those on dialysis from kidney failure.

Medicare has important lessons for our entire health care system. It was implemented within 10 months of enactment with no computerized records – only a system of notecards.

The program’s rapid rollout flowed from the simplicity of its basic principle: virtually everyone 65 and older was automatically eligible for government health insurance. In contrast, the complicated, problem-prone, private-insurance-based Affordable Care Act is unfolding over a period of 10 years and will still leave 30 million people without coverage – and millions more who are nominally covered but cannot afford care.

Patients in traditional Medicare go to the doctors and hospitals of their choice. There are no limited networks to get in the way of care.

Traditional Medicare spends about 2 percent (according to the 2014 Medicare trustees’ report) on administration and overhead. Medicare is efficient and frugal compared to private insurance, whose overhead and profits are 12 to 14 percent or more (individual market overhead typically amounts to 20 percent to 30 percent).

On July 30, in Washington, D.C., longtime single-payer advocates Sen. Bernie Sanders, Rep. John Conyers (chief sponsor of HR 676, the Expanded and Improved Medicare for All Act), and others will speak at a rally for Medicare’s 50th anniversary in Upper Senate Park, starting at 9:30 a.m.

Later that day, starting at 1 p.m., Rep. Conyers will host a Medicare 50th Celebration Panel in Room 2237 of the Rayburn House Office Building.

Across the country, people in more than 70 cities will join in rallies and celebrations.

The theme of all the events is to Protect, Improve, and Expand Medicare – PIE:

I believe our nation has a compassionate heart and a deep national desire for universal care. What better time to make these yearnings manifest – and to demand that they be realized – than Medicare’s golden anniversary? Tell your lawmakers: we want an improved Medicare for All.