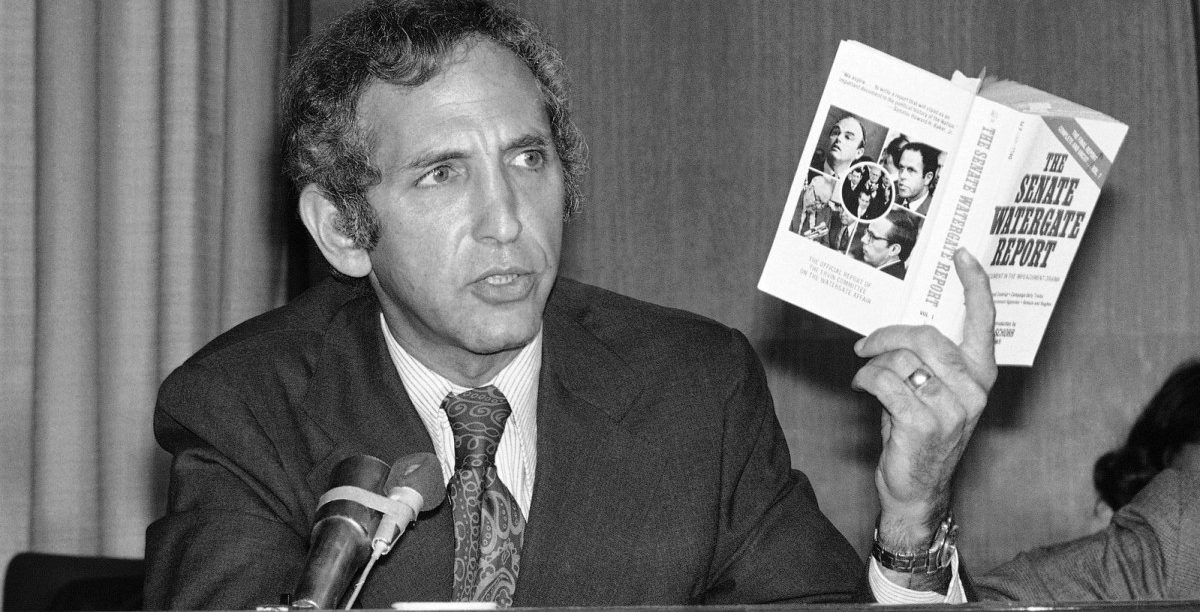 Celebrating Fifty Years Of Courage In An Era Of Apathy

‘Where Have You Gone, Daniel Ellsberg?’

Nowhere. Now 90, he’s been here all along, still calling out our government’s bullshit.

He hasn’t gone anywhere, actually. He’s been here all along – poking small holes of decency in sick system, for five-plus decades. At 90, Dan Ellsberg is with us still, and still calling bullshit on a government that couldn’t act right if it tried, to a citizenry that couldn’t care less. Most of it, anyway; reminding me, at least – here at the 50th anniversary of the Pentagon Papers’ publication, and just a month after Dan just dared the Justice Department to indict him for dropping yet another classified truth bomb about US nuclear lunacy – of the indefatigable Tom Joad’s climactic speech from The Grapes of Wrath:

If that seems a bit much, a touch hyperbolic, ask yourself: why is it that there are so few Dan Ellsbergs, and so many war-profiting spin-masters, walking around not just Washington, but Wisconsin, Wyoming, and Wichita, Kansas?

One wonders, on such commemorative occasions – amidst two decades-worth of ongoing wars now so (deliberately) abstract as to be almost invisible – what’s appropriate (or left) to say about the whole thing.

My colleague, onetime muse, and – dare I say – friend, Andrew Bacevich was in Vietnam when Ellsberg detonated his tortured truth bomb on a then (relatively) more engaged public. That said, Bacevich – in standard self-deprecating style – admitted in a recent New York Times column that as newly-minted army lieutenant fresh out of West Point, he hadn’t given the Pentagon Papers story much thought. No doubt he had more pressing matters to mull over: like dodging bombs and bullets, whilst maintaining some semblance of “good order and discipline” in one small unit of a big army – which was all-but coming apart there at the tail end of a long war that ought never been fought.

Sometimes talking to Andrew is jarring in it’s own right. He’s four years older than my father, hailing from a whole other spatial and temporal world. Knowing the words to obscure Lovin’ Spoonful songs made me – like comedian John Mulaney – an “off-putting, strange child.” It made Andrew a normal teenager. Normally, we’d otherwise have little in common – probably have no occasion to know, or know of, each other. Yet as fate would have it, we share alma maters, combat stints in worthless wars, and personal paths to eventual doubt and dissent. And just as Andrew once hardly heard the whistles blown about his hopeless war, I’d barely bothered to catch the Cassandra-calls about my own adventures in Iraq and Afghanistan. Until it was too late.

I think about Bacevich – who I began reading during my senior year at the academy – sometimes, when I worry if my own military past might poison the well of my two sons’ future career choices, or on sleepless nights spent wondering whether fighting the antiwar fight is a futile endeavor. After all, that first Bacevich book I read carried the fitting subtitle: “How Americans Are Seduced By War.” Well, I sure was; seduced, that is, way back in 2005, and probably long before – on account of captivating tales told by Greatest Generation grandfathers, and a few too many John Waynes flicks watched once our family finally clawed it’s way to cable-TV (TBS military marathons!)middle class-status.

Frankly, I’m underselling my own level of intellectual awareness – which makes matters all the worse. As kind of a classic “double-kid,” I secretly read my tail off by night, whilst pretending popularity by day. More informed than most would be an understatement. As such, I knew all about Ellsberg and the Pentagon Papers long before being accepted to West Point – probably prior to my first real kiss. Thing is, it never stuck – the crucial conclusions, the real ramifications, I mean. I doubt they ever had a chance. Militarism, the fetishization of all things martial and violent, is supremely subtle in our society. It seeps in sooner than we think, often before we’re conscious of the concept.

If you’ll forgive the brief foray into pessimism and minor-masochism – the latter, the birthright of my mother’s vaguely Irish Catholic people – this discomfiting visceral and experiential knowledge (and how common it seems for a certain sort of citizen), when combined with America’s present post-draft, obligations-free military-service culture, is enough to engender a defeatism of sorts. Toss in a (confusingly-youthful)-curmudgeon’s take on the navel-gazing narcissistic nature of digital tech and social media, and the gloom gathers.

Still, there stands Daniel Ellsberg – and others like him; living and breathing correctives to any temptation towards apathy. Yet, I’ve sensed the fear of that collective passivity in even some of Ellsberg’s recent remarks – which should sound activist alarm bells from Miami to Mendocino.

In an interview profile in The Nation this past March, Ellsberg admitted he worries that despite some 20-years of almost absurdly obvious failure in the Afghanistan War – during which America repeated many of the mistakes and atrocities of the Vietnam debacle – and laments the comparative lack of widespread public opposition to Washington’s current conflicts. Consider his disturbing and concise summary lament on the post-9/11 era:

“If the Pentagon Papers of Afghanistan come out, you could change place names and officials’ names, it wouldn’t make any difference. Same story. And we were lied into a war with Iraq. And Trump could have gotten us into a war with Iran. If you look at Obama in Libya, he wasn’t even willing to use the War Powers Act to inform Congress. It was just war from the air.

We’re seeing near-zero curiosity in the American public as to how many Afghans have been killed in this war in the last 20 years. Not an estimate, no hearings. How about Iraq? There are estimates about 10 to 20 times that of the government estimates. The American people don’t care.”

Incidentally, “the Pentagon Papers of Afghanistan” did come out – in the Washington Post in fact, and only 15 months earlier. Heck, that was even the title of my analysis column solicited by The Nation – “We Have Just Been Handed the Pentagon Papers of Our Generation.” But Ellsberg’s basically right – the story seemed big, but ultimately lacked real surprise or staying power. This bombshell proved a dud – a minor embarrassment for a military and government that bare blinks at the negligible annoyance. Certainly the revelation of the should-have-been-obvious – “We didn’t have the foggiest notion of what we were undertaking,” confessed Afghan War “Czar” Lieutenant General Douglas Lute – didn’t galvanize any major public outcry or produce a policy pivot. In fact, a dozen American service-members – and who knows how many locals – have died in the admitted Afghan War hopelessness in the subsequent 19 months.

Hope is hardly lost, and we should hardly quit the good-fight even if it were – but it does make one feel merely an anti-militarism mosquito nibbling a military-industrial complex monstrosity.

Which also raises a rather serious question: when the next Ellsberg releases the next version of The Pentagon Papers – will anyone even notice?