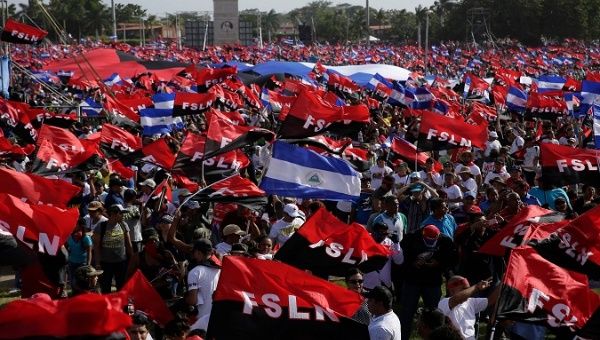 Genuine peoples holidays are hard to come by in the U.S.

But in Nicaragua the ongoing revolutionary process is widely celebrated.

Holidays in the United States celebrate awful events such as the settler colonists declaring independence from Britain so that they might take indigenous lands and protect slavery. There is also Thanksgiving, the commemoration of genocide turned into a day when Americans should think grateful thoughts before spending more than they can afford in order to celebrate Christmas. Christmas is ostensibly a religious holiday but is rarely treated as such. Labor Day was created to prevent acknowledgement of May 1, May Day, which commemorates just one example of U.S. state repression which took place in Chicago in 1886.

But this columnist just witnessed two special days in the Central American nation of Nicaragua. July 17 is known as Día de la Alegría, Day of Joy. On July 17, 1979 Anastasio Somoza, the U.S. puppet and dictator fled the country as the Sandinistas, Frente Sandinista de Liberation Nacional (FSLN) prepared to take power. Two days later on July 19, 1979, the Sandinistas emerged victorious after years of armed struggle. The close proximity of the two days makes for earnest and righteous popular celebrations.

Coming from a nation which changed the name of a holiday from Armistice Day, a celebration of peace, to Veterans Day and then added another celebration of war death with Memorial Day, the Nicaraguan holidays were a breath of fresh air. Both days celebrate a revolutionary process and the determination to fight against U.S. interference in that nation.

Observing these special days in NIcaragua is an opportunity to see that revolutionary change is possible. Of course in the U.S. people are told that nothing they want is possible. Americans want free health care but are told they can’t have it. They want the minimum wage to increase but are told they aren’t getting that either. They want student loan debt to disappear but are scorned for daring to mention what Joe Biden said he would do during his campaign. The lie is proof that he knows what the voters want. In a land where nothing is possible except mass incarceration, military spending increases and other forms of austerity, holidays with meaning for the average person are a revelation.

Of course Nicaraguans can get free health care and attend university for free, which is exactly why that country is under constant attack by the U.S. The hegemon will try to stamp out any revolutionary activity in this hemisphere. The foundation is indeed shaky if one nation with a population of 6.5 million is allowed to reject U.S. imperialism without suffering consequences.

The Ronald Reagan administration attacked Nicaragua from the very beginnings of Sandinista governance. In 1980 they began a 10-year long Contra war, of which the introduction of crack cocaine into the U.S. was a part. Millions of dollars were spent in the effort to undo the revolution, which played a role in the Sandinistas defeat in 1990. Voters returned them to power in 2006 and have continued to do so ever since. The U.S. has not given up, and played a large role in a 2018 coup attempt. Joe Biden picked up where Donald Trump left off, and led the bipartisan RENACER Act in 2020 which brought new sanctions against the Nicaraguan government.

The State Department and its partners in corporate media have not stopped their attacks on the Nicaraguan people and the government which they have elected. When Nicaragua enacts the same rules regarding the operation of NGOs as exist in the U.S., it is excoriated as a dictatorship by the New York Times, BBC, Washington Post and Associated Press. The oligarchic class who are defeated in elections have a friend in the U.S. state and are given access to 60 Minutes and other outlets where they can attack the government.

These attacks are a sign that the U.S. 150-year history of interfering in Nicaragua has not ended. The Monroe Doctrine which asserts U.S. ownership of this hemisphere is very much alive and tall tales of “conflict beef ” are a sign that more intervention is on the way.

But widespread celebrations for Día de la Alegría and 19 de Julio, July 19th, are proof of popular support among the Nicaraguan people. Under international law they have a right to sovereignty and to the governance of their choosing. They will not be dissuaded by war propaganda in U.S. media. They know about William Walker , an American mercenary who raised an army to create a slave state in Nicaragu in 1856. They know about the U.S. marine occupation from 1911 to 1933 and those living today survived the Contra war and the 2018 coup attempt.

This history explains the love for these commemorations and why any U.S. efforts at regime change will be met with fierce resistance. Instead of believing ginned up falsehoods, people in this country should be about the business of bringing about change to benefit themselves. Perhaps then we can have holidays that are meaningful for the right reasons.

Margaret Kimberley is the author of Prejudential: Black America and the Presidents . Her work can also be found on Twitter  and Telegram . She also provides original work on Patreon . Ms. Kimberley can be reached via email at Margaret.Kimberley(at)BlackAgendaReport.com.