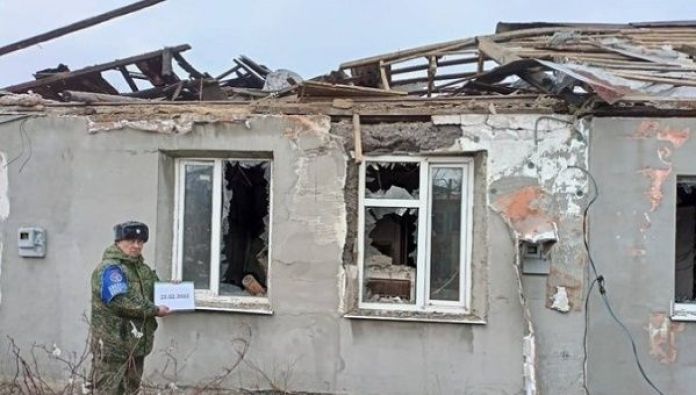 The U.S. media and Washington political establishment has been unified in condemning Russia’s invasion of Ukraine and in lauding the Ukrainian resistance.

Censored reports from the Donbass in Eastern Ukraine, however, make clear that the war was started eight years ago by Ukraine–after its legitimate government was overthrown in a U.S.-backed coup (known as the Maidan revolution), and the Donetsk and Luhansk provinces voted to secede.

Patrick Lancaster is an American video-journalist and U.S. Navy veteran fluent in Russian who has reported from the Donbass since 2014.

His latest video posted on March 10 shows how people living on the edge of Donetsk, one kilometer from the Ukrainian position in Peski, have been subjected to constant shelling by the Ukrainian military over the last eight years and have had to survive living underground in bomb shelters.

Last Thursday, Ukrainian army shells struck a children’s playground, a football field and state building near the post office—prompting residents to flee as it was “scary to stay here now.” Earlier a residential neighborhood had been struck by a grad missile, while other Ukrainian army attacks destroyed schools.

According to Danya, a young man Lancaster interviewed, the Ukrainian army did not have exact targets but “just shoots and don’t care where it lands.”

Another woman said that the targets that were hit “were not new targets. In 2014, they shelled here too. Exactly in this place. The same coordinates. Torturing us all these eight years.”

Fighting back tears, the woman continued: “They shoot and shoot and we still stay in our houses, with our children, with dogs…the children stay at home, in basements, running through broken windows, do not go to school, the whole day they sit at home. And I come from work now, I barely managed to work…how can we live in such conditions? Its been war here since 2014 and we haven’t left. And there’s no end, and no truth from anybody. They shoot with no break. In the daytime, in the morning, in the night, in the evening with no stop.”

Lancaster was taken into a cellar where families had been living for the last eight years. A woman told him that her daughter had been born on June 26, 2014, and that the war began in her village on July 19. She has “now been sitting here for over 7 years without leaving, a real child of war.”

These comments contradict the official narrative in the U.S. about Russian aggression on February 24 and show that Ukraine is not the moral beacon that the media presents it to be. Ukraine not only instigated the war but has committed significant war crimes. The victims are considered unworthy of public sympathy because the U.S. is behind their suffering—having helped orchestrate the 2014 coup that precipitated the conflict while providing Ukraine with a continuous flow of military aid.

When you donate to CovertAction Magazine, you are supporting investigative journalism. Your contributions go directly to supporting the development, production, editing, and dissemination of the Magazine.