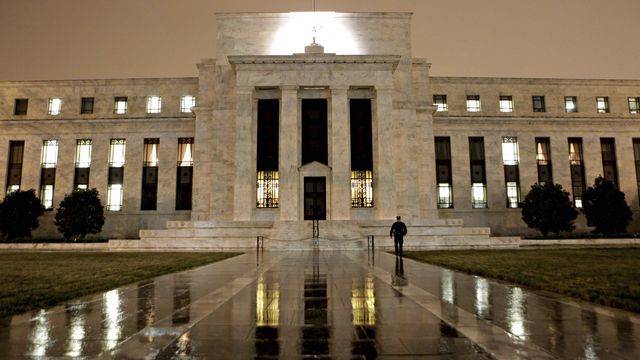 Two actions by US financial authorities this week indicate that the United States will respond to a looming downturn in the global economy by providing, once again, unlimited amounts of cash to financial markets.

On Wednesday, the Federal Reserve began an operation, lasting at least six months, to purchase around $60 billion of Treasury bills a month in response to sharp spikes in interest rates in overnight markets. The following day, in a separate action, the New York Federal Reserve injected $104.15 billion into financial markets to boost liquidity.

Together with the Fed’s decisions to twice cut interest rates, with the prospect of another cut at the end of this month, these moves make clear that, in conditions characterised by the International Monetary Fund as a “synchronised” global slowdown, any efforts to “normalize” monetary policy are well and truly over.

The European Central Bank has reversed its plan to end financial asset purchases and lowered its base interest rate further into negative territory, while the Bank of Japan continues to be the virtual sole purchaser of government debt and a major buyer of corporate shares.

In other words, the policy of the world’s major central banks, acting on behalf of a global financial oligarchy, is quantitative easing ad infinitum.

After the crash of 2008, the Fed and other central banks handed out trillions of dollars to the banks and finance houses whose actions had precipitated the crisis. This money did not go into the real economy but passed straight into the coffers of the financial oligarchs. Now, more unlimited cash is to be made available to the financial elites as they seek to slash the wages and conditions of workers.

The historic crisis of the global capitalist economy driving this program is exemplified in reports issued by the IMF for its semi-annual meeting Washington this week.

The most significant feature of the IMF’s World Economic Outlook report, which charts global growth, was not the cutting of growth projections for this year and the next, important as that was. It was the analysis that no significant upturn for the “big four” economies—the US, Japan, the eurozone and China—could be expected for the next five years.

At the end of 2017 and leading into 2018, the IMF and other global institutions were pointing to an upturn in global growth. This was taken as an indication that, at last, after the passage of almost a decade, the world economy was finally experiencing something of a revival.

The upturn proved to be remarkably short-lived. By the middle of 2018, the trend had turned down—a situation that has continued into 2019. As the latest IMF report makes clear, ongoing stagnation, with the increasing threat of outright recession, is now the “new normal.”

At the same time, the so-called “unconventional monetary policies” of the world’s major central banks—the lowering of interest rates to record historical lows and the pumping of trillions of dollars into the global financial system through the purchase of government bonds and other financial assets—have created the conditions for a new financial crisis, potentially even more devastating than that of 2008.

The rationale for these policies was that they would eventually bring about an economic expansion after the deepest recession since the 1930s. The resumption of economic growth would then see a return to a more “normal” monetary policy.

Nothing of the sort has taken place. Instead, the financial system has become so dependent upon and addicted to the endless supply of cheap money that even the slightest move to reduce it threatens to set off a crisis.

“Unconventional monetary policies” and the ongoing economic stagnation now operate in a vicious circle. Falling growth has meant that instead of inducing investors to place the money made available to them in the real economy, they have channelled it into ever riskier financial assets in order to expand their capital. However, such assets are the most likely to experience a collapse in any significant economic downturn, the signs of which are becoming increasingly apparent.

Such a prospect was set out in the IMF’s Global Financial Stability report produced for this week’s meeting.

“In a material economic slowdown scenario, half as severe as the global financial crisis,” it said, “corporate debt-at-risk [debt owed by firms that are unable to cover their interest payments with their earnings] could rise to $19 trillion—or nearly 40 percent of total corporate debt in major economies—above crisis levels.”

The report noted that very low rates were prompting investors to search for yield by taking on “riskier and more illiquid assets to generate targeted returns.” The result is that “vulnerabilities among nonbank financial institutions are now elevated in 80 percent of economies with systemically important financial sectors”—a share similar to that “at the height of the global financial crisis.”

The crucial questions for the working class the world over are: what are the implications of this new stage in the capitalist breakdown and how must it respond?

The answers are to be found through an examination of the political economy of the past decade.

While the policies of the central banks after 2008 appeared to create wealth out of thin air, all financial assets are, in the final analysis, a claim on the surplus value extracted from the labour of the working class the world over in the process of capitalist production.

This is why the processes of quantitative easing—starting with the bailout of the banks and financial houses in 2008-9 and the vast expansion of financial assets that followed—have been accompanied by a restructuring of class relations.

In the US, the bailout of the auto companies GM and Chrysler in 2009 by the Obama administration, and supported to the hilt by the UAW bureaucracy, which was a major financial beneficiary, was the start of an offensive against wages and conditions across the board.

In Britain, the austerity drive initiated by the Labour government and continued under the Tories has resulted in the biggest attacks on wages and social conditions going back 200 years. In every country, the working class has experienced stagnant and falling real wages and the destruction of social conditions.

At the same time, social inequality has risen to historically unprecedented levels. Such conditions are incompatible with the maintenance of democratic rights. Accordingly, the vast transfer of wealth to the heights of society over the past decade has seen the development of ever more authoritarian forms of rule and the promotion by the highest levels of the state of ultraright-wing and fascist forces, of which the Trump presidency is only one expression.

Today, amid a deepening breakdown of their entire economic order, marked by deepening trade and military conflicts, and bereft of any program to alleviate it, the ruling classes are confronted with a rising tide of class struggle.

They have only one policy—the escalation to new heights of all the attacks they have carried out over the past decade.

Once again, the US auto industry is at the centre of this offensive. The central drive of General Motors, acting on behalf of Wall Street, is to establish new levels of even more intense exploitation in line with the methods developed by Amazon and firms in the so-called “gig” economy.

But after decades of suppression at the hands of the trade unions and social-democratic parties, the international working class is striving to break free of the straitjacket to which it has been confined and to assert its own independent interests.

The development of this movement depends above all on the recognition by workers that what they confront is not a series of problems that can be resolved by patchwork reforms, but the decay and crisis of an entire socioeconomic order, and that the way forward lies in the fight for political power on the basis of a program for the reconstruction of society on socialist foundations.