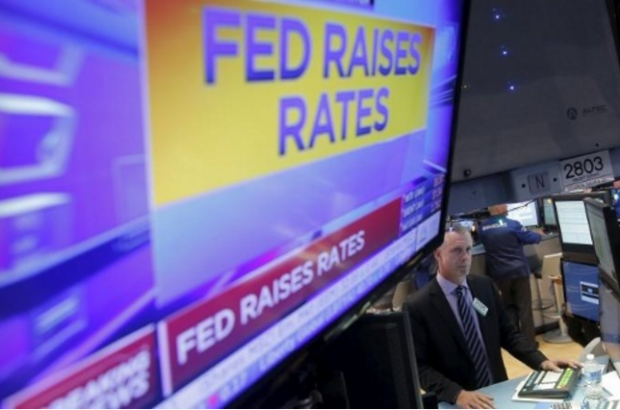 Central Banks Out Of Control

Above Photo: Traders work on the floor of the New York Stock Exchange (NYSE) shortly after the announcement that the U.S. Federal Reserve had hiked interest rates for the first time in nearly a decade in New York, December 16, 2015. |Reuters

On Dec. 16, 2015, the U.S. central bank, the Federal Reserve raised short term interest rates. The move ended more than seven years during which the Fed kept rates at a near zero 0.25 percent or less.

The rate hike also means the U.S. economy, already not doing all that well, may slow further in 2016 as well, contrary to what U.S. media and ‘spin doctor’ economists are claiming. Ignored in the U.S. press is the fact that, in the past four years in a row, every winter quarter the U.S. economy collapsed to near zero or negative in GDP. Will that now happen again – a fifth time – this coming January-March 2016 as a result of the Fed rate rise? Quite possibly.

The U.S. Fed reduced short term rates to nearly zero in 2008-09. The excuse was the rates were necessary to generate economic recovery. But even recent Fed studies have concluded the zero rates since 2008 have had minimal effect on the U.S. real economy.

Is the U.S. Economy on the Brink?

The real U.S. economy since 2008 has grown at only roughly half to two-thirds its normal rate. Decent paying jobs in manufacturing and construction today are still a million short of 2007 levels. Median wages for non-managers are still below what they were in 2007, and households are piling on new debt again to pay for rising medical costs, rents, autos, and education. Retail sales are slowing. Construction activity is only two-thirds what it was and U.S. manufacturing is contracting again. The gas-oil fracking industrial boom of 2012-2014 – a major source of growth – has ended this past year and mass layoffs in the hundreds of thousands are now occurring in mining, manufacturing and transport. Reflecting the true weakness of the U.S. economy, prices are slowing and are now at a historic low of 1.3 percent and heading lower, as the United States – like Japan and Europe – is drifting toward deflation.

The Fed’s 0.25 percent rate hike will do nothing positive for this scenario for the U.S. economy. It can only have a further negative effect on all the already weakening trends. The only question is how much negative.

The Fed rate hike will raise the value of the dollar as it further drives up long term U.S. interest rates, already having risen by more than 1 percent the past year. The further rising dollar and interest rates will slow U.S. manufacturing and exports – already contracting – even more. U.S. construction will shift from modest growth to contraction. Job creation will slow. Working class real wage income will decline even more in 2016.

Central Banks in Europe and Japan

Central banks in Europe and Japan, flooding their economies with QE money injections since 2013, waited the Fed’s recent rate rise and held off in recent months from further expanding their QE programs and thus further devaluing their own currencies for the time being. The Fed’s rate hike, by raising the U.S. dollar, has done that for them – for now. Europe and Japan central banks will thus absorb Fed hike, wait a few more months, and then add more QE more devaluations again later in 2016.

That means both current, and more coming, Euro-Yen devaluations that will further intensify global currency wars already underway, as more sectors of the global economy fight over a shrinking global trade pie by trying to ‘beggar their trading neighbors’ by stealing exports from each other.

The central banks of United States, Europe and Japan enriched their corporations and financial investors by tens of trillions of dollars since 2008 with their zero rates and QE policies, while leaving the rest of the economy behind and struggling. Their policies failed miserably – for all but the rich – for the past seven years. Now they are about to fail again, with further disastrous results.

As central banks in the advanced economies shift policies again – the U.S. raising rates and Europe-Japan adding to QE programs – the combined effects are intensifying global currency wars, setting in motion economic ‘cat fights’ worldwide over shrinking exports, while running the risk (in the United States) of even slower growth and stagnation.

In other words, central banks in the United States, Europe and Japan are ‘mucking up’ the global economy again.

Anticipating the rise in U.S. rates, and responding to the QE-driven devaluations by Japan and Europe, the People’s Bank of China, its central bank, last August devalued its currency, the Yuan, by almost 4 percent. This was the lowest possible, given that China has had a policy of pegging the Yuan to the U.S. dollar since the 2008 crisis. However, China and the IMF last week agreed to have the Yuan become a global trading currency. This means the Yuan will become de-pegged from the dollar. So as Fed rates and the dollar rises, the Yuan will in effect devalue in turn.

With more devaluation of the Yuan inevitable, China has will now fully join the ranks of the global currency war. It cannot continue to allow the Yuan to continue to rise against the Yen or the Euro, as it has in recent years by more than 30 percent and 20 percent, respectively, with its own exports and economy slowing. Nor can it allow the Yuan to rise with the dollar, inevitable if it remains pegged.

The Yuan’s devaluation will allow China to recover some of its lost exports. But a declining Yuan will lead to other Asian economies devaluing their currencies as well. That will mean that Japan will expand QE and devalue further in 2016 in response to the Yuan and other Asian currencies. Europe will then almost certain follow. Competitive devaluations and more intense currency war is the outcome.

The Fed’s rate rise has thus sets in motion a further slowing of the U.S. economy, more QEs, further currency devaluations in Europe, Japan, China, resulting in intensifying currency wars, and more in fighting over a slowing global export and trade pie.

Those impacted the most negatively will be emerging markets – caught between Fed rate hikes and competitive devaluations by Europe, Japan and soon China as well. Emerging markets will be forced to devalue their currencies even further and will do so even more rapidly. That means accelerating import price inflation, faster capital flight out of their economies, slow investment into them, at the cost of jobs, rising unemployment, social services cuts, and even more social and political destabilization and unrest.

In short, central banks in the advanced economies have begun ‘exporting their economic stagnation’ to emerging market economies. Can emerging markets repay the interest on their US$40 trillion increase in corporate debt since 2010? Probably not. It is therefore looking increasingly likely the next global financial crisis will originate in emerging markets with more corporate and sovereign debt defaults. It’s just a matter of time, and which comes first. But whichever, the crisis origins is traceable to the central banks of Europe, Japan, and United States.