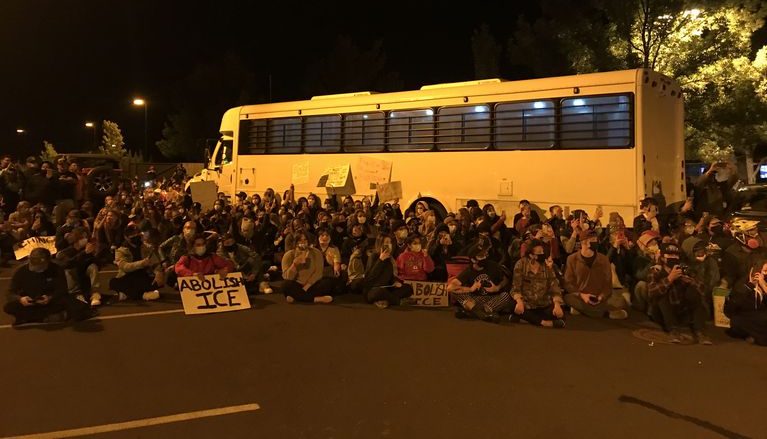 An attempt by Immigration and Customs Enforcement officers to detain two men in Bend did not go as planned Wednesday afternoon, after hundreds of protesters stalled the action for more than 10 hours, leading to a standoff with Border Patrol agents later that night.

Immigration attorney Micaela Guthrie, who was among the first advocates on the scene, said the men were taken into custody in the morning, then loaded on to two buses. One man was detained at a gas station and the other was pulled over in his car, the men told a translator by yelling through the closed windows of the bus.

One of the men, Marco, was identified only by his first name by a family spokesperson, Carlos Sanchez. Sanchez said Marco was taken around 5:45 a.m. PT Wednesday. He was allowed to call his wife around 1 p.m., according to Sanchez. That set off a wave of social media reports, with people driving from all over Central Oregon to surround the buses.

People quickly descended on the area and stopped the buses when they located them in a parking lot behind a hotel in Bend’s Old Mill District. They stood in front of the vehicles and refused to leave, others parked cars in the way. Family members leaned and wept against the sides of the bus, pleading with the ICE contractors operating the bus to allow them to give the men food and water. A small boy cried: “Papa, Papa, I love you.”

According to Bend Police Chief Mike Krantz, a federal agent called the police department around 1 p.m. and asked for assistance with people who were blocking their path.

Bend police officers arrived and initially told the crowd they were trespassing. Krantz said those officers were at a training nearby and arrived in “SWAT gear.” They eventually left and were replaced by officers wearing standard police uniforms.

“Bend police are currently on-site to protect the life and safety of our community, and are not there assisting the role of ICE,” Krantz said, noting that Oregon has a sanctuary state law that prohibits state and local resources from being used to assist federal immigration enforcement.

Krantz personally visited the scene around 10 p.m. and made a brief statement to the crowd.

“There will be federal agents coming here, and they will ensure the safety of their employees,” he said.

Protest organizers responded to the crowd in English and Spanish, pleading with demonstrators to be peaceful no matter what, but not to leave the area.

“Esta noche es paz,” Gus Juarez of Bend boomed through a megaphone, asking people to sit down before the agents came.

Around 11 p.m., at least a dozen Border Patrol agents marched up to the crowd, with some making their way around the side of the bus. At least three people were pepper-sprayed as the agents approached the bus to lead out staff and the detainees. Part of the crowd pursued the officers as they left, but many people stayed with the now empty buses, and eventually dispersed.

Guthrie, the immigration attorney, said the men who were detained have lived in Central Oregon for more than a decade.

Over the course of the day, Bend City Councilor Barb Campbell parked her car in front of one of the buses. She asked for ACLU representatives to intervene. In a statement on Twitter, the ACLU of Oregon said it does not have representatives or legal observers in the area, but was in communication with “attorneys and community members in Bend.”

Bend Mayor Sally Russell took to Twitter and called for people to leave the area.

“I’ve been informed that both men being detained have warrants out for their arrest. This is not a sweep for undocumented immigrants,” Russell wrote. “Let’s please keep our community safe. Please leave peacefully.”

Regarding the news of ICE in town:

I understand people’s concerns, and I am grateful that our city, Bend, does not use funds, personnel, or equipment to enforce federal immigration laws or to detain people based on immigration status. https://t.co/uG0s2vEWrR

“The two individuals arrested each had a history of criminal violent behavior,” ICE spokesperson Tanya Roman said in a statement without offering specific details.

“While ICE respects the rights of people to voice their opinion peacefully, that does not include illegally interfering with their federal law enforcement duties. ICE will take all necessary measures to ensure the safety of its officers and detainees, and will vigorously pursue prosecution against anyone who puts them in harm’s way,” Roman said in a statement.

The ACLU of Oregon announced that the Innovation Law Lab, a Portland-based nonprofit, had filed an emergency motion in federal court seeking to stop ICE from transporting the men out of Central Oregon.

“We won’t let our community members be taken from us. We will not abide the separation of families,” said Rev. Erika Spaet of the statewide Interfaith Movement for Immigrant Justice. “Our faith, our conscience, our love of neighbor is seeing its full strength here today in Bend.”

Flight data showed the U.S. Department of Homeland Security sent a plane from Bellingham, Washington, to circle the protest for hours. Similar planes have circled Portland protests for racial justice at least three times in recent months. Willamette Week reported the planes have likely been used to scrape cellphone data transmitted during demonstrations.

Bend police chief in his first week in the job arrives to warn protestors federal agents are coming to break this up. pic.twitter.com/X2uu6TRaWh

Deschutes County District Attorney John Hummel, who spent hours at the protest and said he supported the group’s First Amendment rights, took to Twitter after the federal officers left.

“I’ve never been so disgusted by my government,” Hummel wrote, “and so proud of my community.”

Presbyterian pastor Morgan Schmidt, who had been organizing the crowd to sit down if approached by police, closed the night with a message: “I’m looking at a lot of you with a lot of privilege, I know I’ve got it. But we get to use our voices, use our resources and our new awareness, to speak on behalf of our neighbors.”