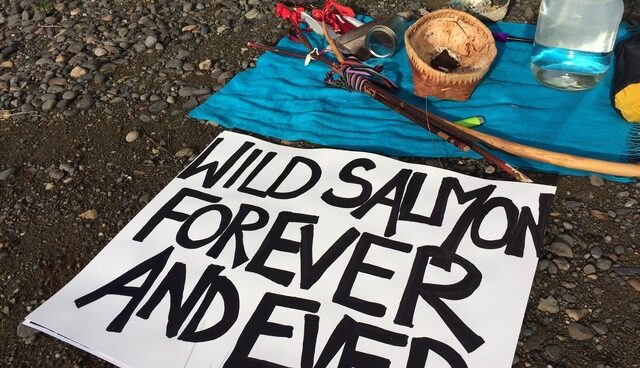 Ceremony To Stop A Pipeline

A group of Secwepemc people held a canoe and kayak ceremony Saturday morning in Kamloops in opposition to the Trans Mountain Pipeline expansion project drilling under the Thompson River.

The journey began at Adams Lake and the group kayaked and canoed their way to the Mission Flats area for a potluck dinner and games.

“Families from our Secwepemc Nation came together for the No TMX Canoe and Kayak Journey today to be in ceremony and offer prayers and protection for our clean water and our wild salmon,” says Anushka Nagji, a Secwepemc activist.

“The Canadian Federal government’s TMX Pipeline and their ongoing occupation of our territories is encroaching on our consistent presence and land usage in this area, where we fish, gather medicines, hunt and get our families together since time immemorial. Short term gain in jobs is long term loss in the integrity and dignity of our territories and our children’s futures and we do not consent to that,” she adds.

Construction in this area has already been delayed by a week, and the group says they will continue to try and have it pushed back further by asserting sovereignty and usage in Secwepemc territory.

“A stop-work order must be issued as the pipeline construction is actively destroying pit house and significant cultural sites along the river on Mission Flats Road and in Kenna Cartwright Park,” adds Nagji. “As well as threatening the wild salmon returning home in a year when the salmon count is the lowest it has been in recorded history.”

The Secwepemc people say they observed the TMX Pipeline Corporation working overtime on Thursday, preparing to drill under the Thompson River without the consent of the Secwepemc Nation.

“Canada’s national federal project, the Trans Mountain Pipeline does not have the consent of the Secwepemc to drill under the Thompson River, to desecrate and destroy pit houses and other sacred and significant cultural sites, to threaten our wild salmon, our water and our future generations,” Nagji explains.

“The pipeline will not be built through free, unceded and unsurrendered Secwepemc Territory. The RCMP, the provincial government and the federal government, do not have jurisdiction here.”