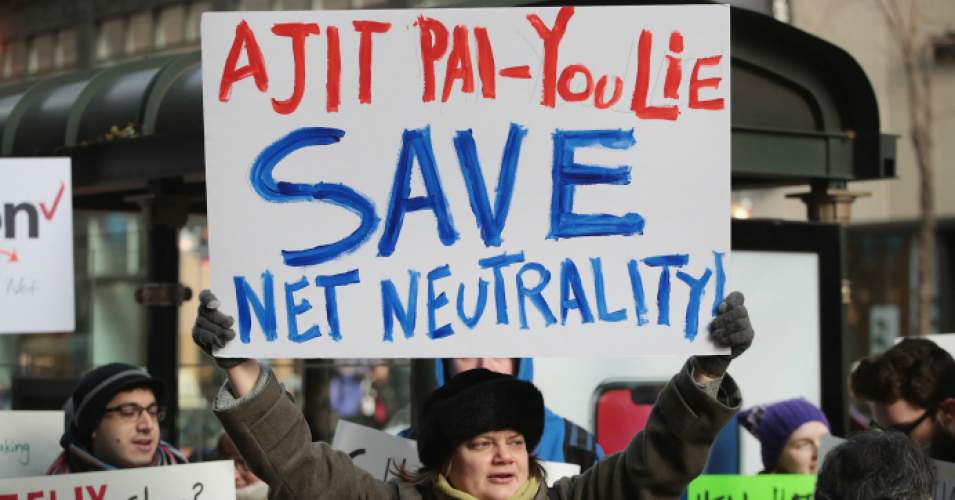 Washington – On Tuesday, Free Press filed a letter with the Federal Communications Commission that responded to the agency’s attempt to fix problems in its order that repealed Net Neutrality rules and tossed away its broadband-oversight authority. The proposal, scheduled for a vote at the FCC next week, responds to the decision by the U.S. Court of Appeals for the D.C. Circuit that remanded portions of the unpopular repeal to the agency for further consideration.

Earlier this month, FCC Chairman Ajit Pai circulated his proposal to address three issues the court of appeals raised in 2019. At that time, the court ordered the FCC to examine the impacts of removing Title II as a source of authority for broadband’s inclusion in the Lifeline subsidy program. The court also ordered the agency to analyze and account for the ways the repeal of Title II authority would impact public safety and broadband-infrastructure competition policy.

Chairman Pai claimed that his repeal of Title II protections has created a better and more resilient internet for everyone, with increased investment in broadband infrastructure and connectivity by the nation’s largest internet service providers.

This conclusion is “staggeringly wrong,” Free Press argues in its letter. The FCC “defies the court’s instruction to take a more serious look at these three topics, and essentially says that the reasons found wanting in the [repeal] were good enough all along.”

As the letter explains: “This abdication of authority over the nation’s essential broadband telecommunications networks would have been wrong under any circumstances. It lands especially poorly during a global pandemic that has highlighted the searing importance of universal, affordable and open internet connectivity.”

The filing also highlights how the Pai proposal would sacrifice broadband subsidies if the agency’s “strained legal contortions on maintaining Lifeline support for broadband fail to convince the courts,” demonstrating that this “flagrant indifference fits with this Commission’s history of attacks on the Lifeline program; and during a global pandemic when families are more reliant on broadband connectivity than ever, this is even more despicably cruel.”

“We’re dismayed by the Trump FCC’s continued indifference to people’s plight. Yet we’re ready as always to call out the agency for spreading falsehoods about its track record since it ditched its authority to protect internet users.

“Under Chairman Pai, the agency has ignored reams of data showing declines in capital expenditures by many major broadband companies, despite his false promises that repealing these rules would increase investment. More important than Pai’s debunked debating points are his dereliction of duty. While he’s busy congratulating himself for his contrived successes, his FCC has disregarded the tens of millions of people in the United States who are unable to afford the types of connection needed to face the many social, economic, health and educational challenges of the COVID-19 emergency.

“The Trump FCC’s decision to forfeit its Title II authority over broadband-internet service has undermined its ability to protect the Lifeline program, deployment rights for competitive broadband providers, and public-safety uses — a glaring abandonment during a pandemic that has students, workers and patients more reliant on the internet than ever. The best Pai offered people who are struggling to connect during this crisis was a toothless, voluntary pledge asking internet providers to please refrain from shutting off customers’ service or hitting people with unreasonable overage fees.

“Pai’s ongoing refusal to consider accurate data and draw proper conclusions on broadband investment will have serious and harmful implications for the future of broadband provision and competition. Any objective look at the facts reveals that Pai’s policies aren’t providing the magical solutions he’s promised. Similarly, the Commission’s Republican majority has willfully ignored the public-safety concerns raised by emergency responders and other officials — instead pinning all hopes on less-expert analysis from internet service providers.

“Pai has left himself with an empty toolbox; his ‘exhortations’ to motivate internet providers to behave are nothing more than a PR exercise. His claim that the internet is ‘better, stronger, and freer than ever’ doesn’t ring true for millions of low-income families who are worried about paying their bills, for school districts that are forced to front hundreds of thousands of dollars to connect students, or for communities of color who remain disproportionately disconnected. Nearly 80 million people in America lack an adequate broadband connection at home today — yet Chairman Pai has the gall to brag about his alleged accomplishments.

“In our filing we set forth the best path to remedy these harms: The FCC must correctly reclassify broadband as a Title II service, protected by strong open-internet rules, and restore the agency’s authority to ensure that broadband is truly available and affordable for everyone.”