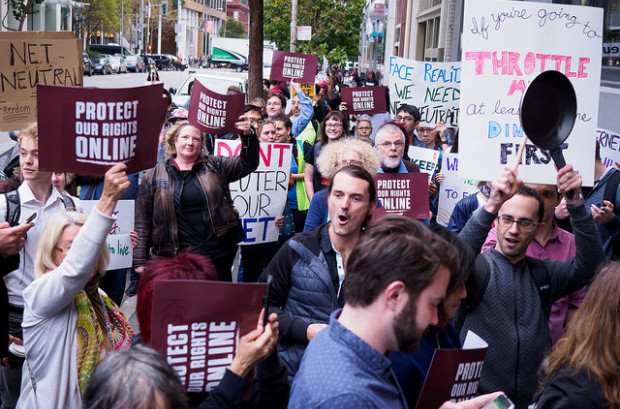 Pai will release his proposed rule changes on Wednesday {Nov. 22]. According to reports, the chairman will seek to overturn nearly all of the Net Neutrality safeguards put in place during the Obama administration. In 2015, the FCC grounded its Open Internet Order in Title II of the Communications Act, a move that follows the laws Congress wrote and that federal appeals courts have twice upheld.

Pai is planning to eliminate the “bright line rules,” which prohibit blocking, throttling and paid prioritization. His proposal would also take away the general conduct rules and other protections against cable- and phone-company discrimination. Under the current rules, ISPs can’t “unreasonably interfere with or unreasonably disadvantage” people’s ability to access and use the lawful content, applications, services or devices of their choosing.

This broader mandate to prevent unreasonable ISP discrimination, even when it doesn’t fall neatly under a bright-line prohibition, is crucial to preventing interference with internet traffic at interconnection points and other “upstream” bottlenecks that ISPs can abuse.

Even worse, Pai plans to remove Title II classification of broadband internet access service providers. Title II gives the FCC the authority to treat companies like AT&T, Comcast and Verizon as common carriers of internet content. Common carriage promotes interconnection, universal service and competition among carriers, and is essential to preserving free speech for those who use the communications network.

Pai’s proposal reportedly does little to clarify what authority the FCC would have to protect the open internet going forward, leaving the transparency rules the agency might retain on shaky legal ground at best.

The FCC plans to vote to overturn the 2015 protections at its open meeting on Dec. 14. The December decision will be the culmination of a seven-month proceeding, during which tens of millions of people urged the agency to preserve the safeguards put in place under the Obama administration.

“What Chairman Pai has proposed is dangerous and wrong, and he’s going about it in the most incoherent and incompetent way possible. The proposed rollback of Net Neutrality rules makes no sense. It ignores the will of people from across the political spectrum who overwhelmingly support these protections. It ignores the law and the courts, which have repeatedly upheld the 2015 Title II rules. And it ignores the vibrancy of the internet marketplace following adoption of that 2015 order, with incontrovertible economic data showing that both investment in networks and online innovation are flourishing under the very same rules Pai wants to destroy.

“Despite Pai’s fanciful tales of gloom and doom, there’s no need for a reactionary rewiring of the FCC’s rules. Free Press has shown time and again that Title II is the best and only foundation in present law for Net Neutrality rules; it also gives the FCC the authority to enforce other rules related to broadband affordability, privacy and competition. All of this would be lost if Pai insists on jettisoning Title II.

“All of Pai’s bluster is simply cover for yet another massive giveaway to the handful of media conglomerates that want to control communications in the United States. The most-hated and worst-rated companies will be free to block, throttle and discriminate against your speech on the internet if Trump’s FCC chairman gets his way. Companies like AT&T, Comcast and Verizon will be free to censor online speech and manipulate economic activity to their favor, while taking away the educational opportunities and political-organizing tools essential to millions of people across the country.

“The open internet uplifts the voices of people of color and racial-justice advocates, activists and dissenters of all stripes, independent content creators and journalists, and entrepreneurs. That’s why these constituencies have joined together, alongside millions of individual internet users, to demand that the FCC leave the 2015 rules in place.

“Pai admitted in April, even before he launched this process, that he’d already made up his mind to unravel these popular protections and abandon the legally sound definition that makes Net Neutrality enforceable. But to surrender the FCC’s authority to keep the internet open, Pai has had to prop up flimsy economic and legal arguments. He’s repeatedly lied about the state of investment in networks, which have actually increased in the two years since the rules went into effect.

“Ajit Pai is the sole cause of any legal or economic uncertainty affecting ISPs right now, because that’s exactly what his knee-jerk proposal to abandon the prior administration’s achievements creates.

“One thing is certain: If passed, this proposal will face withering scrutiny in court. The FCC has lost every time it’s tried to base open-internet protections on anything other than the Title II authority granted to the agency by a bipartisan congressional vote. This time should prove no different.”