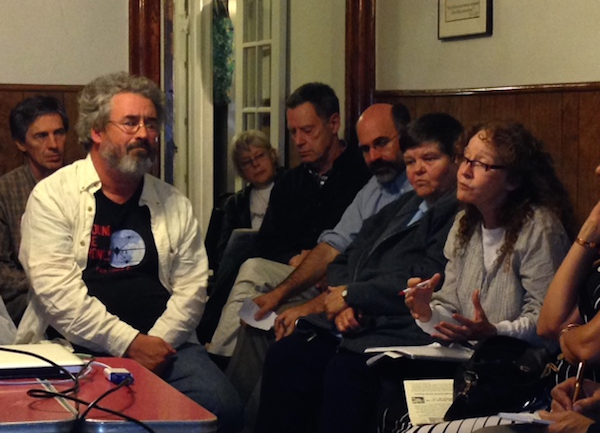 On October 7, 2014, Kathy Kelly and Georgia Walker appeared before Judge Matt Whitworth in Jefferson City, MO, federal court on a charge of criminal trespass to a military facility.  The charge was based on their participation, at Whiteman Air Force Base, in a June 1st 2014 rally protesting drone warfare.  Kelly and Walker attempted to deliver a loaf of bread and a letter to the Base Commander, encouraging the commander to stop cooperating with any further usage of unmanned aerial vehicles, (drones) for surveillance and attacks.

Brian Terrell, who also attended the hearing, has previously been tried before Judge Whitworth on the same charge. In October of 2012,  Whitworth sentenced him to the maximum penalty of six months in prison.  His co-defendant, Ron Faust, also went to trial and was initially sentenced to five years probation which was later reduced to one year. Mark Kenney, also a co-defendant, had pled guilty and received a four month sentence.

Kathy Kelly noted that drone strikes on October 7, 2014 killed seven people in Pakistan and that this is the third day in a row of drone attacks in Pakistan’s Waziristan area. On October 6th, eight people were killed and six wounded. Today also marks the thirteenth year of U.S. war in Afghanistan, a country which was considered, in 2013, to be the epicenter of drone warfare.

“I feel we’re compelled by our conscience, “ Georgia Walker told a gathering of 35 people in Kansas City, the previous evening.  “We’re compelled by our own spirituality, to keep speaking up and to keep getting people to know that silence is complicity.  We have to speak out to say ‘Not in my Name.’”

“I’m sure that Georgia and I didn’t commit a crime,” said Kathy Kelly. “We tried to send out an alarm about a crime that’s being committed at the base.  Innocent people, including children are killed by the drone strikes.”

Kelly and Walker later met with supporters and attorneys to discuss plans for a vigorous defense on December 10th, International Human Rights Day.