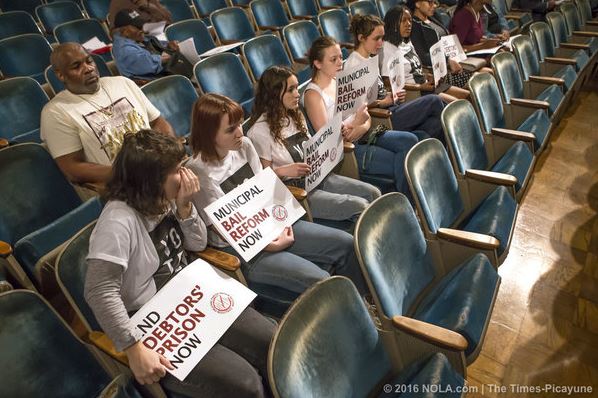 Above: Members of the crowd hold signs saying “Municipal Bail Reform Now” during a meeting at City Hall in New Orleans on Thursday, January 12, 2017. (Photo by Chris Granger, Nola.com | The Times-Picayune) (CHRIS GRANGER)

Does the idea of bail make sense to you?  If ours is a country where people are presumed innocent until they’re proved guilty, then we shouldn’t demand that criminal suspects dig into their pockets to get out of jail before they are tried.  If we are legitimately afraid that some suspects are a threat to the public, then we shouldn’t be comfortable with them getting out before trial no matter how much money they can pay.

Unfortunately, this metropolitan area and state have seen tragic stories involving threatening people making bail and non-threatening people staying in jail.  In 1998, Panos Tsolainos, a 50-year-old Slidell-area man who was originally arrested for paying a hit man to kill his ex-wife, made bail, and then he drove over to his ex-wife’s house and ran over with his car. A St. Tammany Parish judge was blasted for having reduced bail in the murder-for-hire case from $800,000 to $450,000, but in 1998 even that lower amount was said to be higher than any bail that had ever been made in St. Tammany Parish. If you didn’t know that the suspect’s father owned a Wall Street brokerage firm and that he was the former treasurer and president of a New Orleans shipping company, you may have believed that a high bail would keep him in jail.

That’s not how it worked out in New Orleans after Telly Hankton was arrested for first-degree murder in May 2008. A New Orleans judge set Hankton’s bail at $1 million, and Hankton – who federal officials would later say was running a $43 million drug empire – put up about $850,000 of his personal property to get out of jail.  And when he was out of jail, authorities say, he murdered again.

The same system that let Tsolainos and Hankton bail out of jail and commit murder is the same one that kept the mother of a St. Bernard Parish newborn locked up until she died. Nimali Henry, a 19-year-old woman with a 4-month-old daughter, was apparently outraged that the baby’s father was seeing another woman, and she went to the woman’s house when her baby’s father was there.  She entered that woman’s house without permission and was booked with disturbing the peace, simple battery and unauthorized entry of an inhabited dwelling.

What kind of society are we that we hold accused criminals in jail based solely on their ability to pay to get out? Before we get to the alleged criminal negligence that federal prosecutors say led to Nimali Henry’s 2014 death in St. Bernard Prison, let’s remember to be angry that she was even in jail in the first…

What emotions must have been churning inside a new teenaged mother whose co-parent has already left the nest to partner with someone else? Unfortunately, Henry isn’t here for us to ask.  She died in the St. Bernard Prison.  She had a clotting disorder called thrombocytopenic purpura, and her sister said she couldn’t get jail officials to pay attention attention to her sister’s condition.  Nor could the family afford to get her out after a judge set bail at $25,000.  “Nobody could come up with it,” Deshawna Henry said.

In March, Loyola law professor Bill Quigley wrote about two Texas church ladies who spent almost a week in jail in New Iberia on the suspicion that they pilfered two hot dogs, milkshakes and an Icee from a convenience store.   Even though they drove the 400 miles from Dallas to plead not guilty and present receipts they said proved their innocence, the judge decided that because they were from out of town, he needed to set bail to guarantee their appearance.  He expected the women to come up with $1,740 each. They stayed in jail until an attorney in town heard about their plight and paid for their release.

Thousands are held in jail in New Orleans because they aren’t able to afford bail.

Quigley spoke at a Thursday meeting of the New Orleans City Council in support of an ordinance that will allow more misdemeanor suspects to avoid pre-trial incarceration.  “This is a really wonderful thing the council is doing this voluntarily,” he said. “These are non-violent, city misdemeanors where people are arrested and booked and sit in jail just because they don’t have access to several hundred dollars. It’s not a significant challenge to the safety of the community.”

Quigley is right.  But there are people booked on state charges who are not a risk to the community, either, and it’s usually the case that judges require them to pay money if they want to go home before trial.  Those who do end up getting out ahead of trial aren’t necessarily less of a threat to the public, and they aren’t necessarily more innocent than those who are left behind; they just happen to have more financial resources at their disposal.

As we celebrate the City Council’s decision to stop requiring bail for misdemeanors, we should remember that even when it comes to felonies, bail is a problematic concept.

Jarvis DeBerry is deputy opinions editor at NOLA.com | The Times-Picayune. He can be reached at jdeberry@nola.com. Follow him at twitter.com/jarvisdeberry.