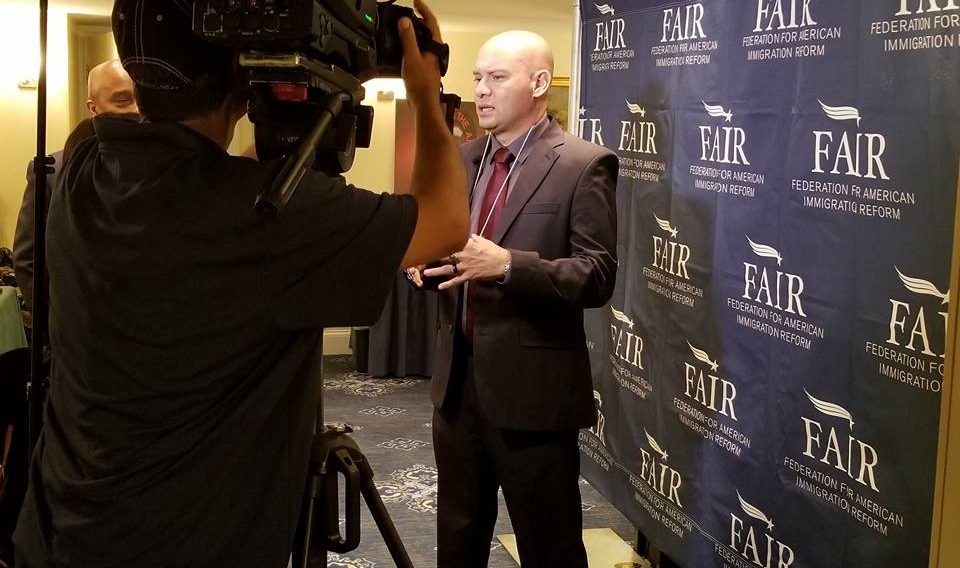 Much of the public discussion of our southern border today is one-sided. It is most often created by those with the most power and the loudest bullhorn; those in search of power, authority and money. So, it should come as no surprise to you that much of what we have been told about the border and of those who come to it are either not true or are highly exaggerated. It is after all the result of nearly a hundred years worth of the Border Patrol’s racist rhetoric and racist politicians creating ever more unfair and biased laws and policies. Many of which have little to do with creating an immigration system and more about scapegoating migrants for political and racist purposes while trying to make money off it. For more on this history, please take a look at this recent amicus brief on the history of our immigration laws.

Our immigration policies and laws have only become more cruel and inhumane over the years. Time and again we see the same people, the Border Patrol management and the anti-immigrant hate groups like the Federation of Americans for Immigration Reform (FAIR) sitting before Congress repeating a handful of anecdotal stories of violent non-citizens and misleading data that only portray all migrants as criminals, as invaders of our country to take our resources and harm our families. Never mind that this is a small percentage of migrants, that most are hard working people who come here for the same reasons as many of your ancestors did. These voices are the loudest and most well-funded voices on border enforcement, and they therefore control this narrative.

Republicans and some democrats never miss an opportunity to invite the anti-immigrant hate groups like FAIR to Washington D.C. and proclaim them as experts. The Border Patrol union works hand in glove with FAIR and others to disseminate their propaganda to not only their agents, but to the public as well. It is not unusual to find even mainstream media outlets quoting these anti-immigrant groups as experts. The union even used to list them on their website as official sources of information about immigration policy until they discovered the groups were listed on the Southern Poverty Law Center’s and the Anti-Defamation League’s list of hate groups. 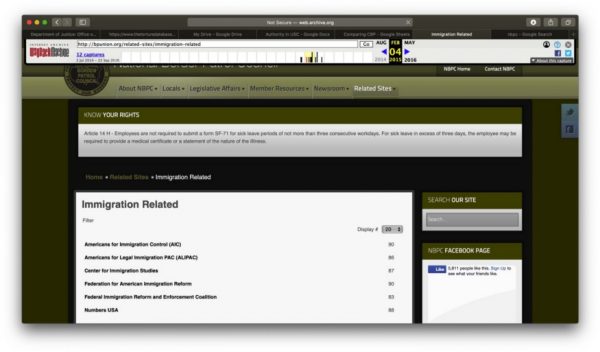 You don’t have to look too hard on the internet to see how the agency is still in bed with FAIR and other hate groups though. Border Patrol agents dutifully repeat the talking points and attend all their conferences, many administrative officials from the various anti-immigrant hate groups are now in leading management roles in our government agencies, writing and implementing their hateful policies against migrants. Child separation and zero tolerance policies were born in these hate groups. Additionally, some former agency chiefs end up being hired by contractors that supply the militarization of our border and those contractors end up contributing to political campaigns to push more contracts. It’s a self-fulfilling prophecy that looks something like this:

The legacy of allowing agencies like the Border Patrol to associate and work closely with these hate groups, allowing them to infiltrate the administration and testify as “experts” in immigration before Congress, to control the border narrative is what we see unfolding on our border today. Decades of this one-sided, faulty and racist narrative have directly led to the widely disseminated belief among many Americans and many in the media that immigrants are the cause of our border troubles. This idea that we cannot have a secure border if we are humane to migrants is their mantra, their bread and butter. They believe that migrants must be met with the heavy hand of law enforcement if we are to keep our country safe. Keeping migrants out, particularly migrants of color, is FAIR’s mission.

“Immigrants don’t come all church-loving, freedom-loving, God-fearing … Many of them hate America, hate everything that the United States stands for. Talk to some of these Central Americans.”
— FAIR President Dan Stein, 1997.

For the Border Patrol, republicans and some democrats, the border industrial complex and FAIR, a secure border means no people trying to enter on our southern border, no asylum. It means militarization; walls, guns, children in cages, asylum seekers in indefinite incarceration. All of which only serves those who make money off of militarization and detention and those who hate migrants simply for who they are. According to this narrative, images of large groups of brown families coming to our southern border is dangerous and shows how out of control the border is, how insecure we are…or does it?

If the measure of how secure our borders are depends on whether or not thousands of people come to our southern border to claim asylum or to to seek employment, then no our border is not secure and more importantly, they never will be. The only reason we measure border security in this manner is because this is how those dictating the narrative define it because it benefits them ideologically and financially, but the reality is that these measures are in no way indicative of a secure border.

The goals of these anti-immigrant hate groups are not based in security. They are based in racism, and racism is not interested in security or truth. The goals of the border industrial complex are not based in securing the border, but rather continuing to seek and define more threats to create more contracts that make them more money. The goals of many of the politicians pushing this narrative are not based in safe and secure borders, but more creating the look of insecurity to generate more votes and more contributions from border industrial complex contributors. The goal of the Border Patrol is more authority and less accountability or else they would stop lying to the public and admit that the vast majority of asylum seekers and workers are not criminals.

So, how should we measure security at our borders?

One way is to look at how many arrests and prosecutions Border Patrol and CBP make in narcotics, human trafficking, individuals with warrants, suspected terrorists, etc. There are dangerous people attempting to enter our country. There are criminals attempting to sneak past border officials. That is what CBP and Border Patrol’s missions are, to find and arrest these people. This means preliminary checks for anyone entering. It means Border Patrol is to intercept anything coming across the border without inspections. The percentages of those coming across our borders with criminal intent is low, even by their own statistics. The apprehension and sorting out of these criminals is the job of CBP and Border Patrol. Conflating migrants with criminals only confuses the process, leads to human rights violations and makes it difficult for agents to see and stop actual threats to national security.

For their part, the Border Patrol has stated time and again that they do not want to handle asylum seekers or unaccompanied children. I agree with them, they should not be doing this. We have seen under past administrations from both sides of the aisle what happens when we do this. They will cram migrants into small cells, slow walk processing to be cruel, separate families, hold them out in the hot Texas sun for weeks at a time and so on. It does not matter which political party is in power, this happens again and again.

But what if we take this responsibility away from the Border Patrol? What if we created an asylum system and worker visa program filled with people who work in these areas? What if we had a system that took anyone crossing our borders without inspection immediately out of Border Patrol custody and put them into this humanitarian system? If we stopped conflating immigrants and migrants with criminals? If we stopped allowing anti-immigrant hate groups who base their policies and arguments in racism to dictate the narrative? What if we had a narrative that looked more like this?

Border Patrol and CBP could focus more on real threats. Asylum seekers would not be held in their custody, workers could find employers who needed their labor, kids would not be held in their custody and everyone entering the country gets a records check. Those concerned with border security would see that both agencies are working on security issues and not processing migrants who are not criminals. Yes, there will always be people crossing our borders illegally. Yes, people with criminal intent who subvert the system will sometimes pretend to be asylum seekers or harmless workers. That is a given, but it is up to the agencies to determine who is who. That’s their job. However, having an actual asylum system separate from the immigration law enforcement agencies, would reduce a large amount of those crossing in between the ports. This in turn will allow the Border Patrol and CBP to better discern who is dangerous and who is not and it will keep migrants from being treated as criminals.

If the Biden Administration really wants to change this, they must commit to creating a robust and aggressive asylum system that can handle asylum requests in a humane and a timely manner. They must create a worker visa program to accommodate those willing to work and those needing their labor. They must create a system separate from the law enforcement agencies and stop expecting them to solve what is a humanitarian issue. They must listen to border organizations and professionals who have expertise in asylum and refugee systems and organizations.