Transparency and accountability have never been the strong suits of non-profit and for-profit charter schools.

Unlike the nation’s public schools, all charter schools (about 7,100) are run by unelected individuals, and many, if not most, charter schools regularly violate open-meeting laws, are not subject to public records laws, and avoid audits.

In these and other ways, non-profit and for-profit charter schools do not really want to be answerable to the public because they highly value their inherently private status, which is what allows them to cynically operate as pay-the-rich schemes under the veneer of high ideals. Charter school operators desperately want the public to accept as true that privately-operated charter schools exist “for the kids” and not to self-servingly line the pockets of privatizers and profiteers.

In this antisocial neoliberal context, non-profit and for-profit charter schools frequently claim to be open and welcoming, and often go so far as to encourage people to visit and tour charter schools. Charter school operators often create the illusion that they are eager to answer people’s questions and show off their schools. All of this, in turn, is part of the consumerist and commercial nature of charter schools. It is why, unlike public schools but much like private businesses, charter schools have large advertising and marketing budgets (which, of course, takes money away from the classroom).

But when push comes to shove, it is often hard, if not impossible, to get your foot in the charter school door, especially if you “ask too many questions.” Charter school promoters and operators crave all the hype but none of the scrutiny surrounding charter schools. It is safe to assume that many more problems would be exposed if there were real transparency in the segregated and deregulated charter school sector.

In December 2019, several months later, North Jersey Record reported on the many ways that the charter schools they exposed earlier in 2019 dodged accountability and transparency and made it difficult, even impossible, for reporters to gather reliable information about charter school operations and activities.[2]

“One charter school agreed to give us a tour of its high school but officials abruptly pulled the offer, saying they were advised to have their attorney answer our questions.”

“Officials at another charter school would only allow us to tour an empty school at night — and backed out of an interview when we pressed to have at least some of the discussion on the record.”

“And the spokeswoman for a large charter school network rebuffed our request to see its buildings, saying she likes to bring in reporters ‘who actually care about kids’.”

“But often our calls or emails were ignored. Some of the largest charter school operators in the state declined to answer questions about their financing or clarify details that we found in bond documents and other records.”

“One growing charter school network called in a public relations firm from California, which demanded questions in writing — and left most unanswered. It also refused to allow us to tour any of its buildings — including a multi-million-dollar renovation and expansion of a former Catholic school building being paid for with tax dollars.”

“Some schools were not forthcoming about the most mundane information.”

“When we asked another charter if one of its leased buildings was in use, we got no reply. A quick visit showed it was empty. A sign outside the building indicated it would be used again the following school year. But the charter school was still paying rent to a private support group that owns the building.” 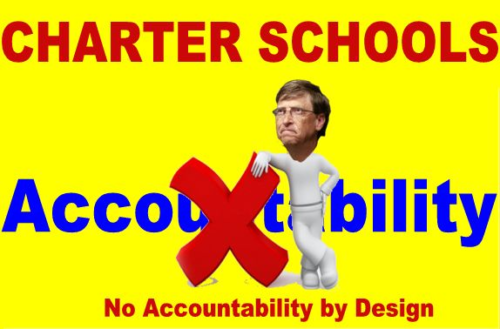 Numerous other examples of obstructive charter school tactics could be given. The point is that stonewalling and diverting are common in charter schools which claim to be “public,” “welcoming,” “transparent, “accountable,” and “open to all.”

The longer non-profit and for-profit charter schools are around, the longer education, society, the economy, and the national interest suffer. There is no compelling reason to have schools that generally perform poorly, enrich owners of capital at the expense of kids, are segregated and de-unionized, have high teacher turnover rates, over-paid administrators, are run by unelected individuals, spend tons on advertising, and that close regularly, leaving thousands of families distraught and livid.

The United States already has an amazing public school system that has educated 90% of the nation’s youth for well over a century—and all of this in the context of regular funding cuts, excessive unsound testing, teacher bashing, and lots of heavy-handed top-down policies. Americans are tired of having their public school system constantly demonized, bullied, and scapegoated by the rich and their political and media representatives, while privately-operated charter schools are allowed to make the rich richer. For these and other reasons, resistance to charter schools will continue to intensify.