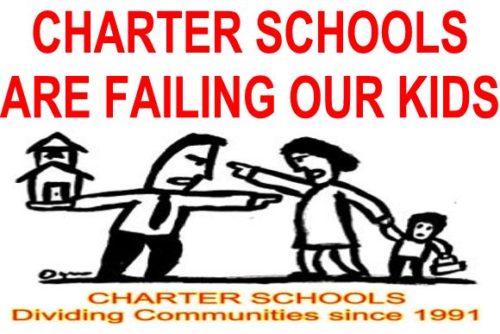 As opposition to charter schools grows, the public should expect a non-stop intensification in efforts by charter school advocates to keep mystifying charter schools in order to dupe the gullible. The desperate desire to prettify charter schools so as to keep looting public schools is driven by wealthy private interests obsessed with maximizing profits in the context of an economy that continually lowers the rate and amount of profit for owners of capital.

This unlimited greed compels short-sighted charter school supporters to defend the indefensible while ignoring reality. Pay-the-rich schemes like charter schools are critical to the rich and their allies. An end to segregated charter schools would necessarily mean an enormous loss of public money for wealthy private interests who operate with impunity.

The public should expect desperate charter school promoters to try to get lots of mileage out of this top-down “study” funded by wealthy private interests determined to privatize education. Charter school advocates will continue to conveniently ignore extensive research that shows that nonprofit and for-profit charter schools increase all forms of inequality and stratification, while also depriving public schools of massive sums of public money each year.