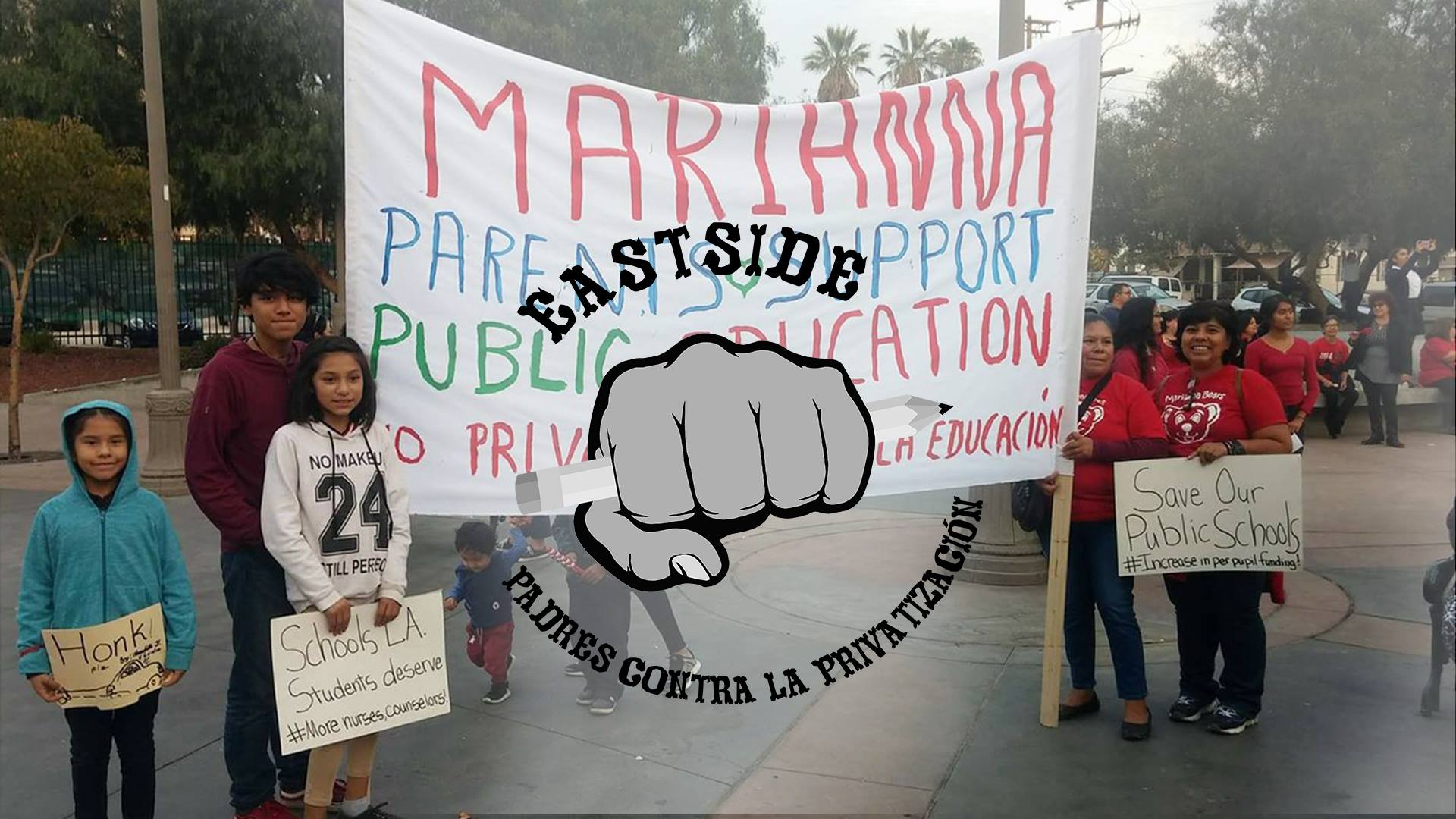 “Charter schools and their business models are not rooted in our community. They’re outsiders coming in to take resources and students.”

In honor of a new year with new beginnings, I have asked representatives of communities throughout the Los Angeles Unified School District (LAUSD) to express their concerns about the district and how they would like to move forward. In the first articles, Emiliana Dore wrote about how charter schools interfere in the fight for racial equity and Francine Matthews-Flores sharing her experiences with Hollywood money and power being used to steal space from a neighborhood school. The series continues with Eastside Padres Contra La Privatización writing about the saturation of their neighborhood with the privately run charter schools.

Eastside Padres is a group of parents, teachers, and educators who are based in Boyle Heights and East Los Angeles. They originally formed to fight off co-locations of public schools and other forms of privatization in their neighborhoods. The group has since expanded their fight so that they support and protect public schools under attack in other communities. The Eastside Padres have had success in stopping co-locations, bringing to light the injustices done to campuses by certain charters, and, along with Centro CSO, stopping the construction of a large KIPP charter facility. In this post, they share the harmful impacts of privatization on their communities:

East Los Angeles is a community rich in culture and a strong history of activism. Our youth led the student walkouts in the ’60s fought against the Vietnam war during the Chicano Moratorium and have since filled the streets protesting the racist policies by the Trump administration. Still, we have been vastly left behind by our local, state, and federal leaders. Policies to protect our local environment, improve access to health care and make sure that our children are well educated have been inadequate. Charter schools swooped in claiming they could fill this void, but their promises were empty. Their presence brought discord, scandals, left our public education even more underfunded, and did not outperform our local schools. The backers of charter schools with their desire to be ‘saviors’ hurt our community and arguably undermined much of the public good in East LA.

Several years ago the privatization machine turned on. Charter schools invaded our community with no public input, no public meetings, and no robust environmental reports. They charged in and did it fast. At every neighborhood event, they promoted their schools with flashy marketing presentations and shiny colorful brochures. With the arrival of each new charter school, every mailbox was flooded with mailers echoing the same empty promise: “We can get your child to college.” Time has proven that those mailers were nothing more than propaganda as the charters performed no better than our existing public schools and in some cases the outcome for their students was even worse.

It didn’t take long for privately run charter schools to saturate our neighborhoods. Corporate charters with big financial backing inserted their campuses in our neighborhoods without solid community engagement where we could discuss long vision and goals. A Big Lots store on Atlantic Avenue, which had served the community for years, was turned into a KIPP school. When a commercial property is replaced with a school it creates an economic dead zone. Did anyone ask us if we wanted to lose commercial opportunities when they developed that KIPP property?

On Cesar Chavez Avenue, KIPP took over a Los Angeles County building. For our neighborhood that relies on public agencies, the last thing we should do is transition a public property to any group that does not serve the public good one hundred percent. This public property was turned over to a corporate charter demonstrating a lack of vision and a disconnection to the community’s real needs. It also is a sad irony that a building on an Avenue named for one of American’s greatest champions for workers’ rights, Cesar Chavez, was turned into a product of an anti-union school system.

KIPP had a plan to culminate its invasion of our community in Boyle Heights. Their plan to build a huge school came to a halt when the community came together and spoke out against it. Even though the Boyle Heights neighborhood council voted against the project and many members of the community opposed it, former council member José Huizar voted in favor. Ultimately Centro CSO in partnership with Eastside Padres Contra la Privatizacion won and the mega KIPP was kept out of our community.

Unfortunately, it was not just KIPP who inundated our community, Animo Ellen Ochoa Charter Middle School took over one of the few local community centers, again undermining the public good. Alliance-Morgan McKinzie High School turned the popular 1st Street Store into one of their campuses. Now Alliance is starting to shut down some of their campuses. What does that mean for those properties? Instead of supporting our local public schools millions of public education dollars went to these temporary schools instead of being used to support our local schools. Again the public good is sacrificed for the few.

It is not just the speed and volume of charter school proliferation that is disconcerting, there is also the fact that charter schools are not held by the same environmental safety standards when building new or adapting older properties as the LAUSD schools. The fact is that there are many compliance hurdles for public schools but not for charter schools. Does anyone know how the charters removed the asbestos from any of these properties? Where was that community meeting? Additionally, how is it okay for the charter school, Arts in Action Elementary, to be built next to an auto body paint shop? Maybe it is legal, but is it right?

Experts know that communities adjacent to major highways are more susceptible to health issues including higher lead count in their blood. We are overwhelmed with highways, East LA has the 5, 101, 10, 60, and the 710 in our neighborhood. Using google maps Ochoa Middle School appears to be under 500 feet from the 710 freeway. While many LAUSD schools predate the freeways, opening new schools like Ochoa so close to major highways with the current data betrays those of us who rely on leaders to protect the common good. Sadly, our community also suffered from the environmental disaster caused by the Exide Battery Plant in nearby Vernon which pumped heavy metal toxins into our air for decades. We should demand that our leaders make sure every development is not subjecting our community to added environmental injustices, especially in schools. A fancy brochure is not the same as a thorough environmental impact report.

Then there is the issue of charter co-locations. Many charter schools take valuable space from our public schools. Extera, a corporate charter co-located on four campuses in our neighborhood schools. All of these efforts speak to a disturbing theme as to what happened in our community. Charter schools and their backers came into the East Side neighborhood with a mentality that they would be our saviors. People who lived in affluent neighborhoods and who have probably never even visited East LA outside of a drive by on the 5, were handpicked to sit on the governing boards of these charter schools. The result was a loss of local control.

Community input was not sought prior to this charter school invasion. No public meetings were held to hear our concerns. Nobody bothered to determine how this influx of privately run schools would affect the dozens of public schools that have served East Los Angeles for decades.

So what happened to the existing public schools, many of whom have been serving our neighborhoods since the 1920s? They lost resources and student enrollment. The co-located schools had to share their campus, including their yards, auditoriums, cafeterias, bathrooms, and classrooms. The existing schools had to figure out how to make it work adding more responsibilities to our principals and teachers. The co-located environment pitted parents against parents. This discord was not welcomed in our community. For the newly constructed schools, the community also had to deal with added impacts especially the schools in commercial corridors and busy intersections. No one wants to get caught in the traffic on Chavez since KIPP landed. When you have no local control you get a mess and such is the case with charter schools that were placed just about everywhere with no community input.

Our neighborhoods didn’t need saving. Self-determination has always been at the forefront of our community and our history. Charter schools and their business models are not rooted in our community. They are outsiders who came in to take resources and students. Now, we are saturated with charters.

A word of warning to other communities who are being circled by charter school advocates. Hold your elected representatives accountable. Gather your neighbors and inform them what happened in East LA. Do not fall for fancy brochures.

Remember that you are in charge of your neighborhood — do not let them invade your community. Otherwise, you can soon find yourselves like us with fewer community spaces, little environmental oversight, a weakened public good, no real significant education improvement, and a lot more traffic.

Your community does not need saving, it needs real leadership and it is up to you. You are your community’s hero.

Carl Petersen is a parent, an advocate for students with special education needs, an elected member of the Northridge East Neighborhood Council, a member of the LAUSD’s CAC, and was a Green Party candidate in LAUSD’s District 2 School Board race. During the campaign, the Network for Public Education (NPE) Action endorsed him, and Dr. Diane Ravitch called him a “strong supporter of public schools.” For links to his blogs, please visit www.ChangeTheLAUSD.com.