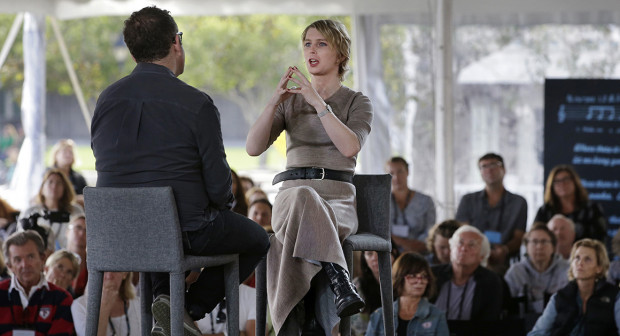 Above: Chelsea Manning (center) is interviewed by filmmaker Eugene Jarecki (left) on Sunday, during a forum, in Nantucket, Mass. | Steven Senne/AP Photo

Chelsea Manning told a crowd at a “creative thinkers” conference in Nantucket that she’s not a traitor as her critics have claimed and she did what she thought was the right thing to do.

This is only Manning’s second public appearance since being released from a military prison in May.

“I believe I did the best I could in my circumstances to make an ethical decision,” she told the crowd when they asked if she was a traitor.

The 29-year-old Manning is a transgender woman who was known as Bradley Manning when she was convicted in 2013 of leaking a trove of classified documents. She was released from a military prison in May after serving seven years of a 35-year sentence, which was commuted by President Barack Obama in his final days in office.

Tom Scott, who co-founded The Nantucket Project with Kate Brosnan, said they invited Manning for “clarity of understanding.”

“My brother and father are Marines. They would respectfully challenge some of her decisions,” he said. “Barack Obama commuted her sentence. My instinct is that he’s a good and trustful man. How do those two things mix? Seeing her in person offers, perhaps, the best way to decipher that.”

Several audience members said they were intrigued to hear from Manning. Sara O’Reilly, a Nantucket resident who has attended several past conferences, said the speakers are typically a “little edgy.” She said she doesn’t judge Manning and other people have done “far worse” things.

Scott said some of the attendees were upset that Manning was invited, but he didn’t consider retracting the invitation. Harvard University reversed its decision to name Manning a visiting fellow Friday, a day after CIA Director Mike Pompeo scrapped a planned appearance over the title for Manning.

Manning said Harvard’s decision signaled to her that it’s a “police state” and it’s not possible to engage in political discourse in academic institutions.

“I’m not ashamed of being disinvited,” she said. “I view that just as much of an honored distinction as the fellowship itself.”