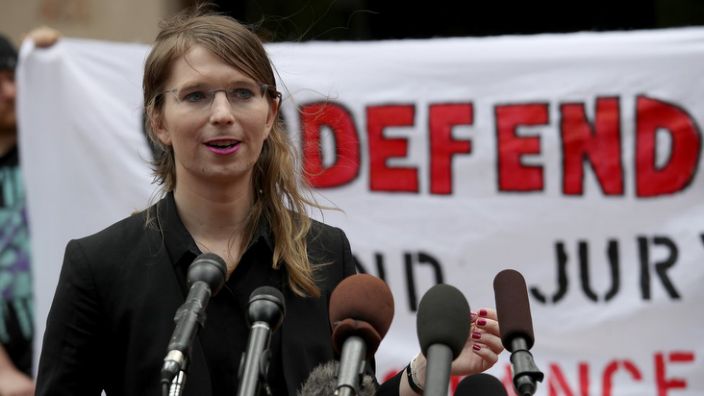 Above: Manning speaking outside of the grand jury in Alexandria, VA before being incarcerated.

CLICK HERE TO DONATE TO CHELSEA’s GOFUNDME TO COVER HER FINES.

Alexandria – Today, March 12, prosecutors in the Eastern District of Virginia ended the grand jury of Julian Assange and Wikileaks in which Chelsea Manning refused to testify. As a result, US District Court Judge Anthony Trenga ordered the immediate release of Chelsea Manning.

HUGE NEWS: Chelsea Manning @xychelsea has been ordered FREE after a year jailed for refusing to testify against @wikileaks.

She accrued over a quarter million dollars in fines, which are not being waived. #ChelseaManning #JulianAssange pic.twitter.com/6VnuhSd2RL

Manning has been incarcerated since May 2019. Judge Trenga had tried to coerce Manning into testifying by imposing a fine for every day she resisted even though she said repeatedly that she would not violate her principles, which include opposition to the secret grand jury system, and would never testify.

A hearing was scheduled this Friday on a motion for release filed in February 2020 by her attorneys. Manning was arguing that her long time in jail had shown she could not be coerced to testify and that her incarceration was a punishment, which is illegal under US law. On Wednesday, her lawyers and Alexandria Sheriff Dana Lawhorne reported she attempted suicide in jail. With the end of the grand jury and Manning’s release, the Friday hearing was canceled.

In May 2019, Manning wrote a letter to Judge Anthony Trenga, the presiding judge regarding her incarceration. The letter examined the history of grand juries and how they no longer serve their original purpose. Manning wrote:

“I am certainly not alone in thinking that the grand jury process, which at one time acted as an independent body of citizens along the lines of a civilian police review board, slowly transitioned into the unbridled arm of the police and prosecution in ways that run contrary to the grand jury’s originally intended purposes.”

After providing the judge with a “nuanced understanding of my conscientious objection to the grand jury” she wrote:

“Each person must make the world we want to live in around us where we stand… I object to the use of grand juries as tools to tear apart vulnerable communities. I object to this grand jury in particular as an effort to frighten journalists and publishers, who serve a crucial public good. I have had these values since I was a child, and I’ve had years of confinement to reflect on them. For much of that time, I depended for survival on my values, my decisions, and my conscience. I will not abandon them now.”

Manning has once again shown courageous political leadership, standing up to an abusive criminal justice system and exposing the corrupt grand jury process that has often been used for political purposes — from indicting anti-slavery activists to members of the Black Panther Party — and now against the political prisoner, Julian Assange for being an editor and publisher who told the truth about US war crimes, violations of international law and how US foreign policy dominated by corporate interests.

Manning has also shown great bravery in advancing trans rights. While imprisoned in Fort Leavenworth, Kansas, she fought for her right to treatment. She also struggled for her right to be held in the women’s prison in Alexandria. Her openness about being trans has been an inspiration to others. As Lexi McMenamin wrote: “One in six trans Americans — and one in two black trans Americans — have been to prison, according to Lambda Legal. Incarcerated trans people face higher levels of violence, and experience higher rates of rape and sexual assault. According to the National Center for Transgender Equality, trans people are ‘ten times as likely to be sexually assaulted by their fellow inmates and five times as likely to be sexually assaulted by staff.'”

The injustice against Manning continues. Manning’s attorneys sought to have the fines imposed by Judge Trenga vacated. Manning is facing more than $256,000 in fines, which have been accumulating at a rate of $1,000 a day. The court left those fines in place.

CLICK HERE TO DONATE TO CHELSEA’s GOFUNDME TO COVER HER FINES.

The incarceration of Manning was a violation of US law as the authority to incarcerate a recalcitrant witness was abused by Judge Trenga. Nils Melzer the UN Special Rapporteur on torture and other cruel, inhuman or degrading treatment or punishment wrote that Manning’s incarceration violated international law focusing on the prohibition against torture.  While we are pleased Manning has been released, she should have not served anytime in jail and the fines against her should be vacated.