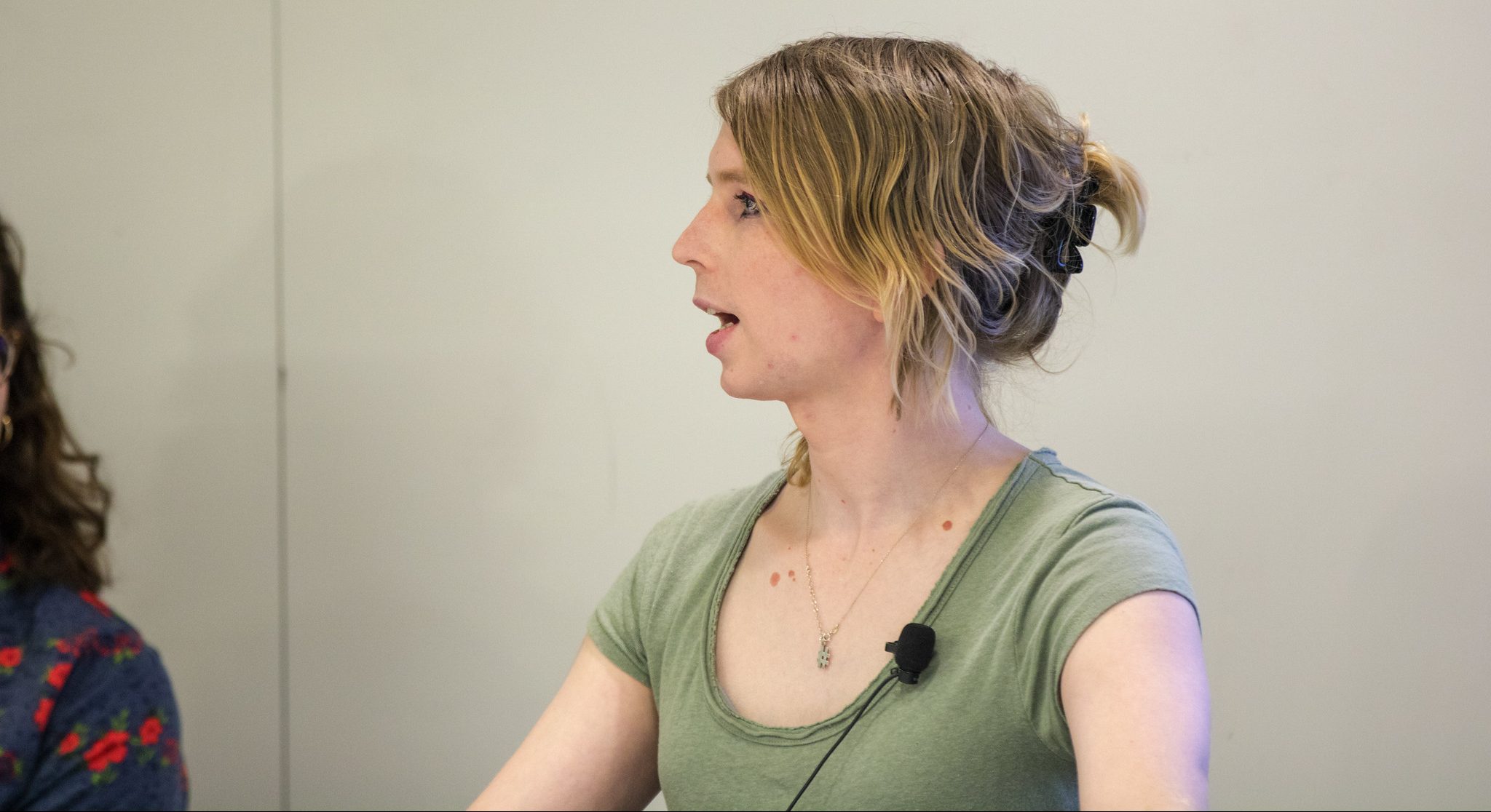 The courageous whistleblower Chelsea Manning has now been held in a federal detention center in Alexandria, Virginia for more than six months. Manning has not been charged with or committed any crime. She was sent to jail on March 8, 2019 for refusing to testify before a secret grand jury that has indicted persecuted WikiLeaks founder and publisher Julian Assange, who published the information she leaked exposing rampant US imperialist criminality.

As President Donald Trump threatened Friday to launch a catastrophic war against Iran, including an implicit threat to use nuclear weapons, the historic significance of what Manning and Assange did is clear. And it is also clear why every genuine defender of democratic rights and opponent of imperialism will be energetically fighting for the freedom of Manning and Assange.

Among the information that Manning provided to WikiLeaks in 2009-2010 was the infamous “Collateral Murder” video—which documented the indiscriminate killing of civilians and Reuters journalists in the Iraqi suburb of New Baghdad. She leaked a trove of 400,000 documents that became known as the “Iraq War Logs” and another 91,000 documents that became part of the “Afghan War Logs.” Over 250,000 US diplomatic cables were also published, revealing the daily intrigue and conspiracies engaged in by American embassies and consulates around the world. The revelations played a role in inspiring ordinary people in Tunisia, Egypt and elsewhere to rise up in revolution against dictatorship and oppression.

The world’s population was provided all the evidence necessary to demonstrate that the actions of the White House and Pentagon are not motivated by concern over “democracy,” “rule of law” or “human rights.” Rather, American imperialism operates as a predatory force of violence and intrigue to maintain US strategic hegemony and in the interests of the corporate profit of billionaire oligarchs.

Everything that Manning provided to WikiLeaks served to alert the public to the criminal operations of the US state. When she prepared to share the documents with the media, Manning wrote a readme.txt file that said, in part: “This is one of the most significant documents of our time removing the fog of war and revealing the true nature of 21st century asymmetric warfare.”

It is well known—going back to her arrest in 2010 and conviction and sentencing in 2013 to 35 years in prison on 21 charges of violating the Uniform Military Code of Justice—that Manning has always maintained that she acted alone in leaking information. The record is clear. She first went to the Washington Post and the New York Times with her classified downloads and, after these establishment publications expressed no interest, she turned to WikiLeaks.

Manning served nearly seven years in prison for her courageous actions, including detention at the Marine Corps Base at Quantico in a 6 x 12-foot cell with no window, as well as imprisonment at the US federal prison at Fort Leavenworth, Kansas. Her 35-year sentence was commuted—but not pardoned—by President Obama in January 2017 just days before the inauguration of Donald Trump.

Regardless, the state apparatus is attempting to force Manning to recant her previous testimony in order to assemble new “facts” that can be used against Julian Assange.

In April, Assange was indicted by the Trump administration on 18 charges, including 17 for violation of the draconian Espionage Act, which carry a sentence of up to 175 years’ imprisonment. He is being detained under harsh conditions as a “flight risk” in London’s Belmarsh Prison until hearings begin on February 25 on whether the United Kingdom will extradite him to the US to face a show trial.

On May 9, Manning was released from her first detention—after the term of the grand jury had expired—only to be immediately rearrested on May 16 and served a subpoena to appear before a new grand jury. For a second time, Manning refused to answer any questions. She stated: “This grand jury seeks to undermine the integrity of public discourse with the aim of punishing those who expose any serious, ongoing, and systemic abuses of power by this government.”

The vindictive treatment of Chelsea Manning has included “administrative segregation”—a prison euphemism for solitary confinement—and being fined an unprecedented $1,000 per day for refusing to answer grand jury questions. By the time she might be released in October 2020, she will be left owing the US government as much as $440,000. Convicted antiwar activist Jeremy Hammond, who provided intelligence documents to WikiLeaks, has been also brought to the same jail as Manning in order to coerce him into giving false testimony.

The persecution of Assange, Manning and Hammond is intended to intimidate anyone who seeks to serve the working class majority by bringing into the light of day the criminality and abuses of the ruling capitalist class and its state apparatus. They are victims and prisoners of class war, which is why the fight to win their freedom cannot be achieved by appeals to the very organizations persecuting them, but only by mobilizing the immense strength of the American and international working class.

Manning herself has passed through immense political experiences. In January 2018, she decided to run in the Democratic Party primaries for a US Senate seat in Maryland, finishing second out of eight candidates who competed for the nomination. By the end of her campaign, she had drawn important conclusions about the prospects for changing society through the existing parties and institutions.

Manning said in a video address to an audience at the Sydney Opera House on September 2018: “After spending hours and hours knocking on doors and making phone calls, I’m convinced that the change people truly need goes beyond what our corrupt two-party system is willing to offer.”

Manning’s attitude toward the entire political establishment is the reason why the corporatist and militarist Democratic Party, trade union apparatus and “liberal” media have refused to give her any support since she was re-imprisoned. Her refusal to support the Democratic Party and her principled refusal to testify against Julian Assange are also why she has been largely abandoned by the middle-class pseudo-left in the US, which is preoccupied with promoting illusions in the campaign of establishment figures like Bernie Sanders.

The immediate danger that US imperialism will launch a murderous assault on Iran, along with the descent toward war against nuclear-armed China and Russia, poses starkly the necessity for the development of a worldwide antiwar movement fighting to end the cause of war—the capitalist profit system and its division of the world into rival nation-states.

An international antiwar movement can and must fight for the freedom of Assange, Manning and all others who have put their lives on the line to let the population know the truth. A political and industrial campaign must be developed in every workplace, neighborhood, university and school demanding their immediate release.

The fight against war and in defense of Assange and Manning is inseparable from all the struggles of the working class for its fundamental democratic and social rights. Around the world, millions of workers have entered into the first stages of monumental battles.

In the US, the first major national strike by General Motors autoworkers in 30 years is only the harbinger of a historic eruption of class struggle against decades of ever worsening social inequality, poverty and oppression under capitalism.

This upsurge of the working class will provide the social basis for the fight to free Assange, Manning and all other class war prisoners. As they enter into discussions with workers in struggle all over the world, the World Socialist Web Site and the Socialist Equality Parties will seek to raise the broadest possible awareness of the fight to free Chelsea Manning and Julian Assange.