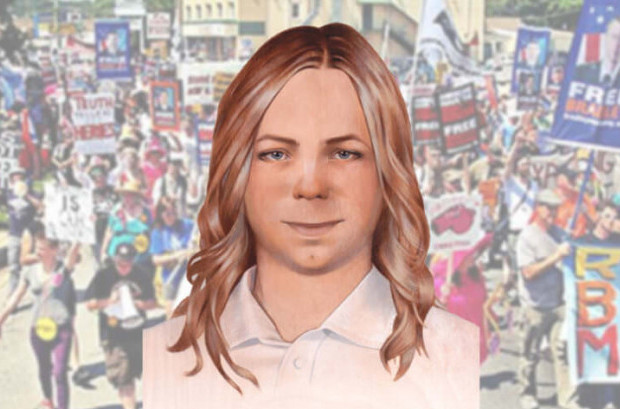 Chelsea Manning, the Army intelligence analyst jailed for her 2010 disclosure of classified information, is free today. Manning will leave Fort Leavenworth after having been imprisoned for 7 years. She was supposed to serve 35, the longest sentence ever handed down to a whistleblower in the United States, but after an impassioned activist campaign calling for her release President Obama commuted her sentence before leaving office.

“This fantastic news goes a long way to making amends for the brutal treatment Chelsea was illegally subjected to while awaiting trial. It’s tragic that Chelsea had to spend 7 years imprisoned for releasing documents that should never have been classified in the first place, and were clearly in the public interest,” declared Chelsea Manning Support Network co-founder Jeff Paterson. “All of us who worked on Chelsea’s behalf are overjoyed. It feels unreal.”

“I feel fantastic. Getting the news that President Obama had commuted Chelsea’s sentence was overwhelming and filled me with joy” said Nancy Hollander, who was the lead attorney for Manning’s appeal. “I wished I could have immediately hugged Chelsea. She has served a long and difficult sentence and her release is long overdue. It will be great to see her as a free woman.”

WHAT WAS IN MANNING’S LEAKS?

In a just world, Chelsea Manning wouldn’t have been jailed and tortured, but celebrated as a hero for alerting the public to the crimes of its government. Atop the list of Manning’s important revelations is the “Collateral Murder” video, one of the most infamous WikiLeaks releases ever. The footage shows a series of US Army air strikes in Baghdad from 2007. These attacks killed 12 people, including a Reuters photojournalist and his driver. The video reveals that soldiers fired upon innocent Iraqis who showed up to help after the first round of civilians had been hit. You can hear two of the soldiers talking on the tape. “Hahaha. I hit ’em,” one exclaims. “Oh yeah, look at those dead bastards,” the other replies.

While the “Collateral Murder” tape was at least reported on by the mainstream media, many other important aspects of the leaks weren’t. Here’s a partial list of what Manning tried to inform us of:

While many Americans are aware of the “Arab Spring,” most probably don’t know that the whole thing may have been kicked off via one of Manning’s leaks. Details of the corruption that enveloped Ben Ali’s government in Tunisia were leaked by Manning. Many believe that these revelations served as the catalyst that led to Tunisians overthrowing the Ali government and, ultimately, sparked the Arab Spring in 2011. 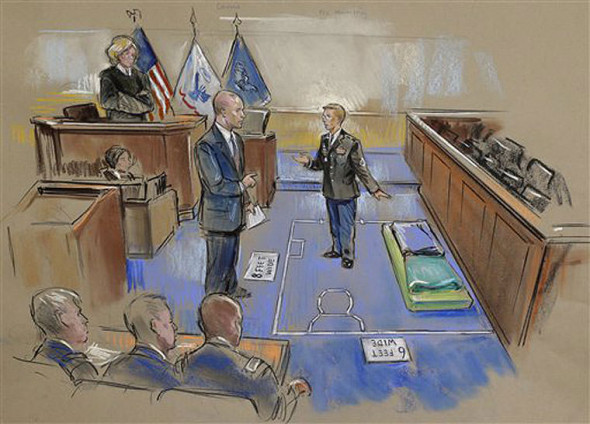 THE TORTURE OF CHELSEA MANNING

After she was arrested, Manning was jailed alone for 23 hours a day over an 11-month period. Juan Mendez, the UN special rapporteur on torture, formally accused the US government of torturing Manning via solitary confinement. Mendez’ final conclusions declared that, “solitary confinement is a harsh measure which may cause serious psychological and physiological adverse effects on individuals regardless of their specific conditions.”

A couple of months after writing this piece, Manning attempted suicide and was disciplined for her actions by being thrown back into solitary confinement for two weeks.

While it’s probably not surprising that many Republicans opposed Manning’s actions and supported her imprisonment, the number of liberals who were fine with it was striking from the very beginning.

Despite the worldwide impact of her leaks, Alyssa Rosenberg, formerly a blogger at the Center for American Progress and now at the Washington Post, dismissed Manning for having “pretty serious emotional problems” and not being “a particularly effective whistleblower.”

MSNBC’s Joy Reid speculated that Manning was simply “seeking anarchy as a salve” for her “own personal, psychological torment.” As for the brutal treatment of Manning in jail, Reid tweeted that “prison (ahem) is meant to be unpleasant” and justified solitary confinement by pointing out Manning was being held for “alleged espionage.”

This kind of liberal reaction remained strong until the very end. After Obama announced that he was commuting Manning’s sentence, a number of Senate Democrats began to distance themselves from the decision. Sen. Mark Warner said it was the “wrong signal.” Sen. Gary Peters said Obama’s choice was “disappointing” and “dead wrong.”

From the very beginning those pushing for Manning’s release fought an uphill battle with no significant support from lawmakers. On the contrary, politicians from both sides of the aisle stood as an impediment to Manning’s freedom. 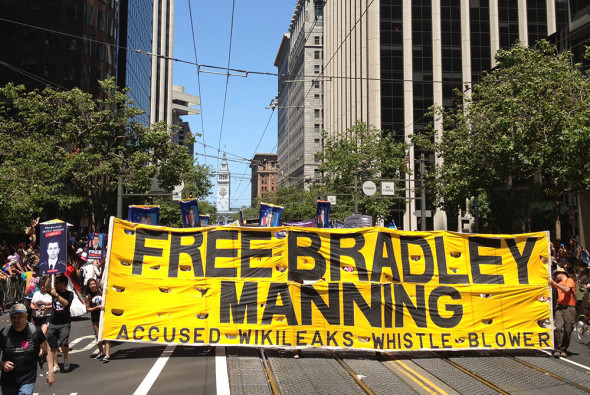 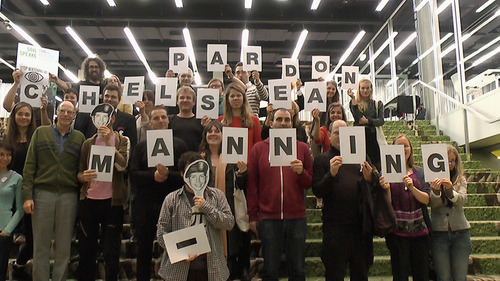 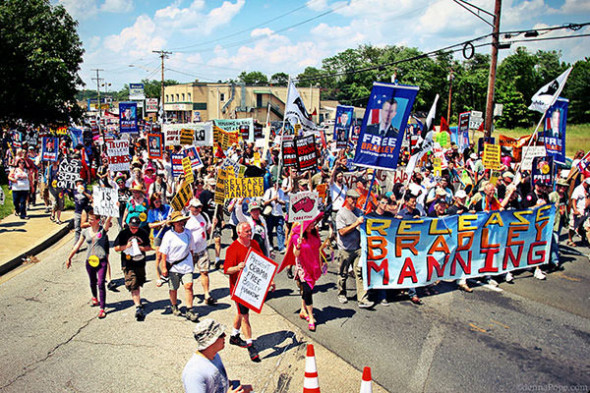 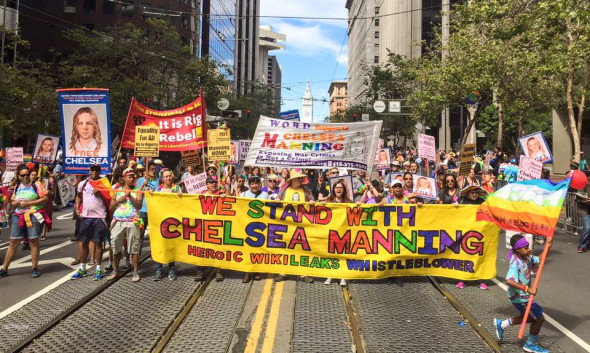 HOW MANNING WAS FREED

It wasn’t so long ago that the commutation of Chelsea Manning’s sentence seemed completely impossible. After all, President Obama wielded the Espionage Act more than all his predecessors combined and cracked down on whistleblowers with unprecedented zeal.

In the end, a group of diverse activists and everyday citizens were able to obtain freedom for one of the most important American political prisoners of all time. Manning’s case was never all that well known to the public, as the mainstream media never showed much interest in her leaks or ongoing legal battle. It was up to government transparency and free speech advocates, military veterans, LGBTQ activists, anti-war organizers, a small number of journalists and a group of determined lawyers to raise public awareness of the situation.

“Today could not have been possible without the support from Courage to Resist, the Manning Support Network, and those that I affectionately call the Truth Brigade,” said David Coombs, the lead defense attorney at Manning’s court martial. “The constant support from these groups and others provided Manning with a legal defense, and resulted in her subsequent commutation.  I am so happy that this day has come, and look forward to seeing Chelsea as a free woman.”

Reflecting on the fight, Rainey Reitman, of the Chelsea Manning Support Network, wrote “It boggles the mind to think how far we came . . . In some ways, we were squaring off against the United States government itself, with its seemingly infinite resources. As the trial dragged on for years, we had to fundraise for every dollar to cover legal fees, buy supplies to send mailings, and pay a pittance to a small group of overworked, dedicated, wonderful organizers who used every scrap of bravery and creativity imaginable to advance the public’s knowledge of Chelsea Manning.” The Support Network first started pushing for President Obama to pardon Manning in 2013.

The Chelsea Manning Support Network was created shortly after Chelsea was arrested. It covered all the legal fees connected to her pretrial hearing and court martial trial. It also raised significant sums of money to assist in her appeal. By the end of the campaign, over 30,000 individuals donated $2 million to Chelsea’s defense. As of today, over $140,000 has been contributed to the Chelsea Manning Welcome Home Fund, hosted by her attorney Chase Strangio. That money will be Chelsea’s to start her life anew.

Courage to Resist served as the network’s fiscal manager for almost 7 years. “I continue to be so impressed by the leadership of Courage to Resist in building a broad movement to free Chelsea Manning,” said Gerry Condon, of the Veterans For Peace Board of Directors. “I am also thankful to the many members of Veterans For Peace who stood solidly with Private Manning, barely blinking an eye when Bradley became Chelsea. We wish her the best possible life. We will continue to support war resisters and whistleblowers.”

Activists drew attention to the cause through actions and protest. Hundreds of rallies were held throughout the world, ads were taken out in major papers, billboards were rented near her trial and prison, contingents marched in solidarity with Manning during pride parades around the world, and supporters packed the military court room, even as the court martial proceedings dragged on for months.

Shortly after Manning attempted suicide in 2016, groups dropped off 115,000 petition signatures at Secretary of Army Eric Fanning’s office condemning the new round of charges that had been leveled against Manning.

Organizing clearly pushed Obama to his decision. This is not only a massive victory for Manning and her supporters, it’s also an important symbol of what is possible if people join together and demand accountability from their elected officials.

“Knowing that Chelsea, then Bradley, had been locked up for leaking the ‘Collateral Murder’ video and the Iraq War Logs, to Wikileaks, provided the moral outrage needed by me and so many people to prioritize winning Chelsea’s freedom,” said Courage to Resist’s Bob Meola. “We concentrated on educating the public about the mistreatment of the truth-teller hero with a conscience, who shared the knowledge, that the people of the U.S.A. and of the rest of the world had a right to know, about U.S. war crimes. We never gave up building the movement and spreading the message to ‘Free Chelsea Manning.’ I look forward to Chelsea’s return to freedom.”

Manning released a statement through her lawyers. “Freedom used to be something that I dreamed of but never allowed myself to fully imagine,” she said. “Now, freedom is something that I will again experience with friends and loved ones after nearly seven years of bars and cement, of periods of solitary confinement, and of my health care and autonomy restricted, including through routinely forced haircuts. I am forever grateful to the people who kept me alive, President Obama, my legal team and countless supporters . . . I watched the world change from inside prison walls and through the letters that I have received from veterans, trans young people, parents, politicians and artists. My spirits were lifted in dark times, reading of their support, sharing in their triumphs, and helping them through challenges of their own. I hope to take the lessons that I have learned, the love that I have been given, and the hope that I have to work toward making life better for others.”

Manning’s whistleblowing exposed the corruption of our governments and the brutality of our wars. Thanks to Chelsea we have a clearer picture of what needs to be done. Manning also showed us how destructive the over-classification of public documents is in this country. “Any historian worth his salt would warn us that such over-classification is a leading cause of national amnesia and repetitive war disorder,” wrote attorney Chase Madar. “If a society like ours doesn’t know its own history, it becomes the great power equivalent of an itinerant amnesiac, not knowing what it did yesterday or where it will end up tomorrow.”

“The most positive thing I will remember President Obama for is the release of Chelsea Manning. On the day she was sentenced it seemed like she would spend a lifetime in prison. I am looking forward to celebrating her release when it really occurs. That will be a good day for justice,” stated Kevin Zeese, a Support Network organizer.

The political landscape was much different when Manning went to jail. She is now being released into a country run by Donald Trump, a man whose entire political career appears to be a massive conflict of interest. We need whistleblowers like Chelsea more than we ever have before.

“Thank you for what you did for everyone, Chelsea. Stay strong a while longer!”   – Edward Snowden