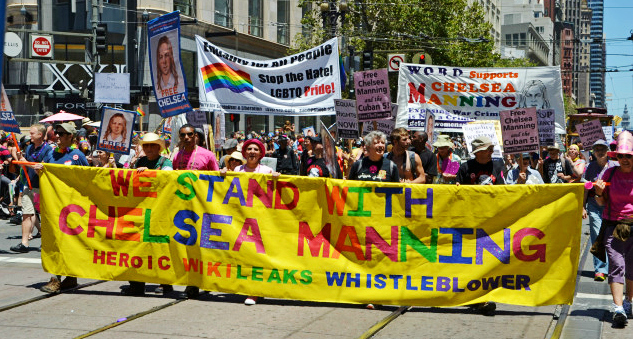 First Look Media’s Press Freedom Litigation Fund will match $50,000 in donations to the campaign along with Glenn Greenwald, Intercept co-founder and journalist, who will personally match $10,000 for the initiative.

“Being in prison while trying to figure out how I will pay for my legal appeal has been a great source of stress and anxiety. I’m so honored that a new campaign is supporting me in my effort to vindicate my legal rights, and I am truly grateful to anyone who is helping.”

“Nearly two years ago today, Chelsea Manning was sentenced to 35 years behind bars for a heroic act of truth-telling to protect innocent civilians. We are proud and honored to represent Chelsea Manning in this historic appeal with the potential to order a new trial or sentencing, reduce her sentence or reverse her convictions.

“If this case stands—along with other recent cases—anyone who ever leaks a single page of classified information runs the risk of prosecution under the Espionage Act. That Act was meant to punish spies and saboteurs, people who act against the United States. It was never meant to prosecute whistleblowers and this case presents a disastrous precedent that needs to be overturned. A healthy, free society needs brave individuals to hold the government accountable for its actions at home and abroad.

“The issues on appeal include the horrific way that Chelsea was treated, subjected to months of solitary confinement and harsh restrictions that were outrageous, punitive and unnecessary. She was denied her constitutional right to a speedy trial and experienced a wholesale lack of due process.

“My law partner, Vince Ward, Chelsea’s detailed appellate counsel, Cpt David Hammond, and I are working our way through the longest written record in military history and take on this fight willingly. Chelsea has the right to have someone stand between her and the awesome power of her own government when all that power is directed at her. Vince and my work for Chelsea is sustained by thousands of her supporters who stand with her to challenge our justice system to honor the rights of all people who put themselves at grave personal risk to protect and defend others.”

For interviews with attorney Nancy Hollander, please contact Trevor Fitzgibbon at 202.406.0646or trevor@fitzgibbonmedia.com. For more information or to contribute, please visit: https://freedom.press/chelsea.

Donate and spread the word.