Chelsea Manning being kept in jail for refusing to testify in the Julian Assange investigation is a sure sign that the Department of Justice is seeking additional charges against Assange. If the indictment that was made public was the end of the grand jury, Manning would be released. The first indictment was weak. It did not even make a prima facie case demonstrating the charges alleged.

Prosecutors seem to need Manning’s testimony. I have been following and working on Manning’s case since she was first arrested. If they need Manning they are going to be disappointed. Common Dreams reports: “While I miss home, they can continue to hold me in jail, with all the harmful consequences that brings. I will not give up,” she said.

A member of Manning’s legal team, Moira Meltzer-Cohen, said the subpoena and prolonged detainment amounted to grand jury abuse. “It is improper for a prosecutor to use the grand jury to prepare for trial. As pointed out in Ms. Manning’s motions and appeals, since her testimony is not necessary to the grand jury’s investigation, the likely purpose for her subpoena is to help the prosecutor preview and undermine her potential testimony as a defense witness for a pending trial.”

Once again Manning is showing principled courage for which people should be grateful. KZ

Whistleblower Chelsea Manning’s appeal was rejected by the 4th district court of appeals. Manning was jailed when she refused to testify in the grand jury against Julian Assange. She has been incarcerated for 45 days but according to her Twitter account @xychelsea:

“I don’t have anything to contribute to this, or any other grand jury … I will not give up,” she says.

Here is the statement teleased by her lawyers and herself: 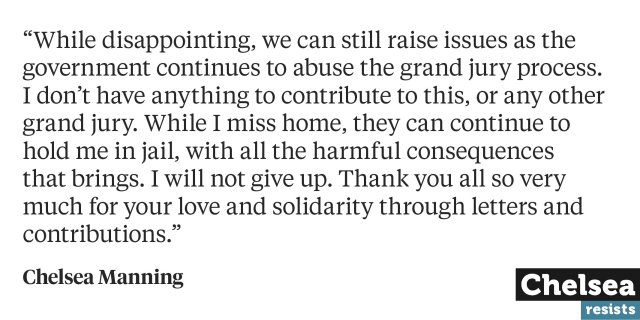 Chelsea Manning is well known for the Collateral Murder video published by Wikileaks seen here. She also disclosed thousands of diplomatic cables through Wikileaks. She spent 7 years in prison after being convicted under the ancient espionage act. Her sentence was commuted by Barrack Obama in 2017.

The question being raised is if the only charge against Assange has been revealed, why is Manning still in jail? Assange was arrested 11 days ago in the Ecuadorian embassy in London after the ambassador opened the doors and let police in. Immediately after Assange’s arrest, the US issued an extradition warrant.

Manning already suffered plenty while in prison as she was tortured. According to the article in the Guardian seen here:

“Juan Mendez has completed a 14-month investigation into the treatment of Manning since the soldier’s arrest at a US military base in May 2010. He concludes that the US military was at least culpable of cruel and inhumane treatment in keeping Manning locked up alone for 23 hours a day over an 11-month period in conditions that he also found might have constituted torture.“

According to the law, the US can only hold Manning for 18 months under the contempt of court charge. In the mean time, the right to free speech and free press continues to be under attack.