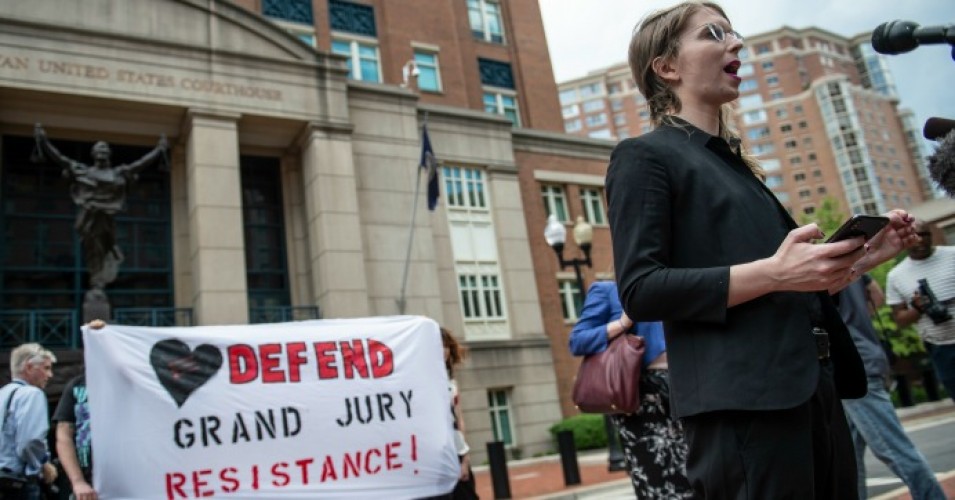 Above photo: Former military intelligence analyst Chelsea Manning speaks to the press ahead of a Grand Jury appearance about WikiLeaks, in Alexandria, Virginia, on May 16, 2019. (Photo: Eric Baradat/AFP via Getty Images)

“No matter how much you punish me, I will remain confident in my decision,” said the whistleblower.

Lawyers for Army whistleblower Chelsea Manning on Wednesday filed a motion for her release, saying her continued incarceration for refusing to testify before a federal grand jury is unlawful.

The motion, filed in the Alexandria, Virginia-based federal district court for the eastern district of Virginia, says that Manning’s “incarceration is not serving its only permissible purpose”—to coerce her testimony. Rather, the motion argues, the detention is clearly punitive.

Manning has been held in contempt of court and locked away at the Alexandria Detention Center nearly continuously since March 2019. She may be held as long as 18 months unless she agrees to testify to a grand jury about WikiLeaks and its founder, Julian Assange, who remains at a London prison as the U.S. government seeks his extradition.

The detention is also economically costly. Manning is being fined $1000 per day, which her supporters have panned as an “outrageous” escalation of the U.S. government’s ongoing harassment of her.

Manning’s attorney Moira Meltzer-Cohen explained how the continued detention is out of legal bounds.

“A witness who refuses to cooperate with a grand jury subpoena may be held in contempt of court, and fined or incarcerated,” she said in a statement. “The only permissible purpose for sanctions under the civil contempt statute is to coerce a witness to comply with the subpoena. If compliance is impossible, either because the grand jury is no longer in existence, or because the witness is incoercible, then confinement has been transformed from a coercive into a punitive sanction, and thus is in violation of the law.”

Manning has been consistent in her refusal to testify.

“Over the last decade Chelsea Manning has shown unwavering resolve in the face of censure, punishment, and even threats of violence,” says the new motion.  In “light of her history, it should surprise nobody to find that she has the courage of her convictions.”

“She reiterated her refusal to cooperate with the grand jury process before this court, and has now reiterated that refusal every day for more than 11 months,” the motion adds. “There is no reason to believe she will at this late date experience a change of heart; there is a profusion of evidence that she will not.”

The attorneys included as evidence United Nations Special Rapporteur on Torture Nils Melzer’s November 2019 letter to the U.S. government expressing his concern about Manning’s incarceration, “particularly given the history of her previous conviction and ill-treatment in detention.”

Melzer said that Manning’s current detention may amount to “an open-ended, progressively severe measure of coercion fulfilling all the constitutive elements of torture or other cruel, inhuman or degrading treatment or punishment.”

Manning’s lawyers also included in their motion a report from a clinical expert on Manning’s personality that described her “willingness to endure social disapproval as well as formal punishments” to pursue her values.

“No realistic possibility remains that continued confinement or other sanctions will bring about Ms. Manning’s testimony,” says the motion. “Further confinement cannot attain its stated coercive purpose, and therefore will be not simply futile, but impermissibly punitive.

Manning confirmed her stance against her incarceration in a statement Wednesday.

“No matter how much you punish me, I will remain confident in my decision,” she said. “I have been separated from my loved ones, deprived of sunlight, and could not even attend my mother’s funeral. It is easier to endure these hardships now than to cooperate to win back some comfort, and live the rest of my life knowing that I acted out of self interest and not principle.”