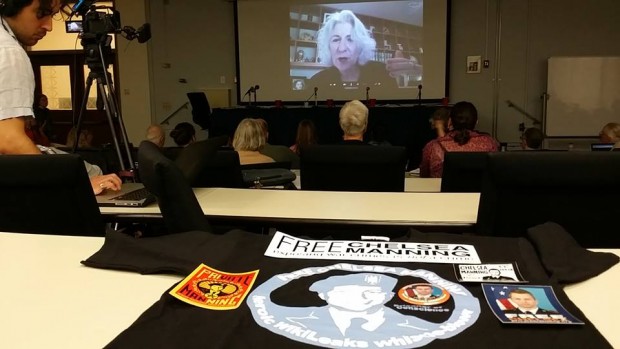 Above: WASHINGTON, DC – AUGUST 21:  Protesters demonstrate in support of Chelsea Manning on August 21, 2013 in front of the White House in Washington, DC. Manning was sentenced to 35 years in prison for leaking hundreds of thousands of classified documents to the anti-secrecy group WikiLeaks.  (Photo by T.J. Kirkpatrick/Getty Images).

The Espionage Act must stopping being misused “if we’re to have any freedom of speech, if the First Amendment is to exist at all. We cannot prosecute people who tell us what our government is doing and remain a free society.”

At an event at Georgetown Law Center last night, Chelsea Manning’s new lawyers provided a preview of what they expect to happen during the appeals process in her military case.

Nancy Hollander, a defense attorney who has defended various individuals accused of terrorism or national security offenses, and Vincent Ward, a former JAG lawyer with a background in the military justice system, both said they were at the “beginnings” of the appeal. They have not seen the record of Manning’s trial yet, however, they wanted to offer the public, especially Manning supporters, the opportunity to hear what their thoughts are on the legal process which lies ahead.

The “misuse of the Espionage Act,” the over-classification of information, the selective prosecution of individuals by the government for leaks, “unlawful command influence,” “unlawful pretrial punishment,” and violations of “speedy trial rights” will all be issues raised during the appeal.

Hollander said Manning’s convictions for violating the Espionage Act set a “dangerous precedent.” She added, “If this case stands, along with some other recent cases, whoever leaks a single page of classified information or even non-classified information runs the risk of prosecution under this act.”

Manning was found guilty of five Espionage Act offenses, which is quite significant in the war on leaks and whistleblowers that has been waged by President Barack Obama’s administration.

“The Espionage Act was meant to punish spies and saboteurs and people who steal things from the United States and take them to foreign countries to benefit that country or to specifically hurt the United States. It was never meant for whistleblowers. It should never be used in these kinds of cases,” she said.

“It is frightening that the Espionage Act has essentially become a strict liability crime, that intent required is the intent to disclose and we simply cannot let that continue.” And, “the lack of criminal intent is frankly horrifying to me as a lawyer, that Chelsea was convicted and is going to spend 35 years in jail without any burden on the government whatsoever to prove that she intended or had reason to believe that this disclosure would harm the United States or advantage a foreign government.”

Hollander drew attention to the over-classification of what the government calls “national security information,” even noting that at Guantanamo Bay prisoners’ “thoughts, perceptions and observations” (including of their own torture) have been classified by the government.

Hollander even argued that by calling more and more items “national security” information and engaging in over-classification the government was making the “reach of the Espionage Act” even greater. It was also lowering its burden to prove someone violated the law.

“The Espionage Act is a draconian act. It has hardly ever been used in the history of this country. And it’s been used more by this administration than it has altogether. It has to stop if we’re to have any freedom of speech, if the First Amendment is to exist at all,” she further stated. “We cannot prosecute people who tell us what our government is doing and remain a free society.”

Hollander suggested that Manning had been punished enough already. “The months of solitary confinement were outrageous. They were unnecessary. They were completely punitive. No other country in the world uses solitary confinement exactly the we do; certainly, none of the European countries,” and then she stated, “It destroys the mind. It destroys the body and there was no excuse for it in this case.”

Ward, during his presentation, called attention to the amount of time that Manning spent in detention prior to even being charged. “She spent not days but months and months and months waiting for a charge sheet while the military tried to figure out what to charge [her] with.”

He argued that Article 10, a part of the Uniform Code of Military Justice (UCMJ), grants soldiers rights that are “greater than the Sixth Amendment when it comes to speedy trial.”

In regards to “unlawful command influence,” he said it is “very controversial” that a commander has the level of control that he typically has over a case. There is no prosecutorial discretion because that belongs to one military commander. So, the appeal would go to the core of the military system itself.

Manning is currently imprisoned at Fort Leavenworth in Kansas. She was credited with 1,162 days of pretrial confinement credit and 112 days of credit for “unlawful pretrial punishment” by the military judge during her court martial.

Technically, both Hollander and Ward cannot take action on the case yet. Major General Jeffrey Buchanan, the Convening Authority in this case, is still going through the process of acting on the record of trial and responding to the decision of the court. The Convening Authority can choose to overturn or change the sentence and, when he is done, the case will be passed on for appellate review.

“We have a very long road to go and an uphill battle,” Hollander told supporters of Manning. “This appeal will take a long time. We have a bunch of courts to get through. We have two appellate courts. We have the Supreme Court of the United States. We have a possible habeas [case]. We will stay with this case until there are no more courts and nowhere else to go on behalf of Chelsea.”

In her more than thirty years of experience practicing as a defense lawyer, Hollander recalled giving speeches about the First Amendment or the Fourth Amendment and recognizing each time that rights for Americans were being chipped away. But one right the government has not managed to whittle away is the right to be represented by a lawyer.

“Chelsea has the right to have a lawyer stand between her and the awesome power of her own government and that government is projecting everything it has against her,” she concluded. “Vincent and I will stand between the government and Chelsea. And they’ll have to get past us to get to her. That’s the stand we’ll take.”

Update: Army General Upholds Chelsea Manning’s 35-Year Sentence: “It’s no surprise that the convening authority denied this request. We anticipated it, and we’re prepared to go forward with the appeal,” said Nancy Hollander, Manning’s recently selected appeals lawyer. “We did not expect any relief from the general. But we do believe that we will go forward with the appeal, and that was always what we intended to do.”