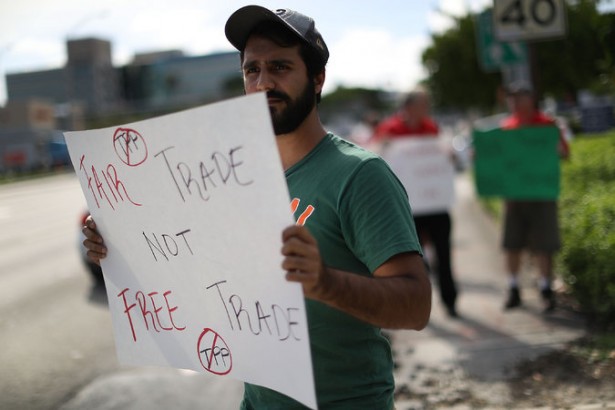 Above Photo: The New York Times wants you to think that people like him are in the minority–in part by pretending that people for fair trade are against “trade.” (photo: Joe Raedle/Getty)

Dean Baker (FAIR.org, 9/23/16) was rightly skeptical of a New York Times article (“Who Hates Free Trade Treaties? Surprisingly, Not Voters,” 9/21/16) reporting that polling showed support for trade agreements, noting that it used the concepts of “trade,” “free trade” and “trade agreements” interchangeably. “As everyone knows, except apparently the people who work for the New York Times, these are not the same thing,” Baker pointed out.

But beyond the argumentation in the piece, the factual claims about public opinion that the arguments were based on were themselves dubious. The story’s author, Times reporter Jackie Calmes, wrote that while you might assume from the stances of both major candidates that “voters are overwhelmingly opposed” to the pending Trans-Pacific Partnership trade pact, “national polls continue to show that Americans either narrowly favor international trade generally, and the so-called TPP specifically, or are split.”

Exhibit A for this assertion:

A survey last month by the nonpartisan Pew Research Center found that Americans by 50 to 42 percent said trade agreements had been “a good thing” for the United States. By a narrower 40 to 35 percent, they said the same of the Pacific pact, which would phase out tariffs and set commercial rules between the United States and nations from Canada and Japan to Australia, Vietnam and Chile.

Overwhelming  opposition to trade agreements? No, but on each question, voters tipped negative—the opposite of the figures Calmes reported. The difference is that while Pew highlighted the findings for registered voters, Calmes cited numbers for all Americans—voters and non-voters—which were available in an appendix to the report.

Why would she do that, given that the point of her story was to look at the impact of trade opinions on the election? Because voter polling didn’t give her the numbers she wanted, evidently.

As it happens, the same question about TPP was asked of all Americans more recently—in a YouGov poll for The Economist (9/10–13/16). In that poll, 34 percent said it would be a bad thing, 27 percent good; registered voters were even more opposed, 40–25 percent. Usually you want to give readers the most recent poll findings—but the New York Times chose to go a different way.

Similar cherry-picking was evident with Calmes’ summary of a poll from an anti-TPP group:

The pollster for the liberal group Public Citizen, which is among the most active opponents of trade agreements, recently found that the public comes to the debate over TPP from a position “bordering on neutrality,” with Republicans very negative and Democrats more positive. A plurality of all Americans favored past agreements, it said.

But when you look at the actual numbers from the report, you find that when people were asked about TPP specifically, a plurality opposed it, 38–35 percent. When asked to rate their feelings about TPP, 27 percent gave unfavorable ratings, while only 18 percent were favorable. The polling also found that people found anti-TPP arguments much more convincing than pro-TPP arguments (which suggests, I would note, that they haven’t been exposed to as many critiques of TPP in media accounts).

Again, why didn’t Calmes use these numbers? Because, I would suggest, they didn’t point in the direction she wanted them to.

The reporter went on to rattle off some pro-“trade” poll findings: 58 percent telling Gallup that trade was an “economic opportunity,” not a “threat”; 55 percent in anNBC News poll agreeing that trade was good “because it opens up new markets and we cannot avoid the fact that it is a global economy”; and, “perhaps the most counterintuitive finding,” 75 percent of respondents saying to the Washington Post/ABC News poll that they wanted a president who “supports trade agreements between the United States and other countries.”

Calmes concluded her story by suggesting that either Hillary Clinton or Donald Trump would likely be more supportive of the TPP than they have been on the campaign trail, citing Atlanta Mayor Kasim Reed: “People who run for office often campaign against trade, but people who become president of the United States end up supporting trade.”

If that happens, the New York Times will have paved the way for such a flip-flop—having assured us that that’s what we really want anyway.