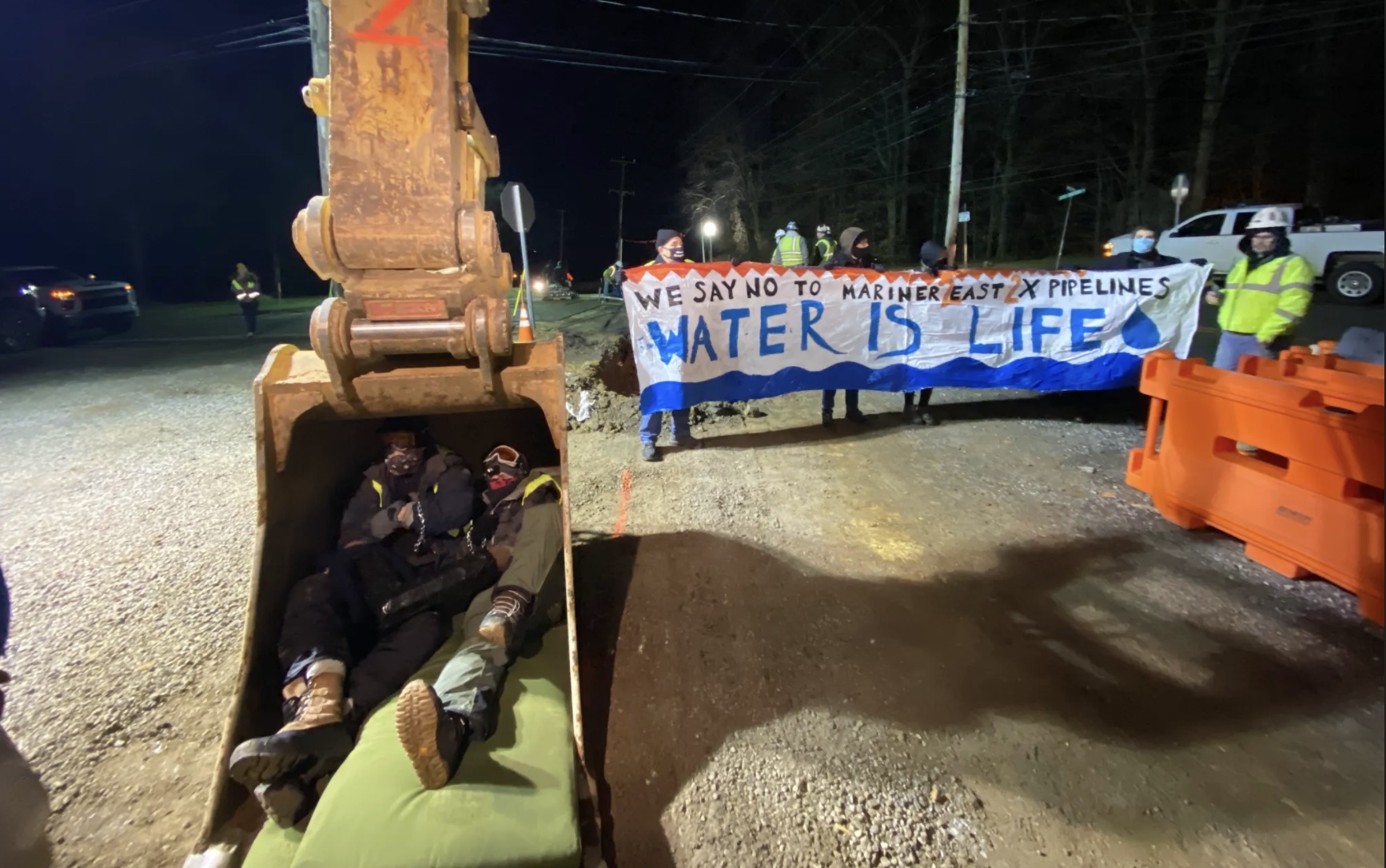 This pipeline project is slated to take natural gas liquids out of the US to overseas markets.

Before reaching the Marcus Hook shipping port, the line traverses 350 miles of personal and public property, 1,227 stream crossings, 570 wetland crossings, and 11 pond crossings; 337 of these crossings disturb what DEP refers to as “special protection” waters.

In addition, there are 129 exceptional value wetlands being crossed, including Marsh Creek Lake in Marsh Creek State Park, a drinking water source for 1.75 million people.

“I decided to take direct action because I do not consent to our government allowing a serial offender that harms the waters of our local reservoir,” said Christine “PK” Digiulio. “My mother has lymphoma, and tests showed she had shiga toxin in her system, and the PA Department of Health requested we tested our well water, which showed extreme bacteria in our well, and my family suspects this is in direct correlation to pipeline construction, and the DOH went radio silent after we proposed an investigation. If our state agencies won’t protect the people, the people must act to protect ourselves.”

“Without water, life is impossible,” said Connor Young. “Mariner East is the greatest threat to water in this area. This pipeline cuts my community in half and puts the lives of my friends and family under attack. Sunoco/ETP has already put my body on the line without my consent. The only difference here is that I chose the risk this time to protect my friends and family.”

In October 2021, Attorney General Shapiro announced 48 criminal charges and 1 felony against Energy Transfer Partners/Sunoco for illegally releasing industrial waste at 22 sites in 11 different counties across Pennsylvania, for polluting water in residents’ homes, and for the forced closure of Chester County’s 535-acre Marsh Creek Lake in Marsh Creek State Park, due to a 28,000-gallon fluid spill into the recreational lake.  [Read more here.]

Although the company has yet to clean up the spill, they paid $4 million to the Department of Conservation and Natural Resources, a pittance compared to the $2.5 billion+ in revenue the corporation sees to pull in from the project, said the Coalition.  [Read more here.]

“We demand that before the state continues to allow any further construction, that the families who currently have contamination from the Mariner East pipeline construction and the spill in Marsh Creek Lake both be fully remediated,” said Troy Turner of Sinking Spring, Berks County where local schools have been negatively impacted by this pipeline. “We hold both Governor Wolf and Attorney General Josh Shapiro directly responsible for choosing a fossil fuel billionaire’s timeline over Pennsylvanians that they are accountable to.”

Families from across the 350 miles of the pipeline route came to support this action. Michael Bagdes-Canning, Vice President of the Cherry Valley Borough Council in Butler County drove nearly 300 miles to support the protest, saying “The liquids traveling through the Mariner East Pipeline were extracted from communities in western Pennsylvania like mine. Fracking creates sacrifice zones. Near me, The Woodlands has been without water for over 11 years because of a failed fracking job by Rex Energy. Once a week up to 60 families go to a water bank to get 20 to 25 gallons of water per family. I came to stand in solidarity with my neighbors all along this pipeline.”

In Edgmont Township, Delaware County residents like the Tarr family still do not have any clean water to drink for two years now after the Mariner East HDD drilling process contaminated their well and aquifer by spreading the VOCs from an old Sunoco pipeline oil spill in the same vicinity.

The Better Path Coalition said the Mariner East Pipeline permits should have been pulled from DEP due to the Attorney General filing the criminal charges and certainly never approved more permits to now continue construction at Marsh Creek.