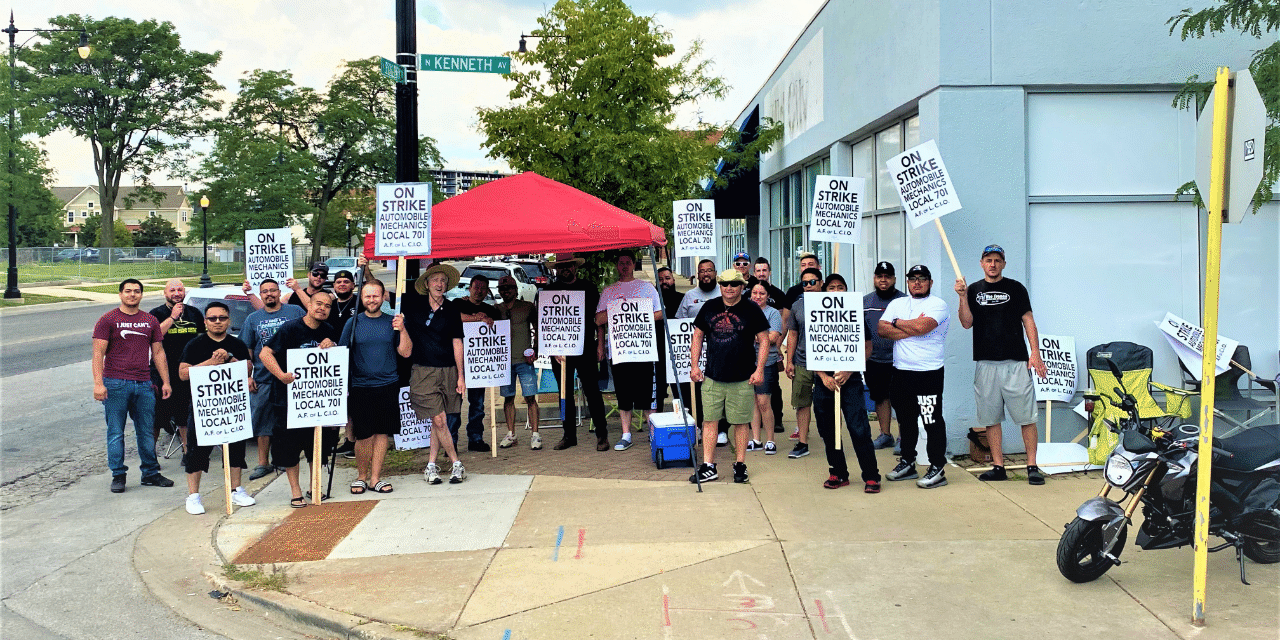 Chicago Area Mechanics Speak Out About Isolation Of Their Struggle

After more than three weeks on strike, mechanics in the Chicago area, members of the International Association of Machinists and Aerospace Workers (IAM) Local 701, are being kept in the dark about negotiations and isolated from their brothers and sisters in the same local and the wider working class as a whole.

The mechanics have shown their willingness to fight against the New Car Dealer Committee (NCDC) of Chicago and the car dealerships’ concession demands. On July 31, one day before the beginning of the strike, the mechanics voted down the NCDC’s contract proposal by 99 percent and voted by 97 percent to strike.

But throughout the past month, the IAM leadership has isolated the strike and worked on behalf of the NCDC as conscious strikebreakers to an even greater extent than during the last strike in 2017, which lasted for seven weeks. During that time, mechanics voted down the IAM’s contract proposal once before the union was able to push through a second deal. The union was ultimately able to force through a sellout by using strikebreaking tactics, negotiating side deals with dealerships that were not on strike, which took them out of the Standard Automotive Agreement bargaining pattern. This had the effect of undermining the unity of workers and weakening the strike.

IAM Local 701 is now using the same tactic in overdrive, negotiating what it refers to as the “Defector’s deal,” separately with dealerships not on strike. The union is signing these agreements without allowing the workers at these dealerships a chance to access the full language of the contract before it is signed.

A team of World Socialist Web Site reporters spoke to Hawk Ford journeyman mechanics, apprentices and semiskilled technicians in the Chicago suburb of Oak Lawn over the weekend to bring a message of support and unity from the international working class and to let workers tell their story to an international audience.

“The dealers want us to pay a little bit more out of our pocket for health care every year. So right now, we are paying $10 per week, and we have been for three years. But what I heard is that the other dealers [that are not on strike] are getting health care for free,” a journeyman mechanic told WSWS reporters.

“Not all of the dealerships are on strike right now. Basically, we want what the other dealerships already have. There was someone here earlier who is from one of the dealerships that signed the Defector’s deal, but he says they haven’t even seen what’s in it yet. But they have an idea of what they’re getting, so that’s why they signed it.”

The IAM has been putting forward a narrative that blames the NCDC for breaking up the strike because they signed the Defector’s deal. However, if workers read what the IAM writes about the Defector’s deal, it is clear that from the beginning that the deals were the result of a partnership between the union and the dealers working to end the strike quickly.

“It is isolating us because we are the only ones out here, but if the dealer is paying their workers fairly, then the union says they shouldn’t have to call them out on strike.”

Workers are receiving about one third of their weekly pay from the IAM while on strike. Although more than what many workers in other sectors of industry receive in strike pay, this is nonetheless a tactic that puts pressure on workers to accept contracts before they are allowed the chance to read them in full detail.

“It’s not so much about the pay,” one journeyman apprentice told the WSWS. “It’s about having no Most Favored Nations clause, bringing the other tiers of workers up to the same base pay as everyone else, and guaranteeing at least 36 hours per week in base pay for everyone.

“The dealers want the ability to reduce our pay based on productivity rather than pay us for how many hours we are at work, and that’s not going to fly with us. The dealers also want the ability to add whatever terms they want into the contract whenever they want, which would bypass negotiations every four years—that’s the Most Favored Nations Clause.”

“We can’t even control the flow of work coming in. December is our slowest month and some of us only book 20 hours of work every week,” another journeyman added. “If the dealers are allowed to reduce our pay based on productivity, then that could mean we’ll only get paid for 20 hours some weeks.”

The mechanics told reporters that the costs of the tools that they need for their work are usually paid for by the workers themselves out of pocket, which does not factor into their pay rates. “There’s the cost of school that a lot of us are still paying for. There’s the toolbox itself, and then the tools that you have to pay for. If you need a special tool or if you lose one, then you have to go out and get it yourself. If you need a new laptop for the job, it’s easier to just go out and get the latest one yourself rather than wait for the dealership to get it. Now, there are programs that we have to download onto computers, especially with the new electric vehicles coming out, which we’re already seeing come into the shops.”

“People at McDonald’s make more than me,” Ronnie, a semiskilled tech, told the WSWS. He is paid thirteen dollars an hour for his work, which is essential for keeping cars running smoothly. “I’m semiskilled, which is under apprentice. I do brakes and alignment and fluid flushes. Back in 2017, there were 129 dealers that had mechanics on strike. Now it’s roughly 40, because of the Defector’s deals [and earlier side deals in 2017]. It hurts morale and it doesn’t help. We get no details [on the Defector’s deals]. The hearsay is the raise is supposedly fifty cents, to $17.50.

“We had a 99 percent strike vote. The NCDC doesn’t want to talk. More than half of the dealers have mechanics back to work. Dealership owners could leave the NCDC, and the IAM is pretty lock-tight about the Defector’s deals.”

On the IAM Local 701 Facebook page, which has for the most part kept workers in the dark about negotiations, several comments on posts have tried to persuade mechanics to find jobs at dealers that have already signed the Defector’s deal, in other words, encouraging fellow workers to scab on themselves. The IAM has so far not done anything to expose these posts, denounce them, or otherwise call for unity against strikebreaking.

The facts indicate that both the NCDC and the IAM worked out a strategy to sign separate agreements with individual dealerships to undermine the strike. These deals, which have been imposed without workers having the full details or a chance to ratify, are illegitimate and bogus and must be rejected with contempt.

As it was in the 2017 strike, mechanics and technicians are very concerned about losing guaranteed weekly base rate pay that they rely on to support themselves and their families. The IAM’s latest proposal, dated August 13, but not released to members until August 19, still allows the dealerships to reduce a worker’s base rate pay based on productivity. It states: “Effective August 1, 2022, when a Journeyman Technician fails to average booked hours greater than 36 hours and those total booked hours are less than 90% of the average of all Journeyman Technicians hours, both measured during a consecutive eight (8) week period, the Employer may reduce the Technician’s weekly base pay. The reduced base pay will be the average booked hours times the 36.1 hourly rate up to a maximum 5% reduction.”

The current weekly base rate pay is a concession to the dealers. If mechanics remember the 2017 negotiations, they demanded 40 hours per week of guaranteed base rate pay, but after seven weeks of bitter struggle the IAM settled for 36 hours per week. This is far lower than what workers had asked for and closer to what the dealerships wanted.

If the IAM is capable of making concessions like this to the dealers, what else is it hiding?

According to its home page, Local 701 is seeking to have a contract by today. Workers have every right to be concerned that a deal imposed under these conditions will be a management-friendly sellout that will erode their living standards.

In response to the concerns workers voiced about the tactics being used to isolate them on the picket lines, WSWS reporters explained the significance of the struggle at Volvo Trucks in Dublin, Virginia this year and the powerful example that experience holds for workers everywhere.

Like the mechanics of Local 701, the Volvo workers were isolated by the United Auto Workers union and were put under immense pressure to accept a contract that workers had not yet had a chance to read, and which was filled with concessions. Rather than accept the UAW’s lies, the Volvo Trucks workers recognized the international character of their struggle and formed their own organization to fight for their interests, the Volvo Workers Rank-and-File Committee (VWRFC). The committee organized resistance to the repeated attempts by the United Auto Workers to force through a sellout agreement and issued their own set of demands based on their needs, writing statements that appealed to workers worldwide and gained international support for their struggle.

Whatever the outcome of the current strike, the fight is not over. As in 2017, the WSWS is the only organization fighting for an alternative to the nationalist, pro-company agenda of the unions. That alternative, through the formation of rank-and-file committees, fights for an independent political program for the working class and international solidarity in the fight against capitalism.