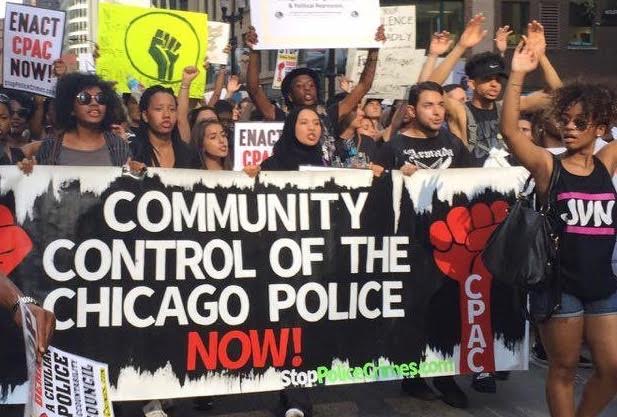 Above photo: Thousands marched in downtown Chicago on July 11 protesting the police murders of Alton Sterling and Philando Castile demanding community control of the Chicago police. Monique and Fightback News.

Chicago, IL – Chicago saw two developments this past week in the struggle for democratic control of the police by the Black and Latino communities in Chicago. First, after a long delay, Mayor Lori Lightfoot appointed the interim Community Commission for Public Safety and Accountability (CCPSA). This was created out of the passage of historic legislation in 2021, Empowering Communities for Public Safety (ECPS), the most democratic legislation for police accountability in the country.

Second, election season began on August 30, when candidates for municipal office can start circulating petitions to get on the ballot in February 2023. The February ballot will include first-in-the-country police district council elections. These police accountability councils are created by the ECPS legislation.

Frank Chapman of the Chicago Alliance Against Racist and Political Repression (CAARPR), said of these upcoming elections, “Our communities have suffered without a voice in policing for too many years. Now we are starting on the road to determine who polices in our communities and how they are policed.”

In preparation for the first day of petitioning, the CAARPR office on Chicago’s South Side prepared the petitions for more than 70 candidates for the 22 police districts in the city. Since last Saturday, the office has been a hive of activity. More than 50 candidates have already come to the office to receive their petitions. About 30 of the candidates so far are Black, as the Black community has always borne the brunt of police terror. Each passing day, more candidates make the decision to run.

District Councilors will work directly with people in their police districts to address issues with specific police officers and explore alternatives to policing for addressing harm. The council members also get to choose the pool of people who will become the permanent members of the CCPSA. The commission has much greater powers, including the power to rewrite the police rule book, and the power to select and fire the head of the Chicago Office of Police Accountability, which investigates civilian complaints against cops.

Among those running are familiar faces from the movement against racist policing:

In the press conference with the ECPS coalition earlier this week, Chapman said, “The district council elections in February 2023 will make the greatest democratic advance in the right of the people to determine their own public safety based on their long-standing quest for freedom, justice, and equality. There hasn’t been anything as powerful as this in the electoral arena since the Harold Washington campaign.”

Joe Iosbaker is cochair of the Labor Committee of the Chicago Alliance Against Racist and Political Repression. Iosbaker is also a retired member of SEIU Local 73.